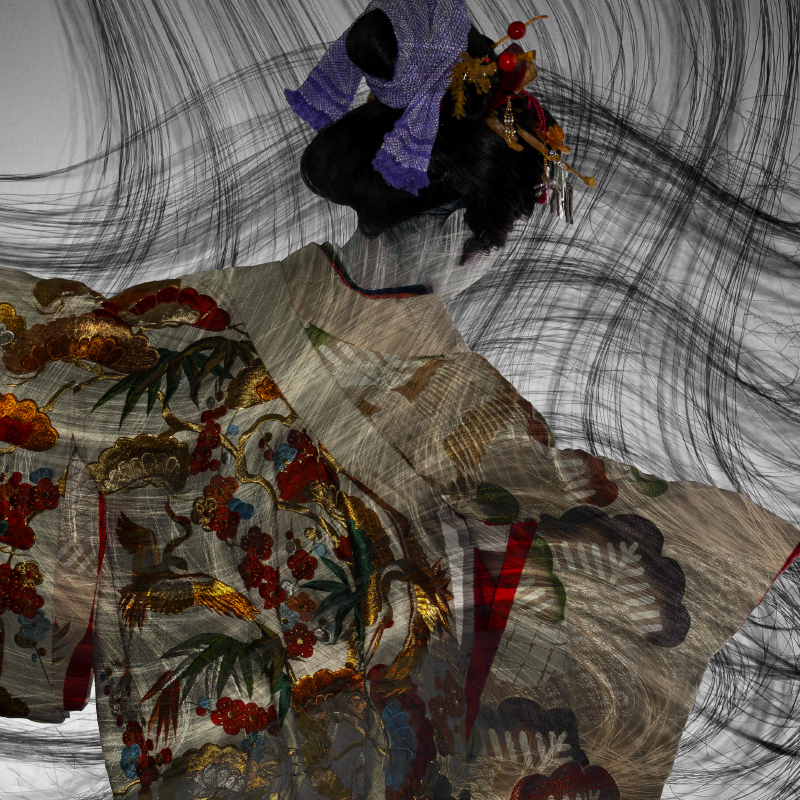 Yoshinojo Fujima (aka Rika Lin)’s approach to Japanese dance, which respects tradition with the curious eye of a twenty-first century artist, is reflected in the expansive title of her virtual performance at Links Hall, streaming May 15 and 16. “Black Hair” is the literal translation of “Kurokami,” a popular scene from a classic Kabuki play. The playful brackets and spelling in the word that follows layers references to the Japanese word for “good” and the emergent qualities of the character in her piece. The number in the first half of the title is a dodge of the number four—unlucky in Japanese culture as its pronunciation can be the same as the word for death—a private numerology reference to Fujima’s lucky number and, as she told me, “it makes it sound like your software update.”
The fourth iteration of Fujima’s Beyond the Box project was put on hold in 2020, but returns this year in a virtual format, with collaborators new and old, including two puppeteers: Chicago-based Tom Lee and Ryugyoku Nishikawa from Japan. Fujima, Lee and Nishikawa developed separate performances based on the Kurokami scene, focusing on what Fujima calls the “but actually” aspects of the story. The tale is one of heartbreak—a young princess falls in love with a Genji warrior who she must send into the arms of another woman for the good of the clan. The kurokami scene takes place the night of the warrior’s wedding, with our heroine at home, taking down and brushing her long, black hair.

“If you were to listen to the lyrics you might think she was a young naive girl being led on,” Fujima says. “It’s a progenitor of the country-western song, but the Japanese, enka version. One of the cool lines refers to how it’s snowing outside, there have been references to perhaps her once black hair is now white as snow—perhaps time has passed and she’s looking back. You pluck it away from the bearings of the play you can kind of go where you want with it.”

Out of necessity, Fujima took the story to film, collaborating with a director in Mumbai to capture three dance scenes, which reimagine a traditional version of “Kurokami” for shamisen—“It’s like if you asked Pavarotti to rap,” Fujima says—and builds to a finale with music from drumming group Tsukasa Taiko. “It might start out looking traditional,” she says, “but as it goes, you might think ‘wait a minute.’ The message is always look, always observe. You can’t think you know the deal; you have to stay pliable and open.”