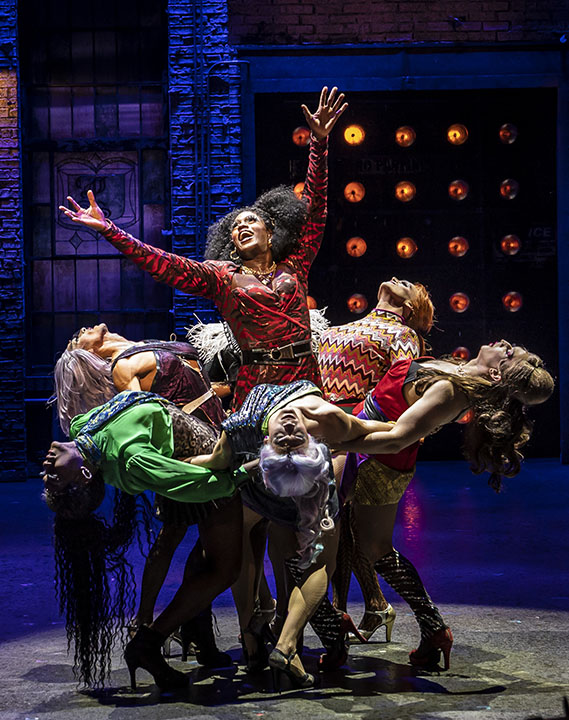 The first thing you notice stepping into the theater at Paramount is the electricity—and no, I’m not talking about the meticulously crafted, lit proscenium arch. It’s the hum of anticipation. Anticipation from an audience that, most likely, hasn’t been to live theater since the pandemic began. Hopeful excitement for the artists who can finally take to the stage, something their hearts have yearned for these past eighteen months.

What you’ll notice next could be something you’ll never forget.

As the lights dimmed and the music swelled, the audience erupted. I have only heard that chorus of hoots and hollers once before, for a performance of “Hamilton” shortly after it started touring. The cacophony of sound gave me goosebumps. I lost count of how many times I got goosebumps that night.

While I would never disagree with queen Cyndi Lauper or the great Harvey Fierstein, “the most beautiful thing in the world” isn’t shoes per se, it’s seeing the curtain rise after what feels like an eternity of dark intermission.

“Kinky Boots” is, in so many ways, the perfect foray back into live theater. Not only is it all about pivoting, something which many of us are now intimately familiar with, it’s a story about thriving. When Price & Son is facing closure, a serendipitous meeting of Charlie Price (Devin DeSantis) and drag queen Lola (Michael Wordly) inspires an idea: to create a line of women’s footwear for men. Thus, Lola’s Kinky Boots is born!

Unsurprisingly, this is Lola’s show. From the jump Wordly steals every scene he is in. Designed to the nines by Ryan Park and Katie Cordts, it’s no use taking your eyes off of Lola. The stage is set for her transformations. Even her name in lights shine like the brilliant ruby that she is. Wordly’s bravado is everything Lola needs, even in the heartbreaking moments. While there are scenes when others in the cast can be drowned out by the music, Wordly doesn’t miss a beat.

Matching Wordly’s vocal ferocity is Sara Reinecke as Lauren, one of Price & Son’s employees who has feelings for Charlie. Her “The History of Wrong Guys” sets the tone for this show’s powerful statements against misogyny and homophobia. Reinecke is an absolute powerhouse singer with a stage presence to match.

For a show so dependent on a strong ensemble, director-casting director Trent Stork had to find the right folks to bring “Kinky Boots” to life. Stork did that and more with this cast. Particularly with the Angels, Lola’s entourage, whose choreography, by Isaiah Silvia-Chandley and Michael George, sets the stage ablaze. Words apart from brava fail to give this group of angelic humans their due. You’re sure to see more of these talented folks in the future: Terrell Armstrong, Anthony Avino, Matthew Bettencourt, Christopher John Kelley, Anthony Sullivan Jr. and J Tyler Whitmer.

“Kinky Boots” was not well-received by critics when it opened on Broadway in 2013. This show can be campy, heartening, showy and bold. It sounds at times like “Rent” paired with the glitz of old Broadway. But right now, as the American theater is just emerging from a time of reflection and forced closure, as Broadway is about to open with a season where every new play is by a Black playwright, the American theater is having its own “Kinky Boots” moment.

If the themes of this show teach us anything, it’s that change should be welcome. After the last year and a half we all know how difficult change can be. And yet, that seeing-a-good-friend-for-the-first-time-in-a-long-time feeling hits as soon as the stage lights hum to life. Everything about this show tells us that change is good as well as prosperous.