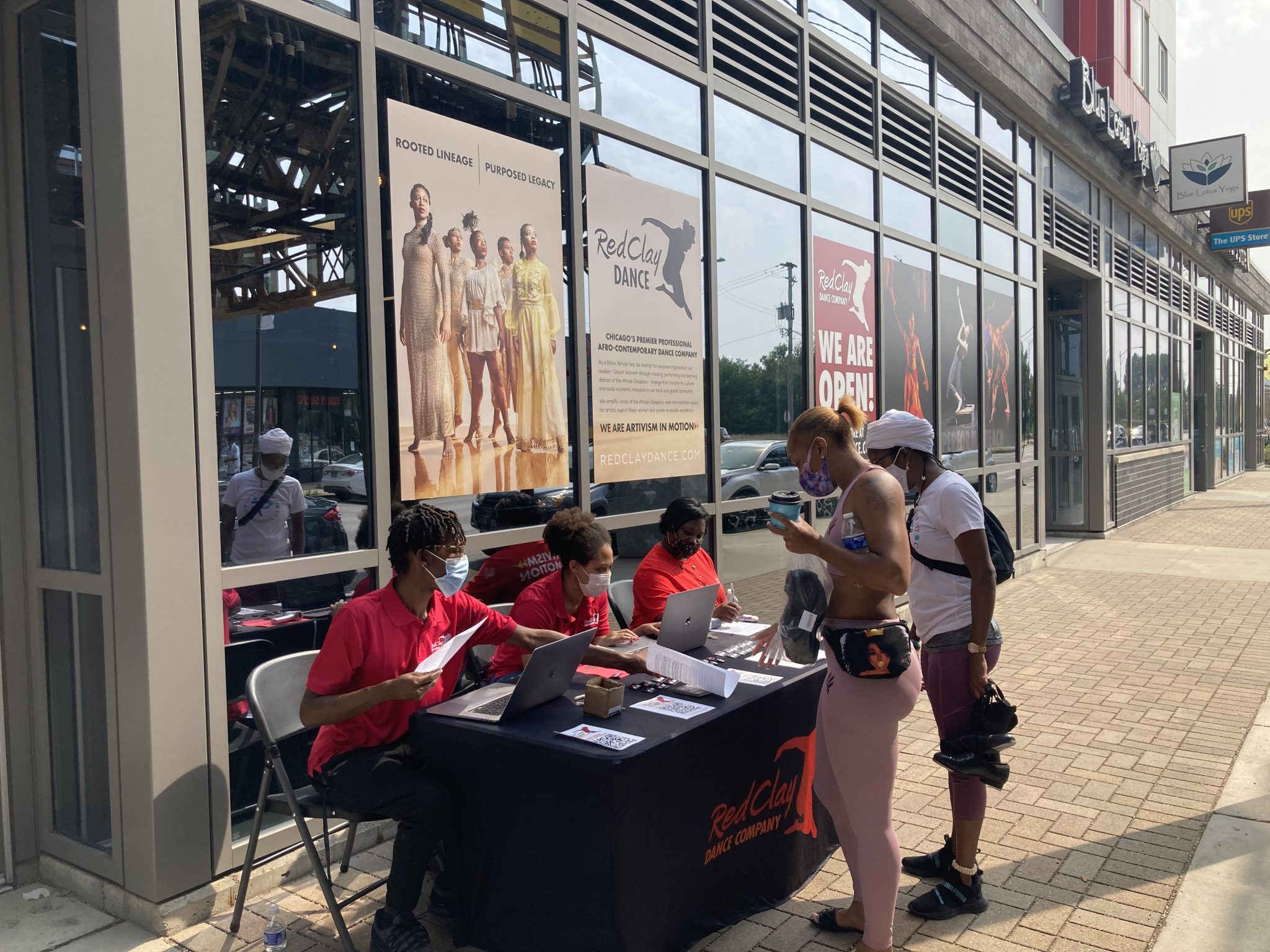 The original seed for Red Clay Dance Company was planted in the mind of Vershawn Sanders-Ward in Senegal, during a three-month training at École des Sables, Germaine Acogny’s celebrated school for traditional and contemporary African dance located in the small fishing village of Toubab Dialao. “She still has her school going, which is amazing to me because resources are so limited,” Sanders-Ward says between hugs and photos at the grand opening of Red Clay’s studio in Woodlawn. “Just seeing that impact, both culturally and economically. Everyone knows Dakar… No one knows Dialao. But artists come to her school from literally everywhere in the world, from Australia to Japan. “To build a place like that that can draw artists in and to know everyone in that community is benefitting: The hotel owner, the store on the corner. She was very intentional about that—being rooted in a place and knowing the impact the arts can have. I thought was genius.”

Fourteen years later, Sanders-Ward has cut the ribbon on her company’s first dedicated home in a location selected with the same level of intention. “We were going to find a community where we can have that impact,” she tells me. The Red Clay studios are in Woodlawn Station, a sleek new development at the corner of 63rd and Cottage Grove adjacent to the terminus of the Green Line El. Their neighbor to the west is the historic Daley’s Restaurant (also in a new space) specializing in comfort and soul food. To the east is a yoga studio and a UPS store. “I saw this and thought, ‘Okay, things are happening.’ 63rd is a commercial corridor, it’s historic in the Black community. We’ve been talking with the alderman about her thoughts and plans to bring it back—just like 55th, 53rd, 47th—to bring it back for the community to be able to shop and have access in their neighborhoods, to not have to travel.” 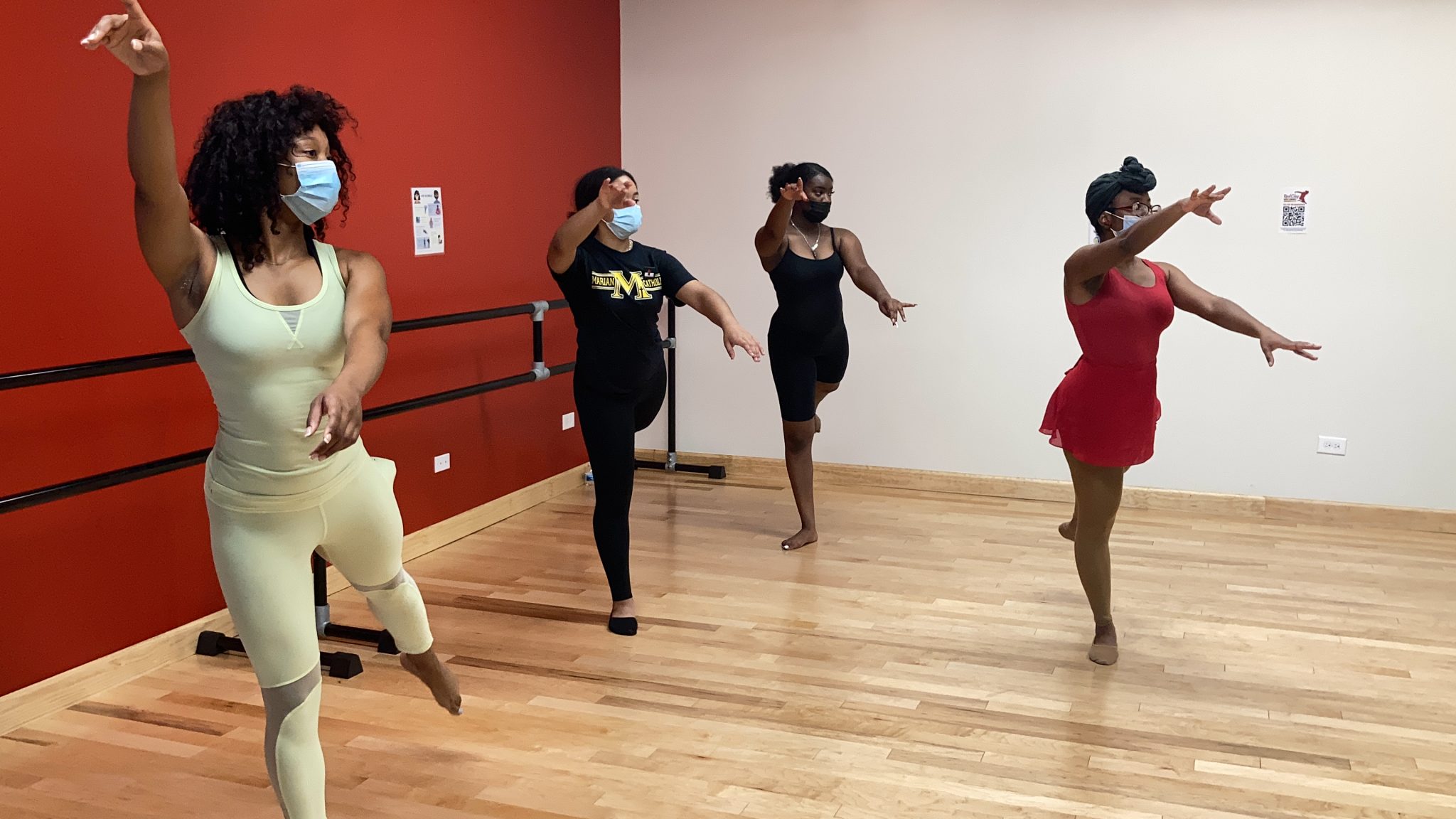 Commercial corridor revitalization can aspire to more than shops and restaurants, and it’s exciting to see an arts organization anchor a block. The impact of Red Clay’s presence on their grand-opening day could be felt as I descended the Cottage Grove station stairs. Friendly staff members greeted passersby at tables outside the entrance. The owner of the athletic-wear shop across the street stopped by to discuss how the two businesses could support one another. Mothers handed out flyers for a back-to-school fundraiser on the corner. Well-wishers flowed in and out, Sanders-Ward posed for photos with her parents. In an area where the long-term effects of redlining and decades of disinvestment is evident for blocks around, the telltale vibes of a vibrant, walkable neighborhood center were everywhere.

Sanders-Ward had been considering a dedicated studio for Red Clay for a few years, but the pandemic, which forced many other dance and theater companies into austerity measures, provided the final nudge for her to take the leap. To date, the company had rehearsed and occasionally performed in the Fuller Park Fieldhouse’s spacious gymnasium—until the doors of all Chicago Park District buildings closed for the pandemic. “Once the Park District closed there was no clarity about when or if it would reopen to arts partners,” Sanders-Ward says. “The summer was still only outdoor programming. I just couldn’t take the chance of not knowing about my organization. It’s been thirteen years; we need a space of our own. We’re at that point now.”

Red Clay has indeed been on a steady upward trajectory and seems ripe for its own HQ—largely thanks to a founder with fundraising and business acumen to match her creative aspirations. The company received a 2020 Black Excellence Award from the African American Arts Alliance; it was selected for a 2021 Chicago’s Cultural Treasures four-year capacity-building grant; and it is one of eight companies in the Chicago Black Dance Legacy Project, which provides general operating and marketing support courtesy of the Joyce Foundation. Sanders-Ward also reached out for help to Illinois State Senator Robert Peters, who she says was able to get capital dollars for the project written into his budget. This, along with the usual fundraising events and donor support, allowed Sanders-Ward to identify, sign a lease, build out and cut the ribbon on the company’s new home in less than a year…and amidst a global pandemic. There’s a reason Sanders-Ward’s title is artistic director and CEO. 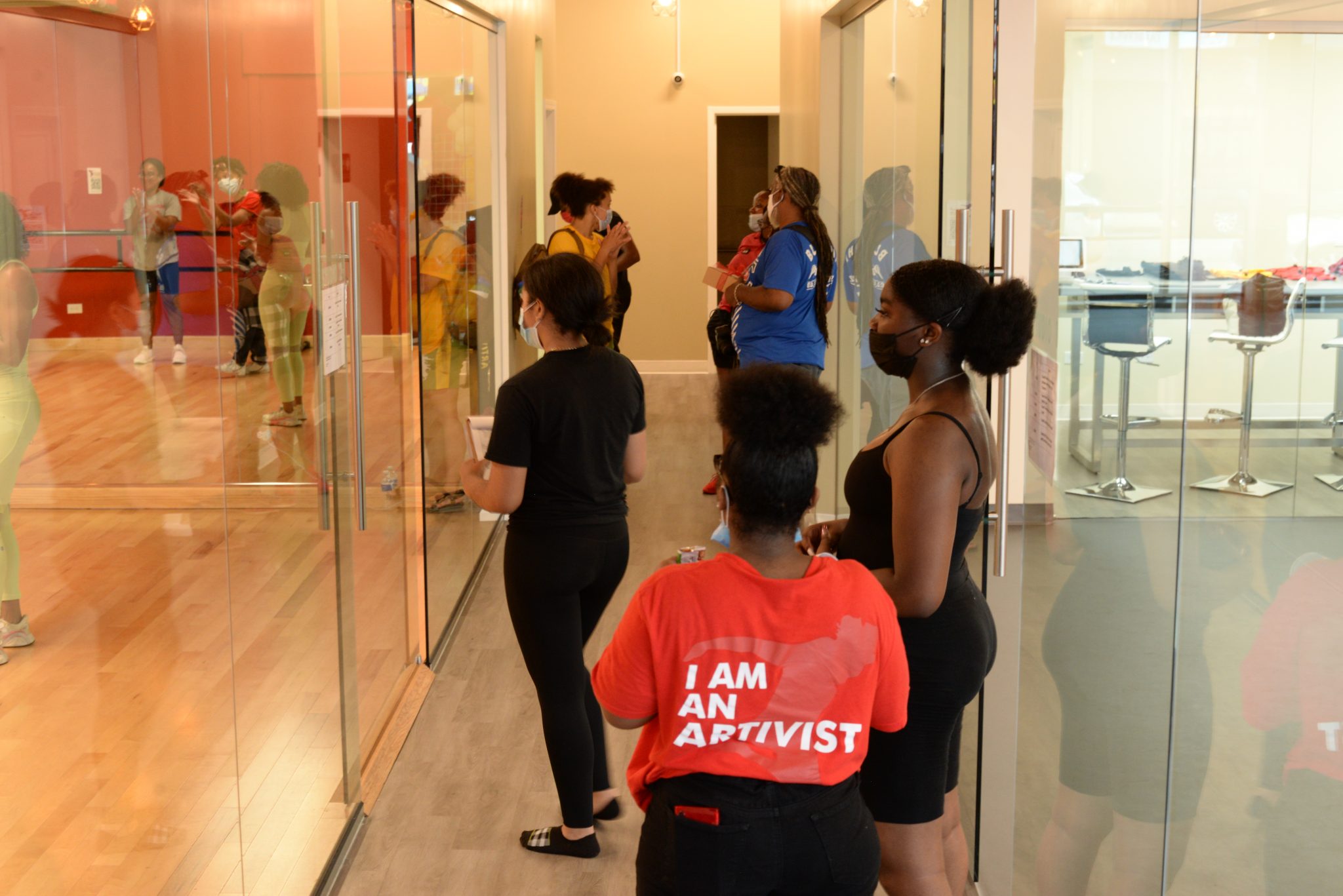 The Red Clay Dance facility is a sunny 3,700 square feet—the size of two storefronts—just large enough for two medium-sized, glass-walled dance studios (one with a Marley floor, one with wood), a couple of offices, a conference room, and storage for costumes and props. The main studio ceiling is painted black, allowing the room to double as a small performance space. As I waited in the conference room to speak with Sanders-Ward, I watched two free community classes in progress—yoga and House—gazing at masked youth and adults bouncing joyfully to the beat through the walls of one studio and into the next. The floor-to-ceiling glass frontage of the Woodlawn Station building afforded me a view through studio one to the backside of Red Clay promotional posters hanging in the windows, and out to 63rd Street beyond.

Board secretary Azeema Akram, who was manning the conference-slash-merch table when I arrived, said the visibility of the studio was already paying off; a passerby had stopped in just the other day to sign his daughter up for dance classes, saying he had been looking for just such an after-school activity in the neighborhood. With any luck these classes will continue, uninterrupted, in front of the mirrors and on the new sprung floors, but in the event pandemic restrictions tighten the two studios will be equipped with audiovisual gear, allowing instructors to live-stream classes from the comfort of the studio instead of their living rooms and kitchens as they had done for the last year-plus. That is, once the equipment arrives. Pandemic-related supply-chain issues and astronomical shipping costs have held up this last bit of construction. 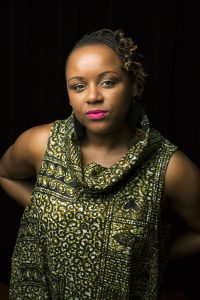 One Red Clay program likely to remain online is the Dance Pamoja Challenge, a family health and education program Sanders-Ward started in response to the pandemic. The project, created in partnership with University of Illinois Chicago’s medical department and ACCESS Community Health, brings streamed dance classes, nutrition coaching, blood-pressure monitoring and mental health services to families in their homes and free of charge. Sanders-Ward says that it’s uncertain if Red Clay will continue the partnership with UIC and is exploring other healthcare partners for Pamoja, including Sista Afya, a mental health clinic in South Shore that provides low-cost care to women and Black families. Even with easing restrictions, Sanders-Ward says keeping Pamoja classes remote makes sense for the comfort of participants with health issues.

I may be biased, but I believe every community should have a dance studio, for all the health and relationship-building reasons above. But do a quick Google map search for dance studios in Chicago and you’ll find a landscape that resembles so many others—be it availability of grocery stores, home ownership, income levels or wealth of residents: Abundance on the North Side (in this case clustered along the river, where former industrial spaces are plentiful and relatively affordable), sparseness on the South Side. The new Red Clay studios promise to be a resource not only to neighborhood kids and aspiring dancers, but also to professional dance makers in the city who need rehearsal or teaching space. For artists residing on the South Side, working in Woodlawn could cut back drastically on commute times and expense while connecting them to a new student base.

For these teaching and practicing artists, Sanders-Ward is considering a different model than the space rental arrangement typical at most studios. “I’m thinking about how we can build out a program—some sort of membership where artists can have access to the space for a certain amount of hours per month,” she says. “But not a residency either, because I know they need the flexibility—dancers need to rehearse when they need to rehearse. We don’t want to replicate what’s already in the city. Something that’s more of a member, or village member, feels more synergetic to our mission and more individualized. Then figuring out how many artists we can support in that model, feels more equitable in a lot of ways and what I think the community wants.”

When I ask about upcoming performances for the Red Clay company, Sanders-Ward, like many directors right now, is uncertain. The company will make a couple of appearances in the coming months—at Navy Pier and at the Women in Dance Conference to be held in Chicago this fall—but with the Delta variant on the rise, venues remain tentative about reopening their doors. “We’re not really sure about a spring concert, which we typically hold at the Logan Center. But they’re still unsure about reopening. We’re excited to get back but it’s difficult to plan if the spaces you normally use aren’t sure if they’ll have audiences,” she says. “We’re trying to offer what we can: Classes, rehearsing and the couple of shows we have booked.”

What Red Clay has to offer continues to grow and demonstrates how dance has a part to play in neighborhood revitalization.