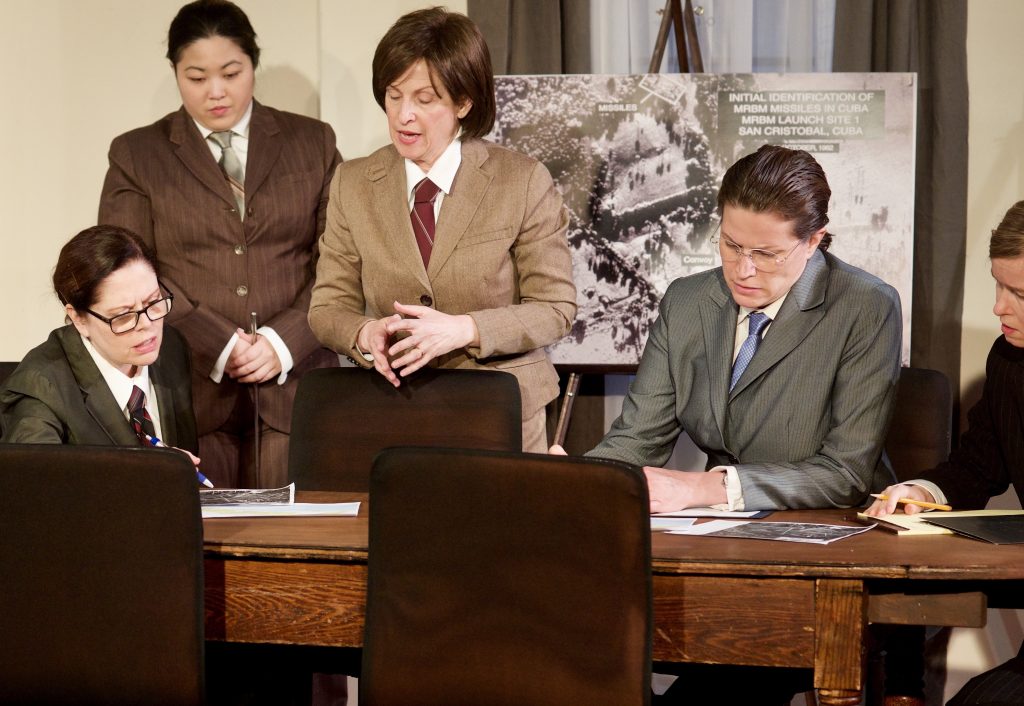 As the closest the world’s ever come to nuclear war, The Cuban Missile Crisis of 1962 was one of the most consequential geopolitical events of the twentieth century, an exercise in testosterone-fueled brinkmanship between President John F. Kennedy and the group of men who advised him, and the Soviet Union’s Nikita Khrushchev and his Kremlin inner circle. The roughly two weeks of engagement between the two superpowers remains one of the most dramatic times in many of our memories, so the decision of Brian Pastor to adapt and direct Robert F. Kennedy’s memoir of the event, “Thirteen Days,” for the stage seems like a natural.

On a stormy Tuesday in August, I visited City Lit Theater’s home at the Edgewater Presbytarian Church to take in the show’s second rehearsal. The cast and director were seated around a long table in a large, high-ceilinged but sparsely furnished room. A row of black-and-white photos of middle-aged white men were propped along a shelf on one side—they were former pastors at the church rather than the rogue’s gallery of Kennedy and Khrushchev aides I thought it might be at first. While the cast and director slowly conducted a table read of the script—slowly, because they would pause frequently to discuss the historical context for this almost-sixty-years-past event in a manner that reminded me of an especially engaged college classroom—my eyes were drawn to the actor playing aerial photography expert Arthur C. Lundahl. Kim Fukawa was knitting, an activity that Lundahl almost certainly did not partake in. For this production has made the intriguing decision to cast the entire show with women, diverse in race and age. In doing so, it not only offers female actors a rare chance to play roles wherein they wield the reins of political and military power, but audiences should find fresh insights into the role of race and gender.

I corresponded with Pastor about the genesis of the play and this production.

When did you decide to adapt RFK’s book into a play? Why?

Terry McCabe approached me with the idea while I was directing City Lit’s production of “J.B.” back in 2017. He had been really down since the 2016 election and decided to channel his energy into producing plays that acted as sort of a rebuttal to the Trump presidency. I was a history major at Northwestern, so the idea immediately appealed to me. It took awhile to get the rights, though. Tracking down the appropriate parties working with RFK’s estate proved difficult. Eventually, we got a contact close to Christopher Kennedy, shortly after he ran for governor. That proved the difference, and the agreement was in place very quickly.

I started writing in early 2019 and had a draft about eight months later. The goal was always to use RFK’s memoir as the structure and insert dialogue from the recently declassified EXCOMM tapes. It worked remarkably well, and I found that I could easily insert other primary source material, such as letters from Khrushchev or Adlai Stevenson’s speech to the UN Security Council. Just as we were going into rehearsals, the Trump administration bombed Iran. All of a sudden, the project had come full circle.

I know the all-male principal characters are being played by women. Is that baked into your adaptation, meaning did you write the roles for women? Or is that a production decision you’ve made in this case?

No, this is a production choice. The play can be performed by actors of any gender or background. I had success doing an all-female production of “J.B.” at City Lit, and I had just finished directing the remount of my gender-blind production of “Gross Indecency” with Promethean. Terry felt the show would be more powerful if a modern audience could more easily see themselves onstage, so we originally agreed it would be a gender-blind production. Eventually, we decided it would be more powerful if all the roles, historically embodied by white men, could be played by a diverse group of women. Generally speaking, I think you forget that you’re watching eleven women onstage within a few minutes of watching the play; the times it does register are usually for positive reasons.

What does that casting do to the narrative? Does it change or simply open up the understanding of what happened?

I think it reminds us that as recently as the 1960s, women and people of color were still being excluded from important decision-making on a national level. And there was no good reason for that other than our country’s long history of structural racism and sexism. In many ways, doing this play with all cis-white men would demonstrate a serious lack of imagination. It would feel irresponsible of me not to point out how problematic it was for all of the people in the room in 1962 to be white men. If we want the audience to believe that this story is important in 2021, we must avoid making it feel like a time capsule. Having the production be in constant conversation with the material in a pronounced and visual way helps it avoid feeling like a museum piece.

This production was postponed due to the pandemic. Was it already in previews when that happened? How has it evolved, if at all, in the ensuing months? Did you keep the cast and production team?

Yes, the show was in previews when we were shut down by COVID-19. I got the call a few hours before our final preview and just twenty-four hours before we were slated to open. It was heartbreaking, of course, but City Lit’s commitment to going through with the production when things opened up again has been wonderful.

We were able to keep nine of the original eleven cast members, for which I am infinitely grateful. These talented women believed in the production and in my ability to help them bring it to full life, and most of them signed back on without hesitation. That’s particularly meaningful given how much life has changed for all of us during the pandemic. The entire crew is back as well.

How do you think the Cuban Missile Crisis plays to younger audiences? What do you see as the story’s contemporary relevance?

I’m certain that many of the folks that will see the production were not alive in 1962 when the Cuban Missile Crisis happened. I think one thing that this play teaches us is that perfection is unattainable, but good results can still happen when intelligent and motivated people that truly care about humanity are involved in decision-making. I’m not interested in hero worship. JFK was a complex and flawed individual, but that’s part of what makes him human. What makes him worthy of admiration is his patience, respect, thoughtfulness, and ability to learn from his mistakes. If you’re like me, you felt a great deal of relief after the 2020 election, not because our current president is perfect, but because we believe that he cares about the health, safety and happiness of his fellow citizens.

The Cuban Missile Crisis was almost a disaster of biblical proportions, many times over. The disinformation, the incorrect assumptions, and the eagerness by some in the room to look or act strong nearly led to all-out nuclear war. But it didn’t. So we owe it to ourselves and to future generations to tell this story and learn from it before it’s too late.

Yes, I’m inclined to believe that audience members reeling from a nationwide shutdown and 600,000-plus American lives lost will find value in a story about people striving with every ounce of their being to stave off disaster. In fact, I’m certain of it.