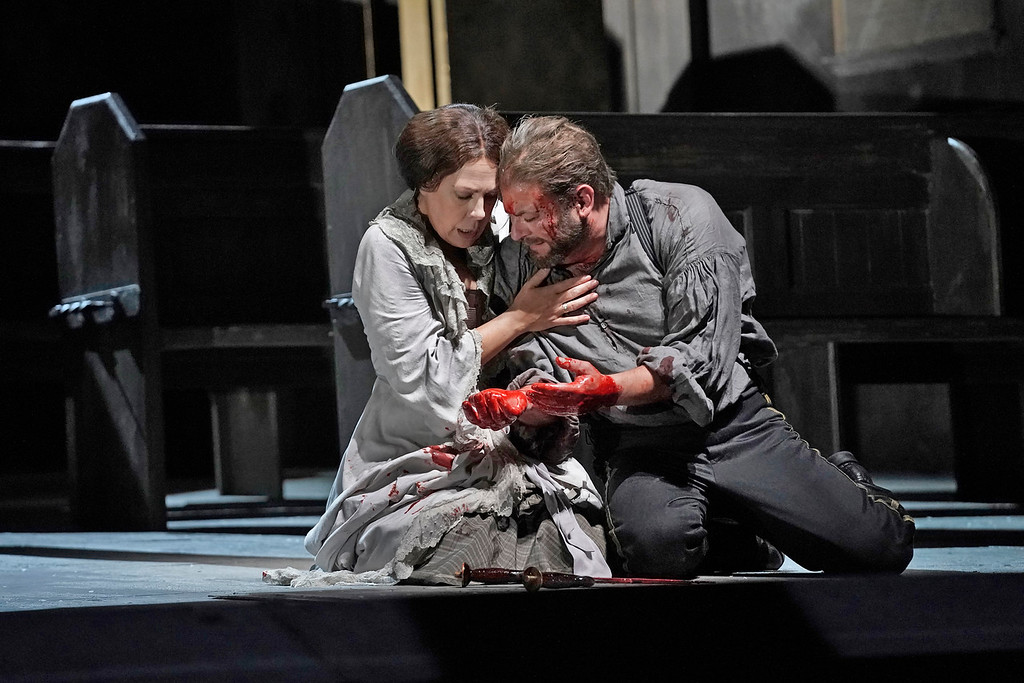 “Well, here we are!” general director, president and CEO Anthony Freud made this simple announcement to the opening-night audience, and they answered in thunderous applause. After eighteen months of near-silence in Chicago’s largest opera house, the patrons—who had proven that they were fully vaccinated and agreed to be masked throughout their evening—were welcomed back by Freud and board chair Sylvia Neil. The pair reviewed the successful ventures that the company has undertaken during its mainstage hiatus, and thanked Lyric’s audience and benefactors for their unwavering support throughout. But despite the palpable excitement of the crowd, without a red carpet at the door or an Opera Ball following the performance this year, there was a feeling of quiet humility at the core of the event. Fewer audience members than usual decked out in tuxedos and gowns. Far more was lost during this time than a “Ring Cycle,” and that cloud seemed to weigh on the shoulders of the retuning audience.

This pensive atmosphere made Verdi’s “Macbeth” an excellent season opener, with its useless deaths at the hands of those who cared only for their own power. Director Sir David McVicar, set designer John Macfarlane and lighting designer David Finn’s new production took us into an underworld of treason against humanity in which Shakespeare’s famous tale rang with familiarity. At the podium for his first official night as music director was Enrique Mazzola. Chorus master Michael Black’s army of seventy-two of Chicago’s finest singers created the massive sound and ethos required by Verdi to point up his nationalistic fervor, all of the soloists acquitted themselves well, and the company’s orchestra was never better as they presented the “Paris Version” of Verdi’s revised 1847 opera, which premiered in the French capital in 1865. In those twenty years, Verdi had taken great strides in his journey to find a musical voice unfettered by the strictures of the bel canto ethic, and the resulting changes to the score—alongside the sections of the opera that worked too well in the original version to be excised—create a landscape of upheaval that matches that of the story’s machinations.

Singing the titular antihero, bass-baritone Craig Colclough was well-suited for the part in every way. In her role debut as his Lady, Sondra Radvanovsky gave a performance that almost made one wonder if Verdi knew she would be along eventually and wrote it just for her. Vocally and histrionically the role requires everything and, at the height of her powers, Radvanovsky is unstoppable. Christian Van Horn gave his usual multilayered characterization. While his aria was delivered in a full-throated passion that sent the audience spinning, Van Horn’s height seemed to have caused him to frequently be placed upstage of the other principals, which may be responsible for a lack of balance at times during concerted sections of the score; his voice would have benefited from more of a presence in those proceedings. Tenor Joshua Guerrero’s Macduff provided the heart of the story, his acting more than sufficient to be transferred to a high-level, non-musical production of Shakespeare’s play, his brilliantly delivered aria answered by one of the audience’s longest ovations of the evening.

This production cowers in the dark, dirty corners of a shell of an old church, spilling out when the intrigue can no longer be hidden. While evocative, the persistent darkness, even when the stage was filled with choristers, kept me from seeing their faces, a fault in an otherwise exquisite production which hopefully will be corrected. McVicar works harder than necessary to convince us that the story is about the children who will eventually carry on the power of the throne. Three children roam about the set, seeming to direct the action, react to the story, and sometimes take on characters who appear in visions; less of this might be more. A tableau of Lady Macbeth with the children during one of Macbeth’s arias fights the text. But this is picking at nits. McVicar has made a bold choice and given us something new and fresh. That is his responsibility as director, and he has responded handsomely.

This production stars the chorus and orchestra, and it is impossible not to consider Mazzola’s energy and expertise as the driving force in this. Black’s chorus is always world-class, but here they chew the text with a new hunger, unsparing in their word-painting. There were times when the chorus was clearly a conglomerate of soloists, joined in telling a story in harmony, rather than a choir creating merely a homogenous sound. This chorus-mob was living the text. The orchestra seemed to play full-out, yet never covered the singers, which can be a challenge in this opera house.

Lyric has opened this season—which we hope we will see all the way through, coronavirus permitting—with a production that is delivered open-throttle by everyone involved, from the unhinged duo at the core of the drama to the chorister so far to the back of the pack that they were merely another shadow on the set. This is a production where none of the artists are playing it safe. One can almost smell the blood. (Aaron Hunt)