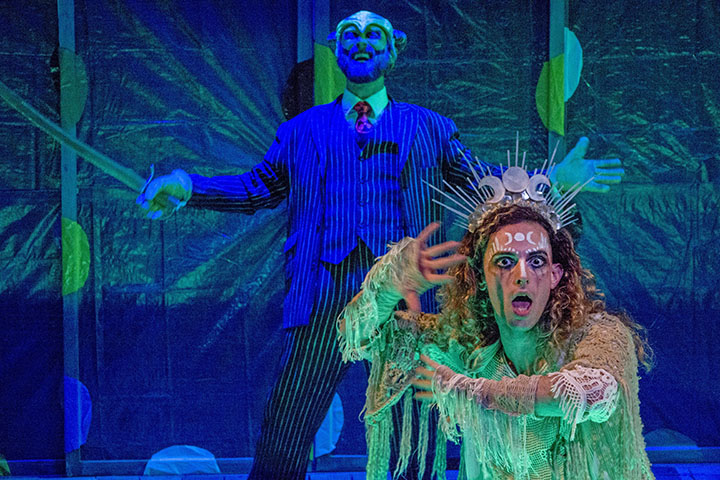 When Forward Theatre Company in Madison, Wisconsin produced “Mr. Burns, a Post-Electric Play” in 2016, I saw it twice. This dizzying, “Twilight Zone”-esque piece of theater mesmerized me in a way I couldn’t articulate. Playwright Anne Washburn succinctly crafted a show that demonstrated the cyclical nature of human storytelling, theater and life itself, all in the span of three hours.

That was a simpler time. Before we accumulated mask collections, perfected sourdough starters and binged the Netflix equivalent of the Springfield Tire Fire—”Tiger King.”

Suffice it to say “Mr. Burns” easily became one of my favorite plays of all time. And, in sitting in the audience at Theater Wit for the first time in over eighteen months, the show has undoubtedly cemented itself into my personal favorites where it will indefinitely remain.

This three-act apocalyptic fever dream gives brilliant insights into what could happen should the nuclear power plants break down causing radioactive illnesses, death and destruction. In act one, we find a group of survivors trying to piece together a 1993 “Simpsons” episode titled “Cape Feare,” a nod to the 1991 psychological thriller of the same name (minus the final ‘e’.) By act two, seven years later, that same group of folks are now a touring theater troupe performing “Simpsons” episodes from memory for other groups of survivors.

Then comes act three, seventy-five years later than act two, when the original survivors are long gone but their work in forming a “Simpsons” canon has morphed the show into a new-age Greek theater. “Simpsons” has become lore, popular music from the before times (think Britney Spears) has become like a chorus. Donning Greek-inspired masks, the stage version of “Cape Feare” feels familiar, as if we’ve been here before.

Lines throughout “Mr. Burns” sting like unwanted déjà vu of the last year-and-a-half. When one character remarks, “People are not competent,” I visibly shudder. When characters reminisced on the weeks of warning officials they had to prepare for the inevitable destruction, chaos and death, I closed my eyes for a moment as a chorus of soft sighs came from the masked faces around me. This play, as witty as it is, no longer requires suspension of disbelief. We believe it because, in many ways, we’ve lived it.

Artfully directed by Jeremy Wechsler, Washburn’s imaginative play takes on a veneer of real-life dystopia. The found-materials costuming style of act three, created with genius by Mara Blumenfeld and Mieka van der Ploeg, gives the performance an air of realness. Of course Homer’s pants are made from an oversized Ikea tote and Lisa’s dress is a made from Doritos bags. Did you expect something different?

“Mr. Burns” is the kind of play that can be staged in a wide variety of ways. In no way does it have to be rooted in realism. It can be absurd, wacky and outrageous like the cartoon that inspired it. But Wechsler and his team didn’t have to do those things because they’re playing to an audience who knows what it’s like to suddenly realize the world is fragile. Theater Wit understood this assignment.

Don’t attend this play expecting to turn your mind off for a while. You won’t leave this show with the weight of the world lifted off your chest. Instead you’ll be treated to Daniel Desmarais’ delectable operetta, Will Wilhelm’s winning falsetto and Andrew Jessop’s meticulous Mr. Burns. You’ll see an airtight ensemble giving their all while simultaneously reminding you that we will endure. Even if “Mr. Burns” doesn’t melt away your worries, it will provide much needed distraction from the world outside the Belmont Avenue theater.

Never before has the phrase “art imitates life” felt so pointedly poignant.