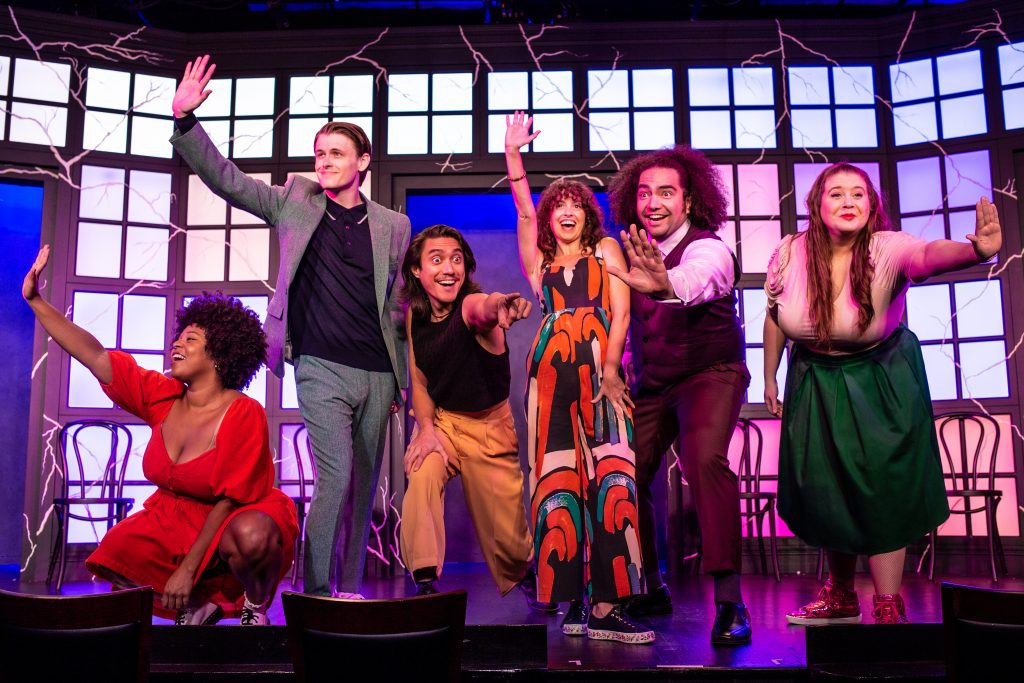 At opening night for the first new production at The Second City since, well, everything happened, the front couple rows of seats nearest the stage were taken up by the elephant in the room, or rather, the herd of elephants in the room. The front of the house was left empty due to COVID restrictions put in place by the actors’ union requiring ten feet of physical distance between the audience and the stage. And adequately addressing the elephants was perhaps too much to expect out of just one comedy company. After all, live theater is coming back, too, and folks are happily going to see ballet, Shakespeare and Broadway musicals without placing the burden of all that has happened on their first production since the pandemic began. But we expect sketch comedy to filter history in real time, a burden amplified by the fact that “Saturday Night Live” does it every week on television. And so we expect answers from Second City.

Since the last original production debuted at Second City’s Mainstage more than two years ago, we’ve been through the pandemic, the murder of George Floyd along with the racial reckoning that followed, and the presidential election and the insurrection at the U.S. Capitol that followed not too months later. Not to mention the upheaval at Second City itself, as longtime company owner Andrew Alexander ended up selling the whole thing as a way of firing himself.

With all that weight on their shoulders, the company’s 109th revue gets off to an inauspicious start with too many obvious jokes related to the pandemic and an uncomfortably unfunny airflight framing device that seems to be abandoned, thankfully, in the second act. It’s almost as if director Anneliese Toft got the cast together at intermission and killed it.

When dad (Adam Schreck) tries to bond with his high-school-aged son (Evan Mills) but confuses Dua Lipa with Duolingo, things kick into hilarious gear. To the father, his queer, somewhat androgynous and perfectly normal son epitomizes the kind of effortless cool that dad’s best efforts—at one point he just spurts out “TikTok!” like it’s some kind of mantra—fall hopelessly short of. A line (paraphrased from memory) might be a metaphor for Second City and its relationship to a twenty-first century audience: “I know you love me, it’s obligatory, dad says. But do you like me?”

In another savvy sketch, a family wedding reception goes off the rails when the nephew DJ Spotify—played with larger-than-life affability by Jordan Savusa, a trait he carries throughout the show—performs a song that calls out the newlyweds for their participation in the insurrection at the Capitol on January 6. It’s more clever than funny, but we’ll take it. 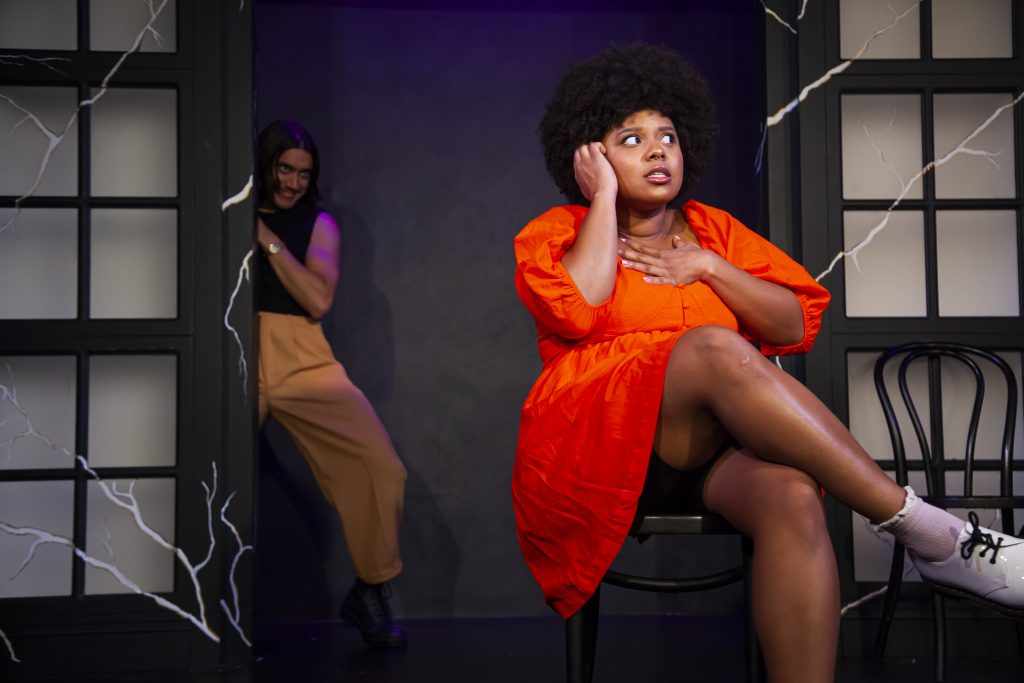 New cast member Evan Mills shows potential to be a breakout star. In one sketch with a twist ending where he plays a stalker, his physical and facial contortions—those eyes!—are Ernie Kovacs meets Snidely Whiplash.

Otherwise, it’s the women in the show who make the biggest impression. In one sketch, all three gather for a post-pandemic girls night out and work through their social anxiety in an awkward, raunchy, surreal explosion of TMI, infused with audience-interaction improv.

If you come expecting to see comedy revolution, you’ll be disappointed by this comfortably conventional Second City show. Overall, this particular revue feels more improv-infused than I remember in past iterations, incorporating suggestions texted in by the audience rather than shouted out as in the past. This gives it a properly visceral feel, as if the comedy is too fresh to write it down yet, let alone to memorize it.

As to those aforementioned elephants, the show does better with the pandemic and politics than race. The murders of George Floyd and Breonna Taylor and the subsequent racial reckoning don’t show up till the second act, when ebullient cast member Asia Martin performs a song that suggests the audience should Venmo her, in a form of micro-reparations. It’s funnier than it sounds, and just as uncomfortable as we deserve it to be. Unfortunately, the specific turn of events at Second City itself is never addressed.

Nevertheless, the final song is kind of perfect—funny and schmaltzy and heartwarming all at once, as the cast sings, “if the world ends tomorrow, you would still have today.”

If we can’t find resolution, catharsis will do.