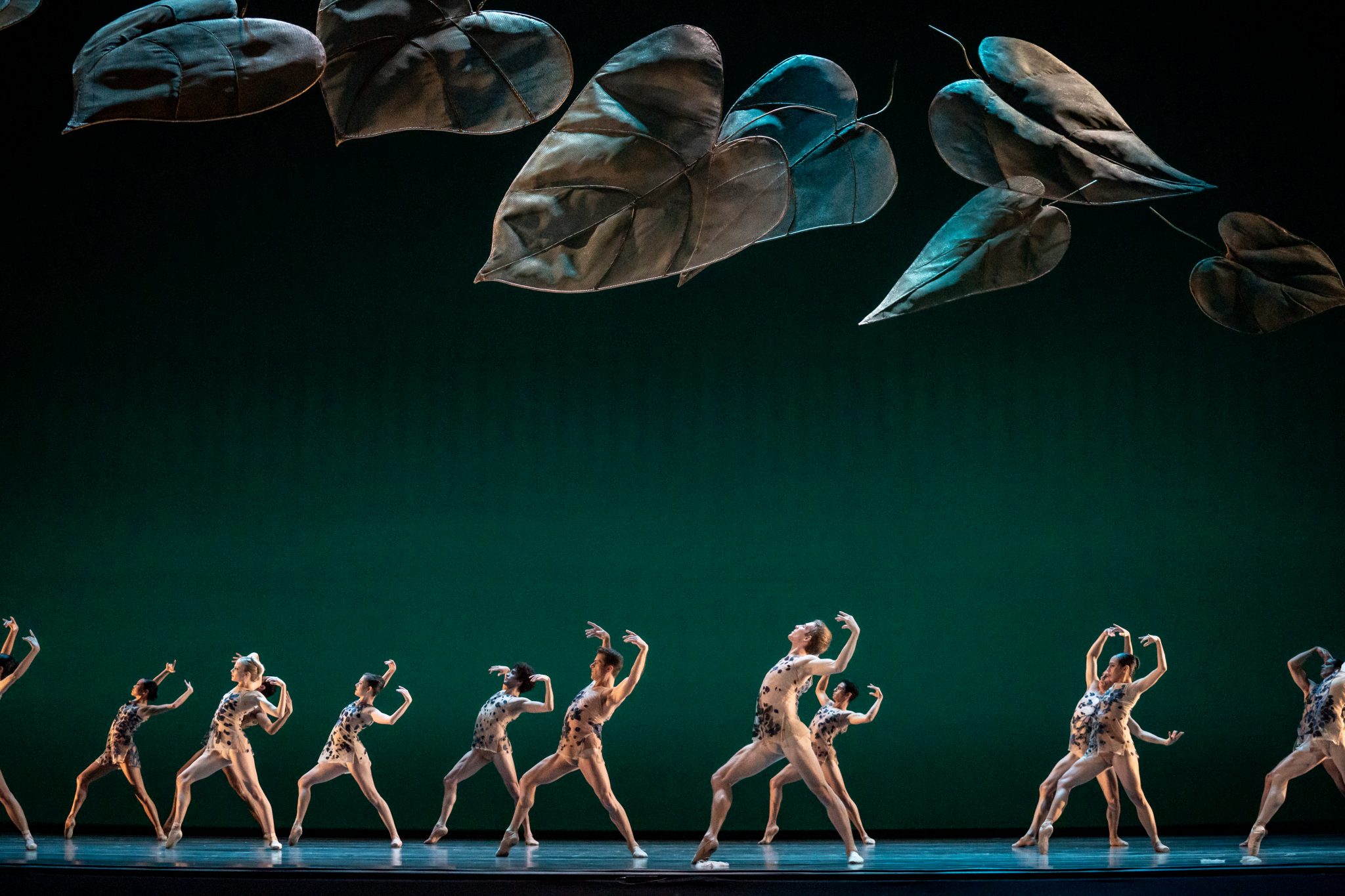 The Joffrey Ballet in “Under the Trees’ Voices” /Photo: Cheryl Mann

After more than a year-and-a-half of COVID exile, the Joffrey Ballet has made a triumphal return to live performance in its new venue, the Lyric Opera House. Its four-part program, “Home: A Celebration,” playing through October 24, is a blast of pure kinetic and sonic energy, which is simultaneously polished and propulsive. As shaped and executed by artistic director Ashley Wheater and music director-conductor Scott Speck, the show is very much of this difficult time, but its life-affirming passion and drive point toward a more human, less threatening and fragmented future.

For the last twenty years, the Joffrey has been ensconced at the majestic Auditorium Theatre, and not all ballet fans will be thrilled with the move to the acoustically less-perfect and architecturally less-significant Lyric. Nevertheless, the venue, with its larger stage and greater scheduling flexibility, was filled on opening night with dance-starved spectators, virus be damned. The audience was treated to a varied, intelligent and technically superb evening of traditional and modern ballet, complemented by musicianship and stagecraft that were always sharp and expressive, and often enthralling.

“Home” begins with Joffrey co-founder Gerald Arpino’s “Birthday Variations,” a nod to the company’s illustrious past. Garbed in soothing pastels, and gently lighted against a black background spangled with stars and crystal chandeliers, the dancers leap and spin to the music of Verdi through a series of massed scenes and solo variations. The piece neatly demonstrates the troupe’s technical mastery. But for all its rococo shimmer, the work comes off as dramatically inert, and the ensemble, while precise and elegant in effect, lacks the individual charisma to bring it to life. The best moment is the pas de deux of Amanda Assucena and Alberto Velasquez, which exudes a dreamy, floating eroticism.

Very different in form and tone are “Swing Low” and “Under the Trees’ Voices,” two Joffrey creations that received their world premiere in virtual form this spring and bear the identifying marks (or scars) of our own era. “Swing Low”—choreographed and costumed by Chanel DaSilva and conducted by Michael Moricz to music by composer-cellist Zoe Keating—is a brooding meditation on the theme of death and transfiguration, which hits close to home at a time when the Grim Reaper is more intrusive than usual. The panther-like Fernando Duarte leads the cast of five shirtless, denim-clad male dancers, four of whom bear wide-spanning wings and thick eye paint. The first impression is that of a gender-playful burlesque on Victoria’s Secret. Soon, though, the combination of Keating’s bass-heavy score, with its hint of Native American rhythms, and the dancers’ restless, surging movement, creates an atmosphere of nearly hallucinatory intensity. It’s a glimpse of the soul in transition, crowned by an angelic apotheosis. To those of us here on earth, this rich and entrancing new dance offers the solace of faith and the promise of hope.

“Under the Trees’ Voices”—choreographed and costumed by Joffrey rehearsal director Nicolas Blanc with music by the talented Ezio Bosso, who died at a tragically young age in 2020—also has an element of fantasy, but of a more pagan flavor. Dressed in sheer, shadow-speckled fabric on a set dominated by gigantic, scrim-like yellow leaves, courtesy of designer Jack Mehler, the dancers could be the fairies from “A Midsummer Night’s Dream,” translated to late autumn in an enchanted woodland menaced by deforestation and climate crisis. Bosso’s score, while distinctly modern, is reminiscent of Vivaldi’s cycle of moods in “The Four Seasons.” The golden light and mournful adagio melodies early on move toward a lively, harmonious finale. As with “Swing Low,” the effect is magical, especially during Christine Rocas’ achingly lonely solo under a single, suspended autumn leaf.

The evening’s final offering is a new take on an old warhorse, Ravel’s “Bolero.” This too-familiar tune—described by the composer himself as “fifteen minutes of orchestration without music”—is transformed by choreographer (and dancer) Yoshihisa Arai into something strange and provocative. Soloist Anais Bueno, a performer of surpassing poise and beauty, gives the composition’s unrelenting repetition a nightmarish quality, as her initially seductive jazz moves break down into spasmodic gestures of fear and rage. Fortunately, Bueno has the dance and dramatic chops to pull off this demanding role. She’s aided by some fine orchestral playing, especially in the woodwind section. While the piece won’t suit all tastes, Arai’s deconstruction of the music’s overheated sensuality nevertheless produces some of the evening’s most haunting moments.

“Home” is a multi-sensory delight that pulses and glows with bodily grace and spiritual fire. It serves as a joyfully reassuring homecoming for this world-class company, a crown jewel of Chicago’s cultural scene. My only quibble is the lack of a printed program to serve as souvenir of a memorable night. But what matters is that, after a prolonged layoff, dance on the highest level is back in Chicago, providing artistic pleasure and inspiration to a public in need of both.