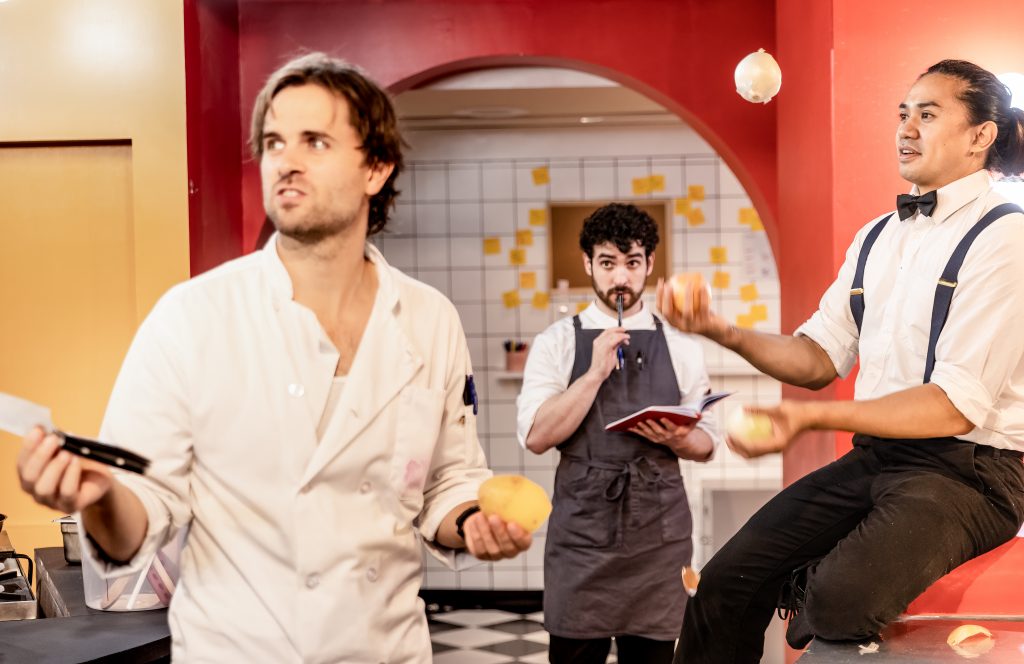 Two press nights were offered for “A Recipe for Disaster” and I chose the second due to a conflict. When we showed up and were handed a flyer containing the menu for The Contumacious Pig, the fictional restaurant now occupying the lower-level private dining area at Petterino’s in the Loop, I saw the words “Influencer Night” and groaned internally, regretting that I’d missed what must have been the legitimate “press night.” Turns out I was wrong; the influencer night is the setting of the show and clearly Rick Bayless and Co. have even less respect for this new media species than I do.

Bayless has earned his celebrity in the foodie world with great restaurants, most notably Frontera and Topolobampo (open since 1987 and 1989, respectively), gourmet grocery brands and one of the best cooking shows ever on television, “Mexico: One Plate at a Time.” He’s increasingly a player in Chicago theater as well, with a foundation dedicated to funding the art form, and now this, his second foray (after “Cascabel” at Lookingglass) into the creative side, this time writing but not acting.

“A Recipe for Disaster”draws upon Bayless’ decades of culinary experience to turn the theater of fine dining into theater itself. In this classic farce, ably steered by director David H. Bell, the requisite doors are formed by the entrances to the bathroom, the kitchen, the dining room, the cooler. The buzzy restaurant, known for its signature dish of roast suckling pig, has a night where everything that could go wrong does, from an AWOL head chef to an unexpected health inspector to a bit of competitive espionage and sabotage. Not to mention the sous chef who accidentally takes the wrong drugs, the pig that arrives without a USDA stamp of approval, and the influencer stealing serveware. The audience, meanwhile, is seated throughout the restaurant and occasionally interacts with actors in their roles.

It’s a lot to pack into a ninety-minute or so show without an intermission and it mostly succeeds, with a cast that feels “real” in their roles—no doubt a few of them have worked in hospitality at some point, as so many actors do. The pace is brisk, almost frantic, with sometimes as many as three conversations going on around the restaurant, creating overlapping dialogue that really worked. After all, in a real restaurant, we have to make eavesdropping choices, too, and the plot here is never confused by this technique.

Though realism has no place in farce, the over-the-top characterizations of influencers and loudly righteous vegans can be a bit much, like an oversalted dish, and the health inspector seems especially incompetent. However, the restaurant employees, from chef to bus boy, are treated with affection by the show, even when they’re at their bumbling worst. It’s easy to see where Bayless’ loyalties—and his contempt—lie.

And the food and drink? Excellent, if not Frontera great, except in one intentional (and ingenious) case of bad soup. While the “bread” in the Bayless name might draw you in like it did me, it’s the “circus” that will make your night.