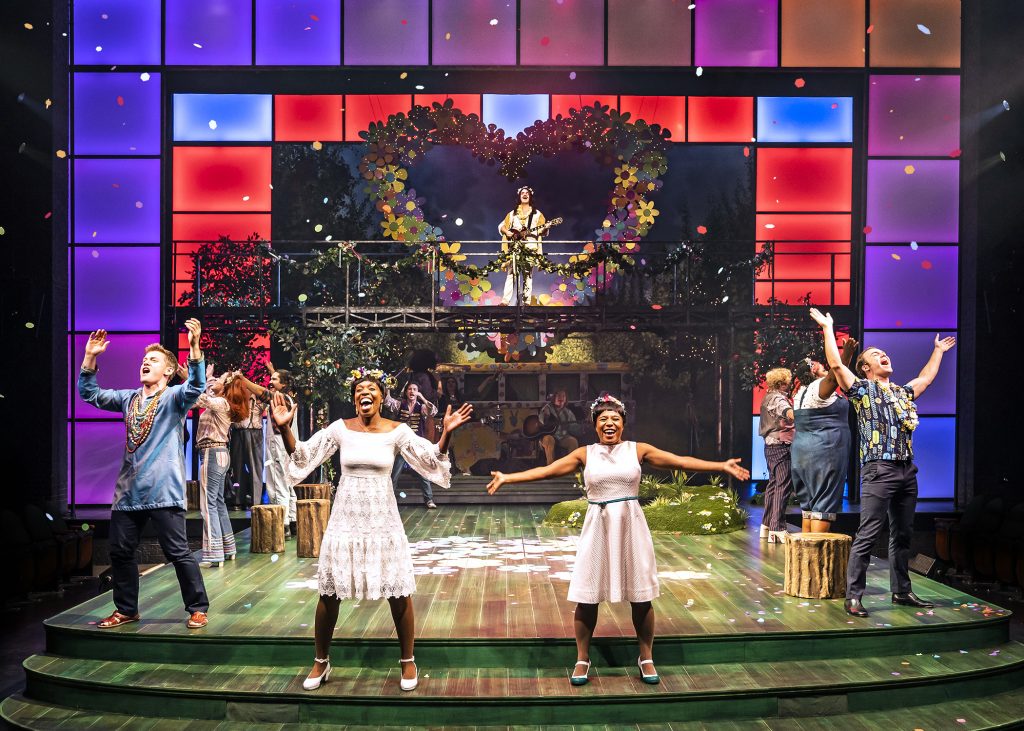 The company of Chicago Shakespeare Theater’s production of “As You Like It”/Photo: Liz Lauren

A pastoral comedy is just what the doctor ordered to ease our way out of our recent confinement. Chicago Shakespeare Theater obliges with its bright, energetic tale of souls fleeing death and duplicity and finding peace and love in the woods, “As You Like It.” But it’s not all Shakespeare. This production is a mingled yarn of the Elizabethan comedy classic and twenty-four songs by The Beatles. The action still takes place in the enchanting Forest of Arden, although the enchantment this round is the Magical Mystery variety, complete with a flower-powdered VW bus and a Peter Max-colored stage. The main props on stage are tree trunks, so magic mushrooms must be near. Like the verse in the play, the selection of Beatles’ songs mostly ply the fields of love, but stray, too, to other topics, such as money, sunshine, loneliness (banishment) and foolishness. You can guess the tunes. Here’s a small hint: One of the band members plays trombone. The songs slot into the action well, and are often surprisingly spot on. One other surprise is that this pastoral paste-up spins not “Strawberry Fields Forever.” It’s nothing to get hung about; we still get to marvel at two creative forces separated in life by three centuries, but knit together by their gifts to turn phrases, poetical and musical.

As in a more standard version of the comedy, wrestling plays a role at the start. In this version, we’re taken to a 1960s pro wrestling ring, where the future wooers and lovers fall for, and on, one another. The actors don’t go full Dick the Bruiser, but the spoof of the sport has plenty of faux body slams and moonsaults. There’s lots of non-Shakespearean banter in the scene, so we are clued in that we’re going somewhere new. The square ring belongs, of course, to Duke Frederick, the power usurper—Kevin Gudahl as a sleazy swinger à la Penthouse founder Bob Guccione, circa 1969—who peers down on the mayhem as punches fly and band plays. Dukes, pro wrestlers, a rock band? O Jupiter, it’s a duke-box-musical! 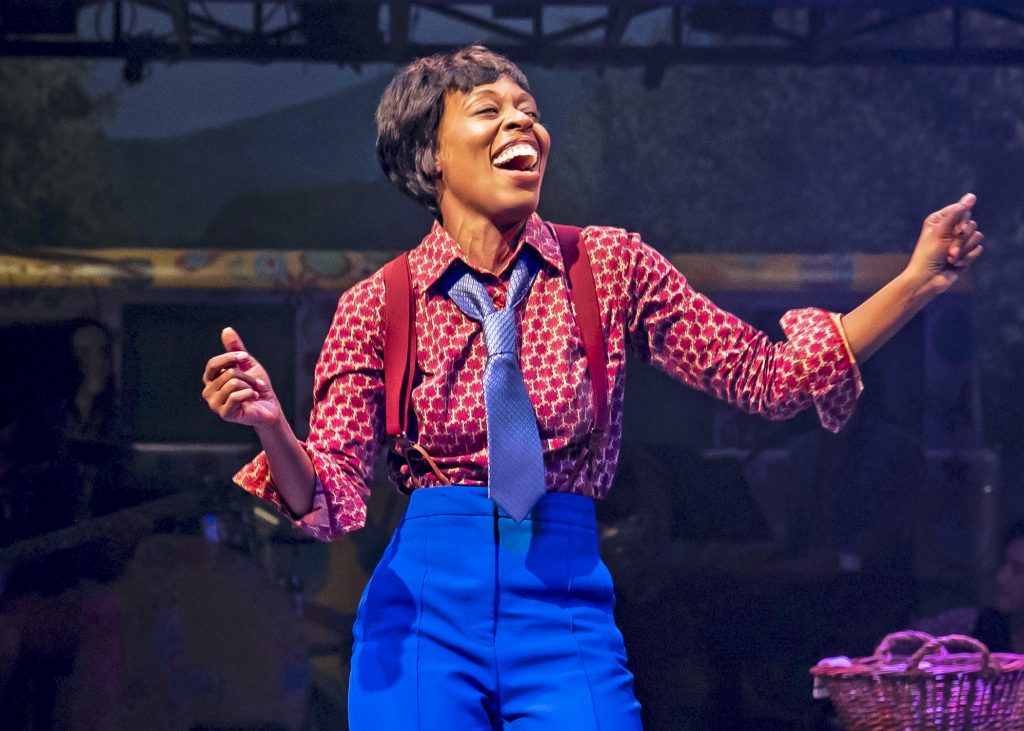 Rosalind (Lakeisha Renee) find that love is all she needs in Chicago Shakespeare Theater’s production of “As You Like It”/Photo: Liz Lauren

The rest of the cast includes some of Chicago Shakespeare’s, and the city’s, best actors. They mostly give the Shakespearean bits their proper, comprehensible due. The mode of comedy, and clever choreography, is broad. It sometimes borders on the old-school-but-now-cringeworthy, particularly in overuse of childlike, doe-eyed and dewy, milksop schtick between the play’s lovers. The excess of cartoonish fluster robs the comedy of what can be a bubbling hot sexual energy. But, this production is arguably a musical above all and in musicals the playing’s the thing. And the singing. On that score, it is a success. The wonderful Heidi Kettenring, as Phoebe, offers a beautifully moving version of “Something” that is, well, something. Is there anything in the play that Austin Eckert, new to Chicago Shakes, cannot do? A lovely singer, he’s a master on guitar (in a Hendrix wig) and as Amiens, gifts us with “While My Guitar Gently Weeps.” Lakeisha Renee has a sweet, compelling legit voice that brings new meaning to several songs, most penetratingly in “You’ve Got to Hide Your Love Away.” Deborah Hay’s searing, haunting “The Fool on the Hill” nearly pushes The Beatles version out of mind. Lechrisa Grandberry is a stunning singer who has performed widely in Milwaukee and in this production has the secondary role of Audry. Hopefully Chicago will see, and hear, her more often. Several of the band members ably double in the action on stage. So much for them being merely players in this playful show.

“As You Like It” at Chicago Shakespeare Theater, through November 21.