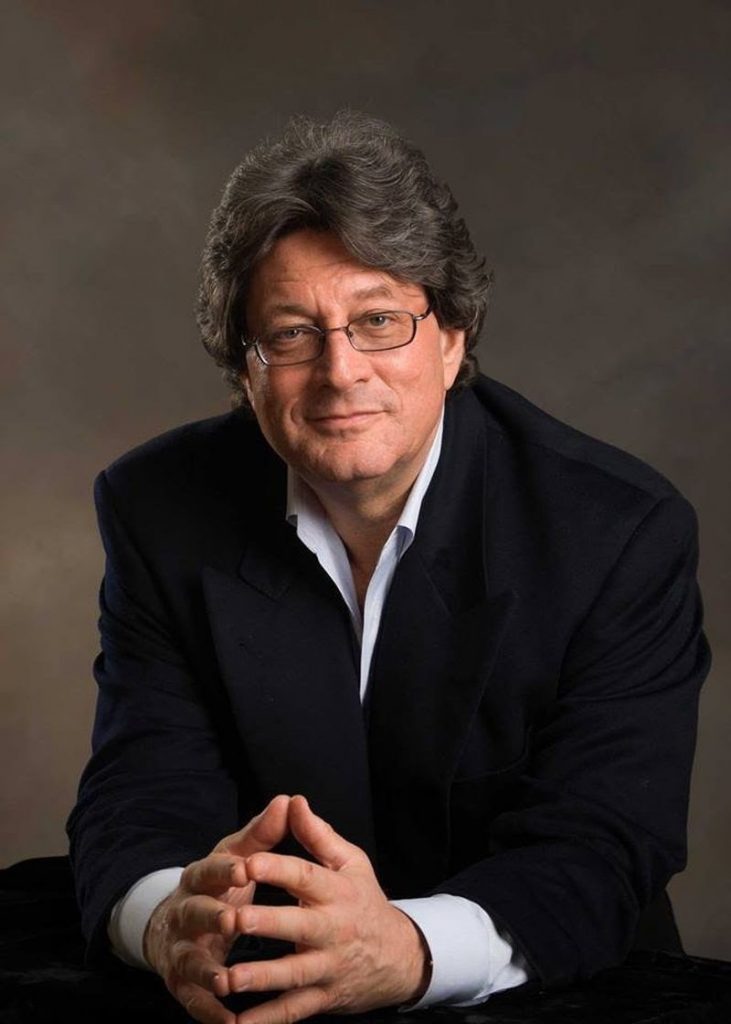 It’s a warm fall Saturday morning in downtown Chicago. Horns are blaring. Pedestrians scurry by. Few notice that the rolling lights of the marquee of the Nederlander Theatre are on so early in the day, impressively illuminating the “Paradise Square” moniker.

In the alley behind the theater, huge, isolated pieces of black scenery temporarily block easy passage, gleaming in the bright light of day. Escorted through the stage door, a production assistant guides anyone entering, whether cast, crew or curious critic, to the COVID test station. A quick, long swab up each nostril; results in ten minutes.

Going into the theater while waiting for results, a crew is onstage putting together pieces of what is obviously a complex set. “It will take them another week to fully load in,” volunteers the assistant. A cast member introduces himself and talks about the dance warmups needed for the show. “You’re COVID-free!” comes the verdict.

Descending deep within the bowels of the building, a small elevator takes us, it is said, to the lowest level of the theater. Large, colorful framed posters of past productions line the basement walls.

Entering the large rehearsal room, it is surprising that it is so jam-packed with people for such a remote and isolated part of the building. Cast members are standing, but relaxed in places marked by masking tape of multiple colors. A dozen seated people surround them on two sides, some writing on notepads, others typing on laptops. Two black spinet pianos and a drum set take up the far wall. Every person in the room is masked, including cast, until or unless someone has a line or a song lead.

Even with a mask, producer Garth Drabinsky at a table in the center of the room is clearly recognizable with his bushy hair, now gray. We share a quick hello since we had done an interview in this same building twenty-three years earlier for the opening “Ragtime,” which Drabinsky produced, and he also oversaw a $30 million restoration of this theater. He invites me to join him, next to a production assistant taking copious notes by hand on everything that is transpiring.

The stage manager calls order and director Moises Kaufman begins energetically walking the cast through the final scene of Drabinsky’s new show, “Paradise Square,”verbally dissecting every element. The dialogue between the Black and white cast is sometimes volatile but the working atmosphere is collegial and familial. Cast members raise issues and make suggestions. Egos are left at the door. Lines viewed as extraneous are cut. When meaning is unclear, lines are changed. Show composer Jason Howland is accompanying the cast at the piano and thanks an ensemble member for a spontaneous suggestion tried and adapted about paring back the chorus for one verse of a song to heighten the buildup of the next verse. 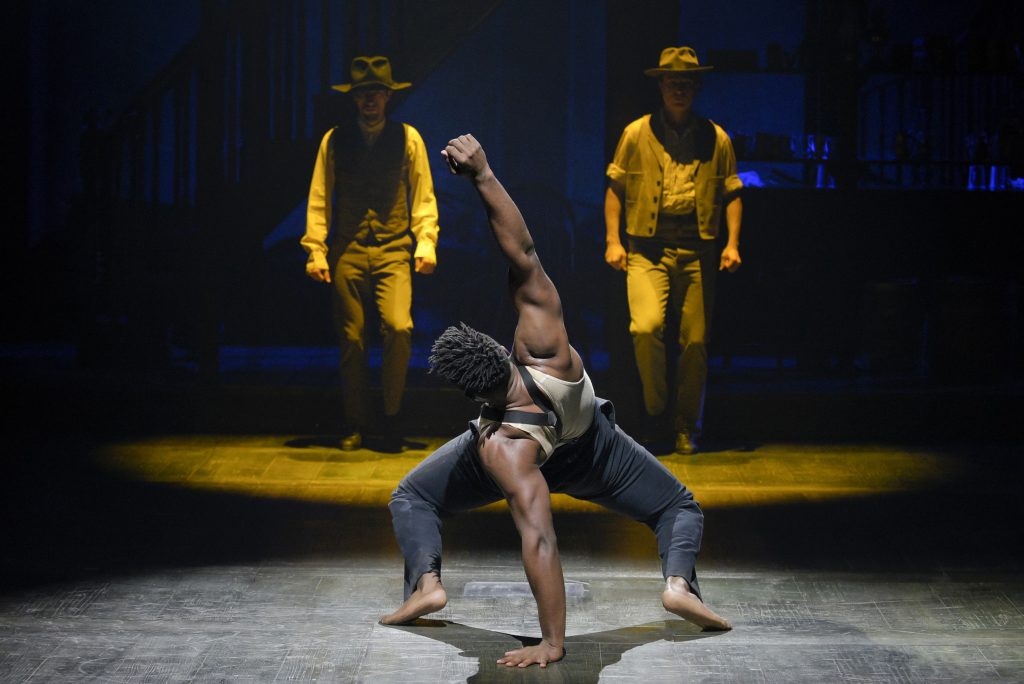 The premise of the show is a pre-Civil War Irish and African-American neighborhood that existed in New York prior to the 1863 Draft Riots.

Kaufman warns the cast of a “director cry alert.” “I can’t get through the finale without crying.” When Joaquina Kalukango movingly starts into the show’s climactic number a few feet in front of us, Drabinsky turns and whispers, “She’s Juilliard-trained.”

As lunch is called, we head to Drabinsky’s dressing room. The familiar cane he used in the nineties due to childhood polio has since given way to a walker. An assistant is nearby but Drabinsky takes every deliberate step himself. A steaming bowl of soup served in patterned china is waiting for him with a few crackers. “This is my only chance for sustenance.”

“It’s still a work-in-progress, but hopefully you get a sense of it,” says Drabinsky, settling in. “There is another ending that we had that’s just as emotional.” Has a final decision been made about which to use? “No.”

Has Chicago changed, I wondered, since Drabinsky was last here in the late 1990s, laying the groundwork for what became Broadway in Chicago?

“The city is still architecturally glorious, the people are still Midwestern-hospitable. The integrity of the population, I think, is at hand. I love this city. You know, I would move here in a second. If there was any other city I would live in North America [aside from Drabinsky’s native Toronto], it would be Chicago.

“The Irish and African-American history here and the demographic of the city is incredible and perfect for the show. I don’t know of a better city to reflect what the show is about than Chicago.

“Chicago popped up in ‘Show Boat.’ The Palmer House and this and that. It just had a history. The two years I did ‘Joseph and the Amazing Technicolor Dreamcoat” here with Donny Osmond. ‘Aspects of Love’ at Lyric Opera. All of that and then doing ‘Show Boat’ at the Auditorium Theatre.

When asked about what else has changed since Drabinsky worked here regularly, Drabinsky takes a deep breath. I thought he might address how the rather public fall of his once mega-company Livent or his 2009 conviction and subsequent prison time for fraud and forgery had changed him, but he cast his net more widely.

“No one could have been prescient enough to see the immigration formula blow up and see America turning deaf ears on immigrants during the Trump era.

“Then to see the hideousness of racism raise its profile and to watch the aftermath of George Floyd as if it was 1965 again with protests and marches in the streets such as leading up to 1968 in Chicago. I had lived through that experience in my lifetime and thought I would never have to live it again. But there it was.

“And to hear the insanity of the rightwing response of ‘No vaccination! No vaccination!’ Are you kidding me? God has allowed a vaccination to materialize in such a short time to heal the world, and you’re turning your backs on that? When I lived in a polio isolation hospital when I was three-and-a-half, where I lived with kids in iron lungs who were being wheeled out every night three, four, five at a time, dead the next morning? And you are even questioning for a millisecond whether or not you are going to be blessed with getting a vaccination? The insanity of that is simply incomprehensible.

“What has changed? The entire population seems to have changed. That’s what has changed. There has been an attempt to rip down the entire fabric of the country. Nothing left standing. When you start dealing with voter rights legislation and are not able to get unanimity on legislation for the basic tenets of life when there is such economic disparity in the country. To watch this country come to the precipice of anarchy, to the precipice of losing its hard-fought democracy. Having lived so much in America over the years and watching it happen from outside the country just tore my heart apart.”

A key change and culprit in assisting all of this, as Drabinsky sees it, has been social media. “There is so much more to life than a phone, than a computer screen. Sitting in a concert hall and listening to the majesty of a symphony orchestra is worth a year of being on Facebook. This manipulation of a population of kids who don’t know how to communicate anymore, who can’t talk to each other. This is what pushes me to want to produce theater to get people to think, to reflect. To be provoked to conversation into change, into understanding where they are in respect to the historical struggle of the evolution of culture, the evolution of a population.” 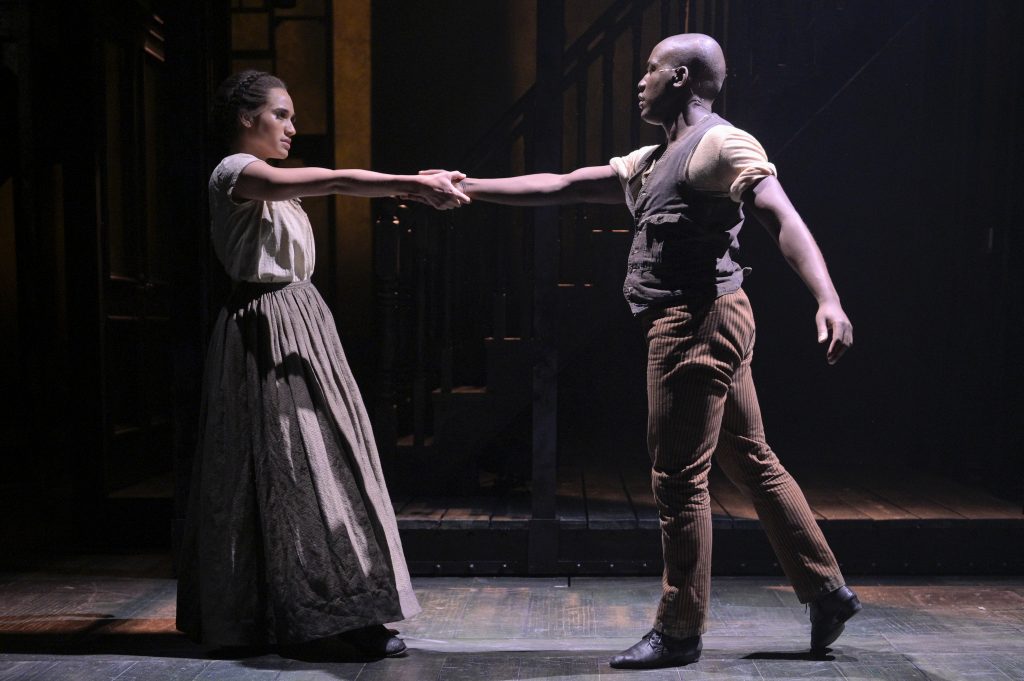 When workshopping “Paradise Square” in early 2019 in Berkeley, California, Drabinsky says the Shubert family came to see it and wanted to bring it to New York. “We made plans to do that in spring 2020 but then, boom. The pandemic hit. Not knowing when Broadway was going to reopen, I said maybe we should be coming to one other place before New York. I remembered the embrace of the city of my work in the past and thought, what about Chicago? What about my theater? I made the decision to come to Chicago in December of last year and then the Barrymore Theatre opened for us around June. So really Chicago predated the final opportunity to come to New York.”

Given all that has transpired, what was it like for Drabinsky to return to a theater he restored twenty-three years later?

“It was a completely surreal experience. What can I tell you?” Did Drabinsky have to pinch himself? “Yeah. Beyond. I said to my cast the first day that it’s very seldom that a cast gets to work with a producer who also built the theater. In this day and age, that doesn’t happen very often.

“And the diversity of this show, its scope, its drama, its intensity, its emotion: everything that ‘Ragtime’ was, this is as well. This is the most powerful show that I have had my name on. It’s certainly of the same genre as ‘Ragtime.’ I think it will go down in that same legacy of show. I can’t say more than that until you see it. But I think you’ll feel it.”