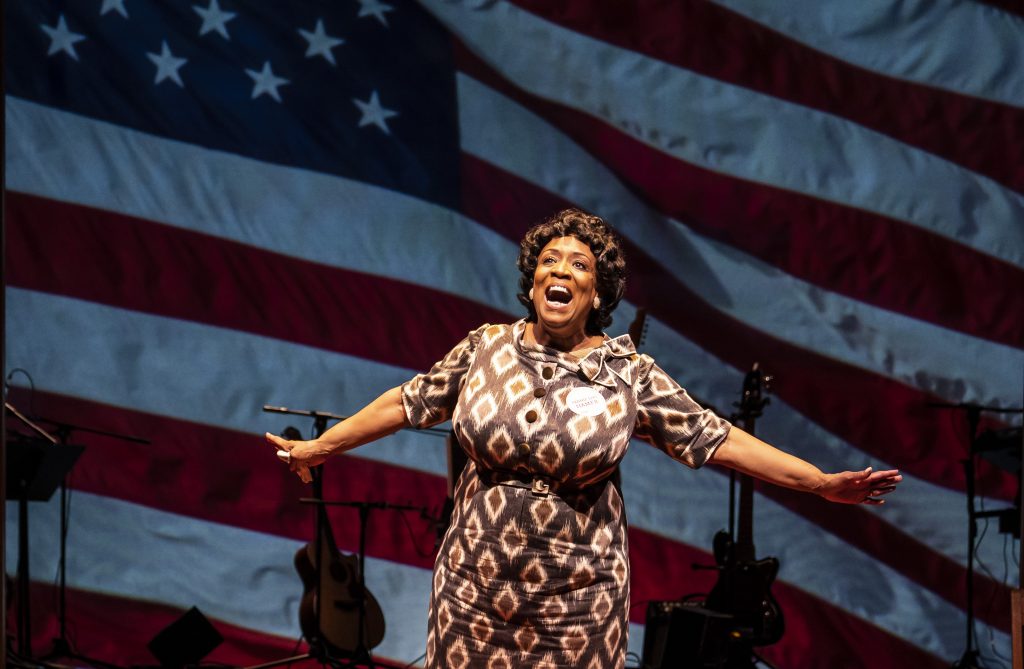 When we think about icons of the civil rights movement, most of the names we remember, with the exception of Rosa, are men: Martin, Malcolm, Andrew, Ralph, Jesse and John. Playwright Cheryl L. West makes the case to add Fannie to that list with her new one-woman show, “Fannie (The Music and Life of Fannie Lou Hamer).”

Hamer rose from cotton picker on a plantation into a pivotal activist in the sixties, starting with her fight for the right to vote in Mississippi in 1962, and extending to her co-founding of the Mississippi Freedom Party and its battle to be seated at the Democratic National Convention in the face of an all-white delegation from her majority-Black state. She organized the Freedom Summer alongside the Student Nonviolent Coordinating Committee, and became an accomplished public speaker, combining a sharecropper’s plainspoken wisdom with the singing of spirituals.

For this she was met with brutal violence from police and white supremacists, along with a marginalization among some of the other movement leaders who thought her lack of education and rougher edge were not the image of leadership they wanted to advance. The latter might explain her relative diminishment in the public consciousness since her death in 1977.

West has chosen a musical framework to tell Hamer’s story, also drawing from her speeches to construct a short but powerful case that this singular force in American history deserves to be a household name alongside the men.

And the Goodman, led by director Henry Godinez, has cast a singular force in Chicago theater, E. Faye Butler, to play Hamer. Butler’s Fannie fills the theater with her powerful presence and soaring singing, even overwhelming the annoying sound-system malfunction on opening night that tried and failed to drown her out with feedback.

Butler performs with so much energy and sings with such vigor you have to wonder how she does it every day. Opera singers, after all, get days off between performances to restore their vocal cords.

Faye’s Fannie is a real crowd-pleaser, with the show at times feeling like a revival meeting, where audience members audibly respond to snappy lines or clap and sing along with Butler and her crackerjack band trio.

I’ve always said that when you see the name E. Faye Butler on a cast list, you just buy a ticket. Good luck trying to resist.

At the Goodman Theatre, 170 North Dearborn, through November 21.