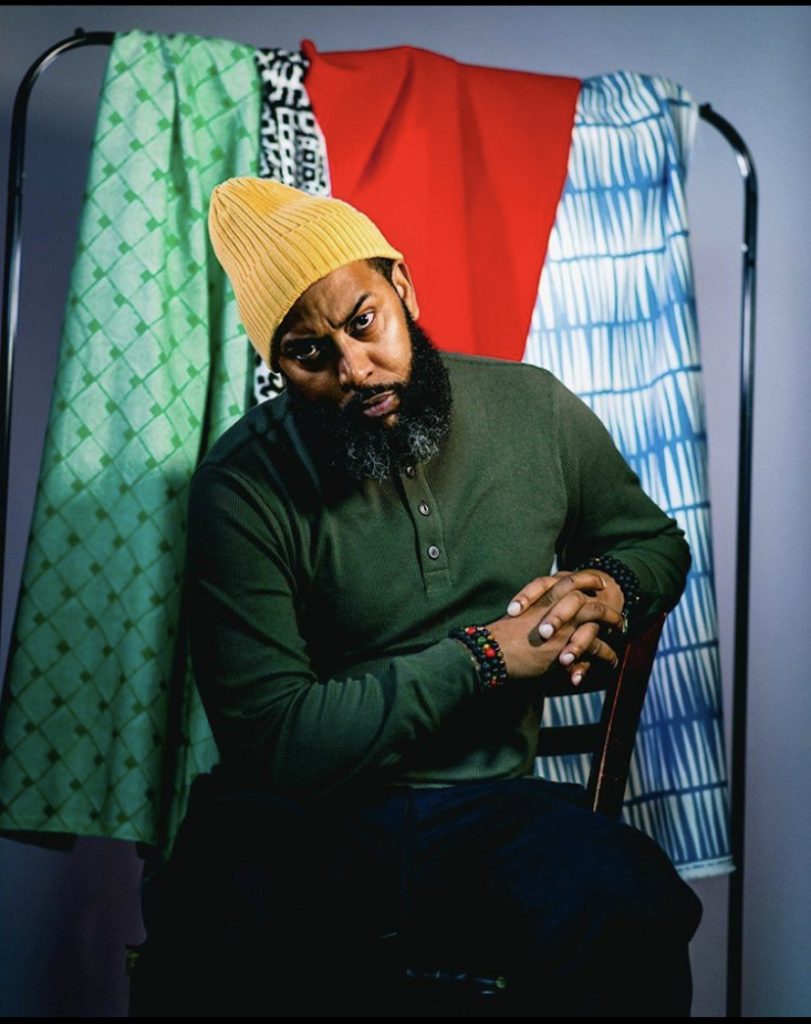 For a comic who got his start at the relatively late age of thirty-eight, Felonious Munk has made quite a splash in just over a decade on the national scene. Born Arif Bilal Shahid, the Ethiopian-American funnyman plays the “Blegghead” (Black Egghead) correspondent on Comedy Central’s “The Nightly Show with Larry Wilmore” and is a regular on the ABC drama series “For Life,” in addition to his acclaimed YouTube series “Stop It B.”

Possessing a thoughtful yet pointed sense of social commentary that has a decidedly outside-the-box spirit akin to Dave Chappelle, Munk is headlining Zanies on November 7. Speaking from his Oak Park home amid the maelstrom of controversy surrounding Chappelle’s Netflix special “The Closer,” Munk shares his unique take on life and comedy.

How did you come up with the stage name of Felonious Munk?

A kid I grew up with jokingly called me Felonious Munk one day and I made it my Twitter handle and it stuck for all things comedy. Pretty much everybody who’s known me since 2011 calls me some kind of variation of that, and it’s appropriate because of my very serious, monk-like approach to working on comedy. But it’s hilarious that there are some people who call me Felonious because they really think it’s my name—I just ask that you don’t call me that when cops are around!

You had a solid career going as a finance director for a new car dealership well into your thirties before you ever set foot on a stage. What made you decide to make the move at age thirty-eight?

It was a pretty good job, pretty lucrative, but it’s also kind of soul-sucking work. Yeah. And you know, it was kind of at a point in my life where the decision was, I’m already thirty-eight and I can do another ten years of this and retire, or I’ll do what I really wanted to do and I’ll do it while I still have some energy. A buddy of mine dared me to go up on an open mic. I did, and you know, every comic will tell you the first time they touched the microphone. They knew it was for them. Or, you know, it was the first show they ever did. They bombed, but they couldn’t stop doing it.

It wasn’t so much the microphone or the attention. It was literally trying to solve this Rubik’s Cube of, I have these ideas and I have this group of people, and I think I can say these things to them and make them react to me in this very specific way. Versus there’s no challenge in auto finance. It didn’t feel like I was doing anything and I didn’t want to die like that. I didn’t want to die feeling like the only thing I’ve done in my life was make money. So I became a comedian where we clearly don’t make money unless people come to our shows.

I’m a twenty-five-year comic myself, started in Chicago and then L.A., and now I’m in the South near Little Rock. I know what you mean about doing it even if you bomb the first time. I got one awesome laugh from one woman at my first open mic, and that kept me going through six weeks of silence.

I wonder what the axis is there, right? When you start out, it can be a roomful of silence and that one laugh will inspire you and push you to keep going. But then there comes a point in your career where the entire room could be laughing, and the one person who isn’t will haunt you. Just what am I not doing? How am I not connecting with this person? Like I literally said to a person, you’ve had your arms folded. What am I doing wrong? So there’s at some point where the balance kind of tips and you go from having just one laugh is enough to a roomful of laughter isn’t enough if everybody isn’t laughing. And I don’t know when that point happened for me, but I’m firmly right in that camp now where I’m just getting to the place where I go, you know what? If it makes me laugh, I’m fine.

Yeah, I’ve been there. In 1998 I was at Zanies and had the whole room going and I made one lame joke with gays as a punchline. It was something you could still get away with at the time, normally. But one table full of gay men heckled me the rest of my set, and I learned a lesson to never crack a joke like that again.

We’re in these times now where, you know, everyone’s talking about how comics can’t do this and can’t do that. And it’s funny. I don’t know. I guess, look, I’m a Black guy who has lived in the North, the South, you know, now I’m in the Midwest. I don’t know what it feels like to not know what boundaries are. And so I didn’t get into comedy with the expectation that I could say anything.

I hear from people that comics are the last line of defense of the First Amendment. And we can say anything. We’re the only ones who could say anything as long as it’s funny. I’ve never felt that way. And maybe it’s because I got into comedy late.

No, it’s that you have to talk about it from a perspective that says, I respect both sides of the argument. And I don’t think that’s what everyone’s doing right now.

In all the fuss about Dave Chappelle talking about trans people in “The Closer,” everyone overlooks that he calls women “bitches” constantly. I don’t get how that gets a free pass for any comic, much less him.

It’s a touchy subject. There’s always going to be a group that you’re not a part of. But here’s what I think is the most interesting. Almost exclusively male comedians are allowed to talk about women in any way possible. They can talk about their wives. “I hate my wife.” “Women are stupid.” And because women are half of the population, we pretend like they’re not a marginalized group, even though we know for a fact that they had to fight to get the right to work or fight to get the right to even have a bank account or without their husband’s name on the credit card. Right? Like, we know they had to fight for these things. But they’re not protected on stage. They’re absolutely not.

I think we have to find some type of consistency. I do believe that, you know, and [star comic] Katt Williams said recently that I don’t know why we’re all acting like this. There are boundaries on the highway so that we don’t just drive off. We’ve got speed limits. We’ve got shoulders on the road. We have all of these things to make us safe. And in every other situation, we go, Yeah, that makes sense. But for whatever reason, we think comedy should be the Wild West, and that doesn’t make sense.

I haven’t said anything publicly about Dave Chappelle. And that’s different for me because I usually have some type of public statement on just about everything, just because this is what I do for a living, too. But I haven’t because I think this is one of those instances where the discourse isn’t moving society along. All we’re doing is we’re promoting a special, one way or the other. We’re all promoting his specials. And I don’t know, you know what I mean? That’s fine. That’s cool. If you like the special, promote the special. But I think the people who don’t like it are doing as much harm to their own cause as they think they’re helping. Because people are now like, well, what did he say? Well, I need to watch it myself.

Munk was hired within a year of starting comedy by New York City TV station WPIX to provide social commentary on their 5pm newscasts. While there, he moved up quickly through the ranks of the city’s clubs, headlining the topnotch venue Gotham for the first time in 2012.

He moved to Chicago in 2013 when the Tribune Company hired him to work as a commentator for its TouchVision platform, which targeted millennials. Since arriving here, he also worked with Second City to create the show “Afrofuturism,” which evolved into “Black Side of the Moon” and went on to have a seven-week run in Washington, D.C.

You went to Ferguson, Missouri in 2014 amid the first Black Lives Matter protests surrounding the death by cop of Michael Brown. How did that affect your approach to political comedy and social commentary?

The shift for me came when I saw a lot of famous people show up there just looking for photo ops. You can show up at a place like that if you’re a comedian or an actor or artist, but it doesn’t make you a politician or an activist. It made me back up and realize, am I taking myself too seriously? I can make a comment on what’s in the news each day, but at the end of the day I should be making you laugh.

If in the process of that I can make a point and make you think about something, then that’s cool. But the comedian’s job is to always have a punchline.