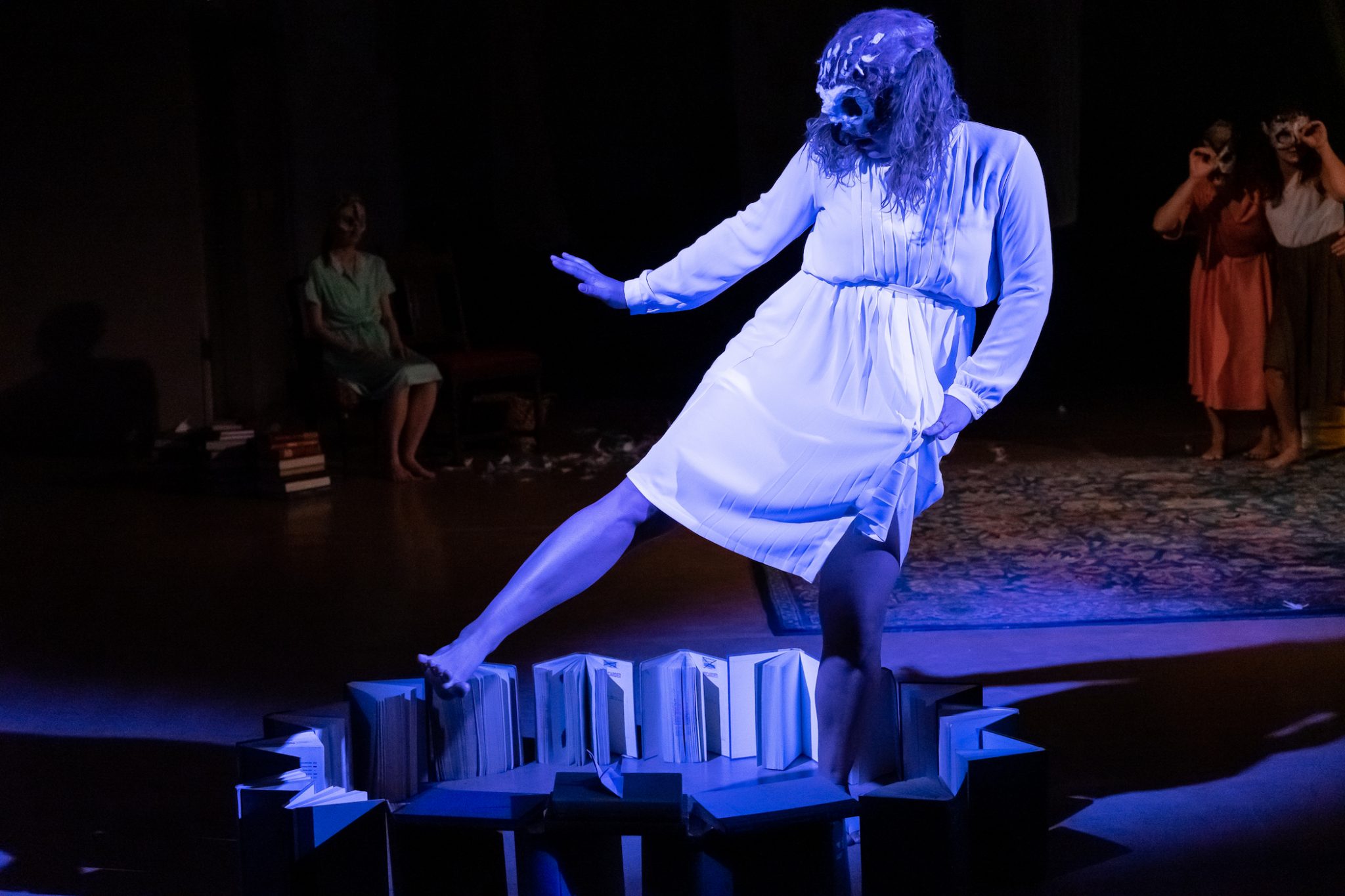 The last year-and-a-half has produced a glut of high-budget, high-octane entertainments for home screens: saturated palates and binge-inducing cliffhangers that make the viewer ever hungrier for the next hit. I’m not complaining; I loved “Squid Game” like I love strong coffee and dark chocolate, but one cannot live on caffeine and sugar alone. The split bill presented by Chicago Danztheatre Ensemble and RE|Dance Group, running through November 20 at the Auditorium at Ebenezer Lutheran Church, is a reminder of what’s been missing from our storytelling diets—subtler fare that can only be savored in the live theater.
Both companies restage forty-five-minute pieces created before the pandemic, and both have taken on new import in the age of shelter-in-place. RE|Dance opens the show with “The Attic Room,” a strangely dreamy journey of the imagination in which six dancers in feathered owl masks and simple clothes stack up and knock down little worlds made of hardcover books, paper cranes and their own bodies on a large Persian rug, which functions as both playground and cage. Fingers take a jaunty walk or curl to form spyglasses searching the horizon for distant shores. Lighting changes mark shifts of scene and mood, which range from giddiness to frustration, claustrophobia to expansive delight.

The piece, choreographed by Michael Estanich and co-directed with Lucy Riner, occupies the mind-state of children’s play—ideas come in a flash, games are invented and abandoned, little tussles break out and dissolve. There’s even a splashy musical number…which audience members will doubtless enjoy according to how much they like splashy musical numbers. But the scenes don’t follow a linear path or tie together in a tidy finale, and conflicting moods coexist—the attic room is a place of comfort and confinement, an exploration of how our homes and our minds can be prisons or limitless expanses, at times both.

Chicago Danztheatre Ensemble’s “The Yellow Wallpaper” is a straight-ahead narrative, based on a Victorian-era short story by Charlotte Perkins Gilman and adapted by Amanda Healy Collins and CDE founder Ellyzabeth Adler. A new mother is given the “rest cure” for postpartum depression by her husband, whose authority as a man and a doctor goes unquestioned even as the prescription of isolation and confinement only worsens the patient’s condition and ultimately leads to catastrophe. A chorus of three dancers, partially obscured by hanging banners of the wallpaper of the title, begin to emerge into the foreground as the protagonist’s mental health deteriorates and obsession with the wallpaper pattern grows—a potent trope of isolation-induced visual torment recurring in film and television, from Park Chan-wook’s “Oldboy” to the first season of “The Sinner.” Adler’s choreography grows increasingly athletic as the heroine sheds layers of restrictive Victorian clothing, quietly rebelling against her captor with the only tools at her disposal: her journal and her own body.

The two pieces complement each other nicely. I might have liked to see “The Attic Room” second, if only to end on an abstract and somewhat lighter note, but I left feeling gently sated in a way I haven’t experienced in nearly two years.