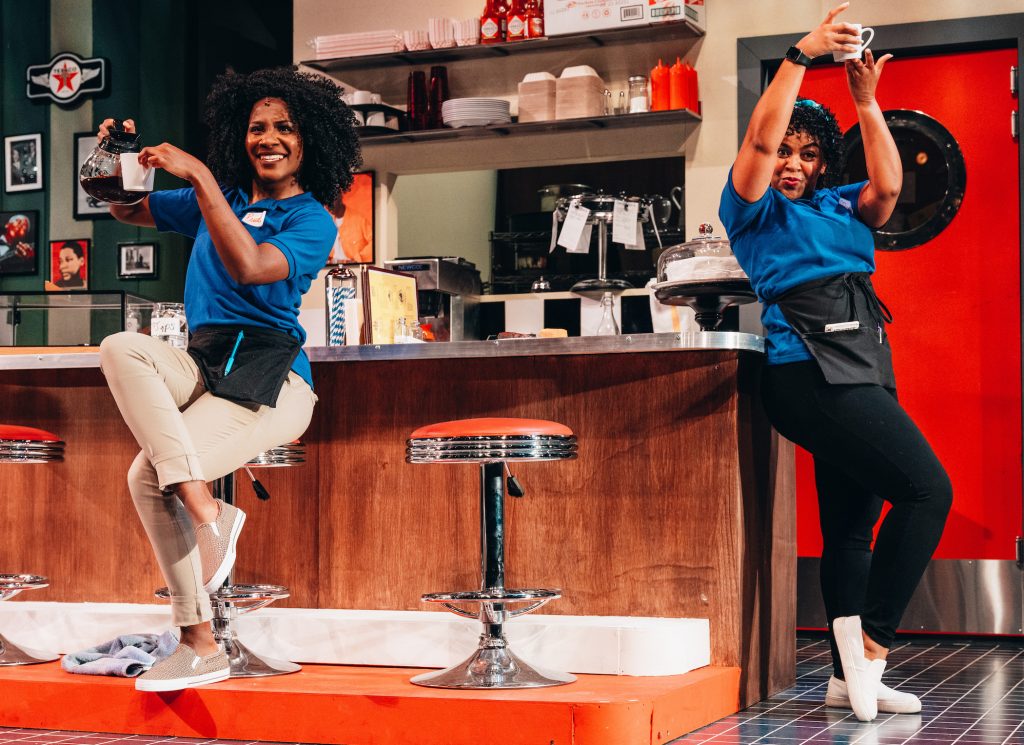 When it was created in 1981, “Pump Boys & Dinettes” was already a nostalgic show. Set in a diner and old-school garage, probably in North Carolina, the cheerful, energetic show combines songs that range across country and folk, from hard-driving anthems to gospel to Celtic hymns. Largely a collection of songs—many funny, some balladic—”PB&D” demands triple-threat cast members who can play their own instruments, sing and sell the feather-light sitcom script without mocking their sitcom types. In 2021, the show is a small miracle, surviving four decades and its corn-poney Southern-ish roots and emerging on the stage of Porchlight Music Theatre largely free of the pre-woke landmines rife in musical theater of “Pump Boys’” vintage. That’s due in large part to the skillful adaptation by Chicago director Daryl Brooks who imports a strong, rousing dose of soul into the show’s mix.

The production features the catchy songs that stirred the Broadway and the long-running Chicago productions in the eighties, but some of the show’s catchiest, sung by the waitress Cupp sisters, are now the most soulful, too. These days, soul and country may seem permanently wed. Beyoncé and Taylor Swift go platinum with the marriage. But long before “PB&D” debuted, country and soul were kissing cousins. There’s Ray Charles, Percy Sledge and Bobby Gentry, for starters. Brooks, whose previous credits include the Jeff Award-winning “You Can’t Fake the Funk” seems perfectly placed to keep the romance going here, and to remake the show and preserve the right measure of nostalgia.

When it works, it’s brilliant. Melanie Loren and Shantel Cribbs slip easily between their roles as lovably bossy country-diner waitresses and Dream Girls. The stage sisters sing the heck out of the material, and it’s their songs that may most stick in the ear afterward. The pair alone make the show worth seeing. The rest of the ensemble is strong, too, although nailing all three of the necessary threats often eludes them. It’s a high bar and two out of three ain’t bad. Longtime “Pump Boys” fans may miss the high-octane virtuosic instrumental musicianship of previous productions, and the musical hijinks that virtuosity made possible. But we do get the sweet, if slightly under-miked vocals of Billy Rude playing the sly slacker mechanic Jackson and the oddly compelling presence of Rafe Bradford as Eddie the all-but-mute but very boss bass player. As for mixing the soul with the tried and true material, it makes for a good show, though sometimes the integration could have gone even further. So much of the show still steers clear of the more soulful realizations that it seemed the new interpretation still has some wedding to do. But it’s still early days for Chicago theaters at work on diversifying their companies and productions, and this is a stellar effort to learn from, clap to, and, for days after, to hum to.

“Pump Boys & Dinettes” at Porchlight Music Theatre at the Ruth Page Center for the Arts, 1016 North Dearborn. Through December 12.