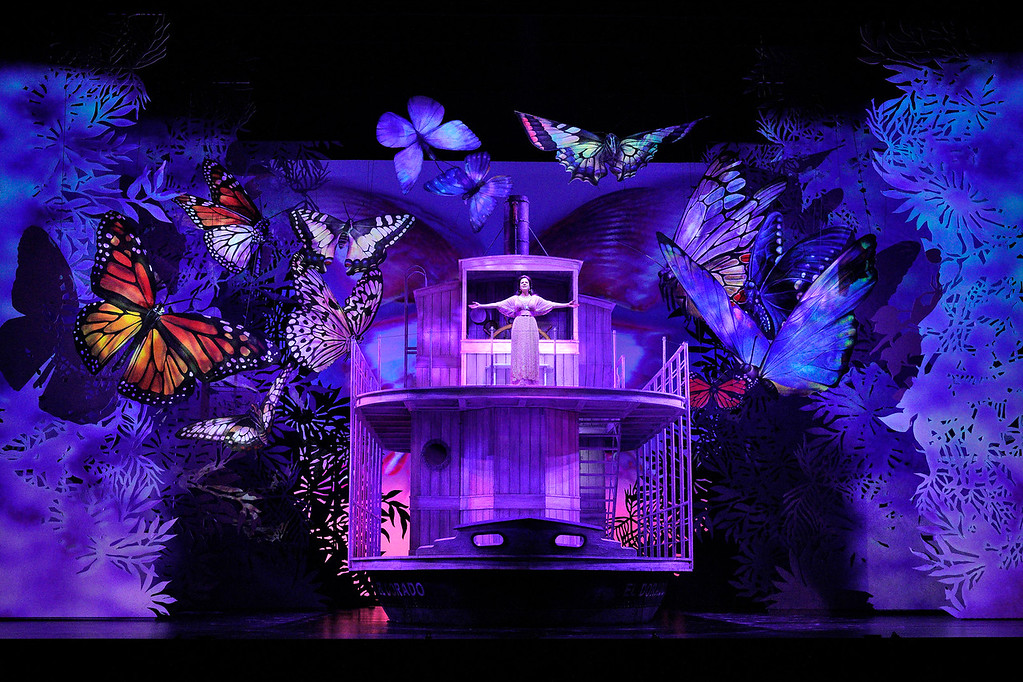 With the programming of “Florencia en el Amazonas,” the first Spanish-language opera on the main stage at Lyric, the company continues its climb toward greater inclusivity in programming and casting with Daniel Catán and Marcela Fuentes-Berain’s opera, the first with a Spanish libretto to be commissioned by an opera company in this country. Set aboard a ship braving the Amazon River en route to a famous opera diva’s hometown and the opera house where she is to give a triumphant return performance, composer Catán’s lush score sets just the right tone for Fuentes-Berain’s libretto, a magical, spiritual journey toward the deepest sense of home. Soprano Florencia Grimaldi hopes to attract the attention of her lover of long ago, a butterfly catcher who has disappeared into the jungle. The romance of the story and the music feels like a step into the cinema, and the influence of composer Korngold, certainly a master at composing for film, can be strongly felt in this score, along with a dash of Puccini and additional composing compatriots. If Grimaldi’s central purpose in the story’s arc is to comment upon unrequited love,  then the middle-aged couple Paula and Alvaro could be said to represent love shifting. To round out the exploration we have a pair of young lovers, Rosalba and Arcadio, who can represent fledgling love, and one Riolobo, the factotum of the ship and the story’s narrator and sorcerer, leading us into the story in multiple guises and creating miracles both large and small.

Ana María Martínez returns to Lyric for her eleventh role as the despondent diva, and she is in her element. The music sits well in her voice, and her characterization is heartbreaking, a beloved public figure hiding behind walls of her own construction. Her first-act aria and final scene are musical and dramatic high points in the evening. Gabriella Reyes makes a strong impression as Rosalba, the young journalist who is hoping to interview the incognito diva to whom she has been speaking during the journey. As Riolobo, baritone Ethan Vincent is convincing as a ship’s mate who is clearly more than he presents, his pockets full of magic. From the Ryan Opera Center, the cast boasts Mario Rojas as the young lover and Levi Hernandez as the middle-aged husband, and both acquitted themselves well. Rojas is a real find, and is turning in one fine portrait after another at Lyric; he is certainly one to watch.

Choreographer Eric Sean Fogel’s seven dancers fill the river with spirits and sprites, highlighting and commenting upon the trials of love aboard ship. Their contribution cannot be too highly praised, for they physicalize the ethos and bring it to an almost imaginable reality. Director Francesca Zambello’s original production, with some new polish added by the original design crew for this very short Chicago run of the opera, wears well, from storms to cholera.

Not enough can be said about the importance of this piece finding its way to the Lyric Opera stage. Particularly given the need to climb out of the business morass that was the almost universal gift of the pandemic, it would not have been surprising for Lyric to have taken fewer risks with their return season, putting off new and unfamiliar productions in favor of the tried-and-true warhorses. Much to their credit, Lyric has done no such thing, and this beautiful piece is now on the boards, inviting us to fall in love once again. (Aaron Hunt)