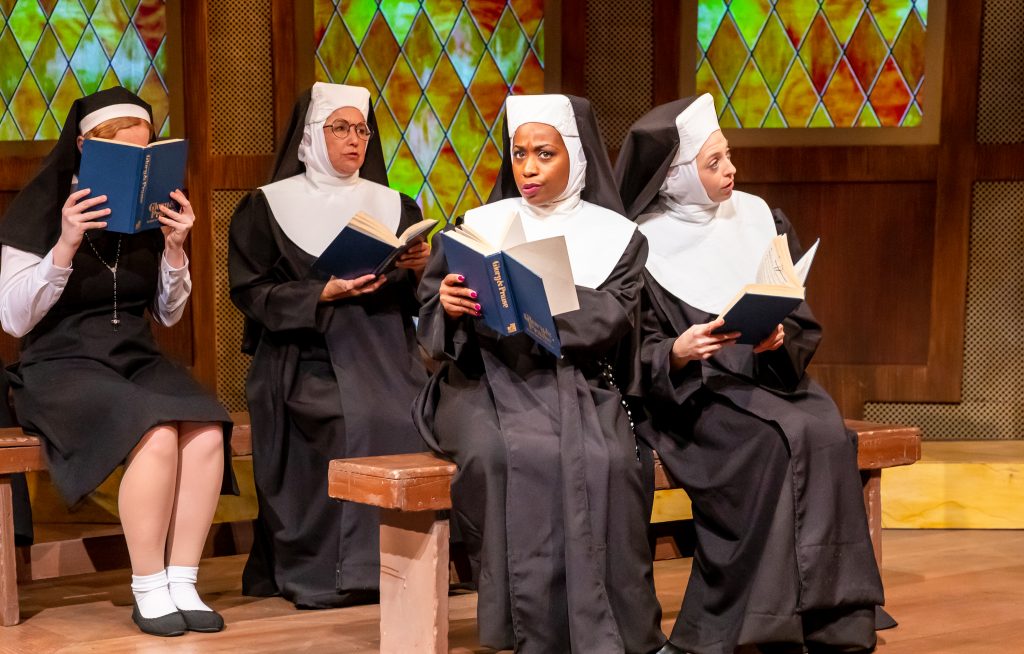 The adage that some pieces of entertainment require you to “turn your brain off” to enjoy them is something I inherently disagree with (Brains are good! Art—even “frivolous art”—is always worth being analyzed by a full cranium), but a strong argument for this phrase is being made at the Mercury Theater on Southport with their latest production “Sister Act.” Based on the massively successful 1992 comedy movie starring Whoopi Goldberg, the musical adaptation is a cheesy, subpar piece of musical comedy fluff. It’s also likely to be the most fun you’ll have in a Chicago theater this season.

A prime comedic premise—a would-be lounge singer disguises herself as a nun until she can give testimony to take down her murderous boyfriend—the original “Sister Act” is a fun-enough piece of goofy cinema, centered around Whoopi’s dynamic performance and buoyed by a delightful screenplay and on-screen antics. In our current age of nostalgic artistic regurgitation, with the majority of blockbuster films and Broadway musicals being based on popular IP that leaves us all incurious, coddled and placated, it was only a matter of time until this film was musicalized, especially with such ripe material (Singing nuns! A classic “interloper in a new environment” premise! A title you recognize!).

On the page, “Sister Act” is something of a dud; the book by Bill and Cheri Steinkellner, with additional material by Douglas Carter Beane, has a few genuine comedic bright spots shining throughout a heap of cliché-ridden lines and drastic tonal shifts between the goofiness of Act One and a dramatic dip of Act Two that comes with the territory of Broadway musical earnestness. Meanwhile, the songs—music by Alan Menken and lyrics by Glenn Slater—range from catchy earworms to forgettable ditties that make you question how this is the same composer behind your favorite Disney Renaissance classics.

But against all odds—call it divine intervention, if you’d prefer—the company of the Mercury Theater’s production, under the wonderful direction of Reneisha Jenkins, have created a musical comedy experience that had the audience laughing and applauding in equal measure throughout its entirety. The whole cast makes the most of their ridiculous songs and scenes, leaning into the complete unseriousness of it all; they know it’s a joke, and they know we know too, and that acknowledgement of absurdity keys us into an assured, joyful time at the theater.

And let it be known, this is undeniably Alexis J. Roston’s show, taking on the role of our protagonist Deloris, displaying not only marvelous vocal chops, but a genuine sense of brilliant comedic timing, hitting practically every one of her lines out of the park. Alongside other standout performances from Leah Morrow, Gilbert Domally, Denzel Tsopnang, and Isabella Andrews—not to mention super-playful costume design from Marquecia Jordan—the evidence is clear; you won’t find a more joyful, delightful piece of musical comedy entertainment on a Chicago stage right now, brains be damned. (Ben Kaye)