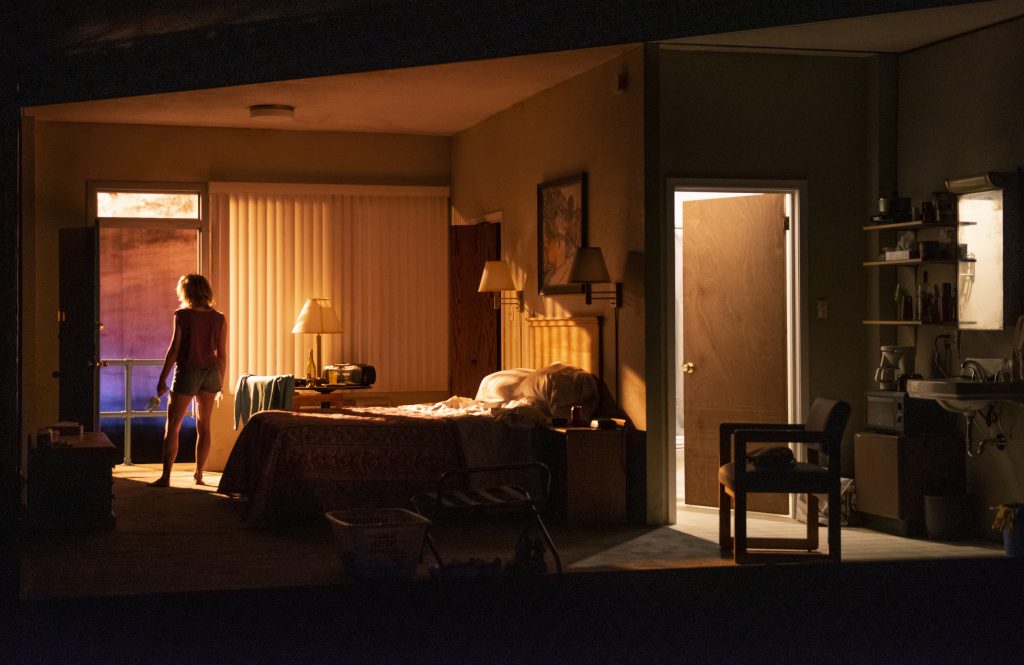 “Bug” is the show that will make your skin crawl.

It is a reminder of all the things to love about live theater. You can feel your row-mates’ cringes, sighs and bouts of inappropriately timed laughter. We haven’t had to be so uncomfortable with one another in so long that this experience feels foreign. The audience is the fly on the wall of a dingy Oklahoma hotel room where Agnes White (Carrie Coon) is taking refuge from her recently released, abusive ex-husband Jerry (Steve Key). The collective flies on the wall observe Agnes become friends with a drifter named Peter (Namir Smallwood) who believes there are bugs living under his skin. Were the bugs planted by the government? A hallucination from cocaine use? A symptom of underlying mental illness? Were we the bugs all along?

This play by Tracy Letts, originally produced in 1996, is its own brand of contagion. Amanda circa 2020 would have been enraptured in this twisty maze of human psyche, but COVID-19 survivor Amanda had the opposite gut reaction. “Bug” doesn’t feel like a comedy of any kind; it feels like an exposé on the fragility of the human condition. The all-consuming nature of conspiracy or paranoia, known all too well by some people in my life, elicits a familiar sadness fueled by the failings of our very real, offstage world.

Coon and Smallwood have the stage dichotomy director David Cromer must have dreamed about. Their raw vulnerability, emphasized through nudity at times, will rip your heart out. Whether the bugs are real or not is immaterial; these actors are too mesmerizing for it to matter. Combined with Jennifer Engstrom’s gritty portrayal of Agnes’ friend R.C., the performances will thrill you.

After being stuck inside our own four walls for so long, you might understand Agnes and Peter’s makeshift bug bunker more intimately. You could feel your heart quicken when someone knocks at the door, eager to know if they can remedy your all-too-real escape room scenario. The iterations of scenic designer Takeshi Kata’s grimy hotel room feel like home until they start to seem foreign, too.

Belly laughs filling the house in the wake of someone’s mental breakdown repeatedly broke the tension. Not having seen this show before living through a global pandemic, categorizing “Bug” as anything other than a thriller boggles the mind. Even by the basic definition of comedy, this isn’t a comedy, dark, black or otherwise. For the first time in my life the audience really did ruin a show’s atmosphere. But we all handle discomfort differently. And this show is certainly uncomfortable.

Maybe we just weren’t ready for the bugs.