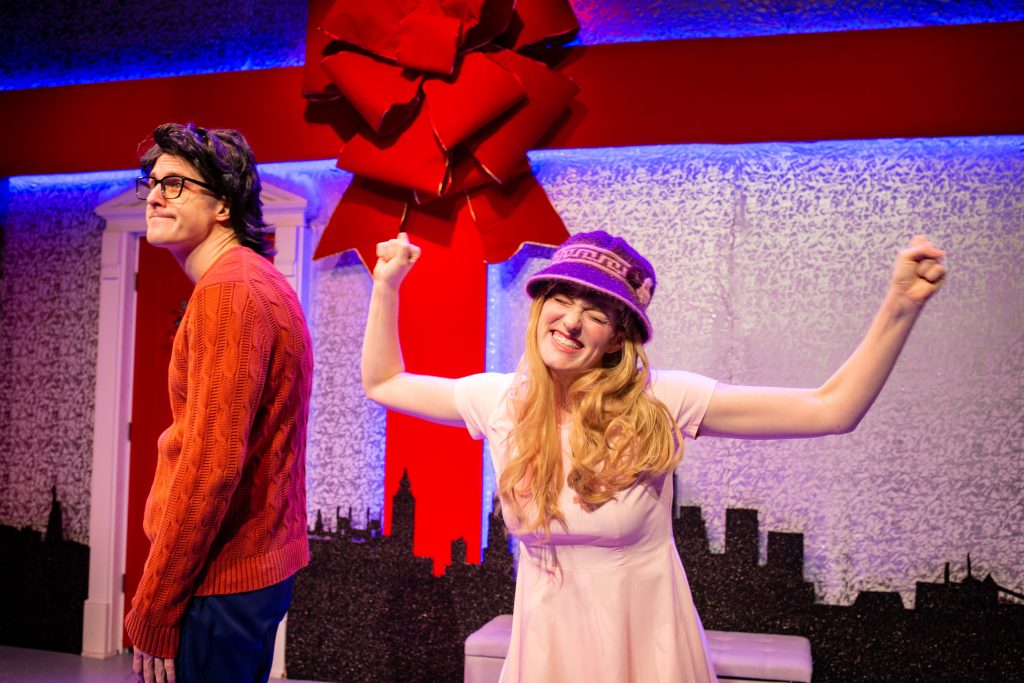 “Love Actually? The Unauthorized Musical Parody” shoots at the king of rom-com Christmas films and kills it. And we get to die of laughter.

I’ve seen “Love Actually,” the movie, a few times. First in the theater when it was released in 2003. Thereafter, when I was roped in by family members, sitting in PJs on a living room couch, with the film already queued. The film never made much sense to me and none of its characters seemed much worth caring for. I’ve learned that the world is pretty divided on the film’s merits.

There’s no denying that it is chock-full of of characters. You know: Characters, the kinds that populate British rom-coms featuring Hugh Grant and for which I am usually a willing sop. The magic in “Love Actually,” if there’s any, is the way the sturdy, nearly always reliable rom-com story structure keeps its multiple, albeit slim, plots all in the air and is just interesting enough.

The parody tops that act, by a mile. Six actors—most of them Chicago stage vets—play more than fifty roles, make 144 costume changes and swap wigs forty-two times. And boy do they commit. They sing well, dance very silly, convincingly impersonate the famous actors of the original cast, master English accents and cuss words like “bollocks,” deliver pratfalls and rude wiggles galore and move the witty, manic action with cuckoo-clock precision. Dare I say that if you like the movie “Love Actually,” you may like the parody more.

The loudest laughter in the audience came during instantly recognizable moments. If you dislike the movie, or haven’t seen it yet, see the parody anyway. You still know more than enough, actually. The Christmas classic parody is coming to be my favorite holiday theater genre. It’s taking root, too. Second City has relaunched its clever sendup of cable sappiness in “Deck the Hallmark.” Sure, Scrooge, the folks of Bedford Falls and airborne reindeer can yank our Christmas chains, but nothing says “Ho Ho Ho” like a good skewering of holiday ho-ho-hokum.