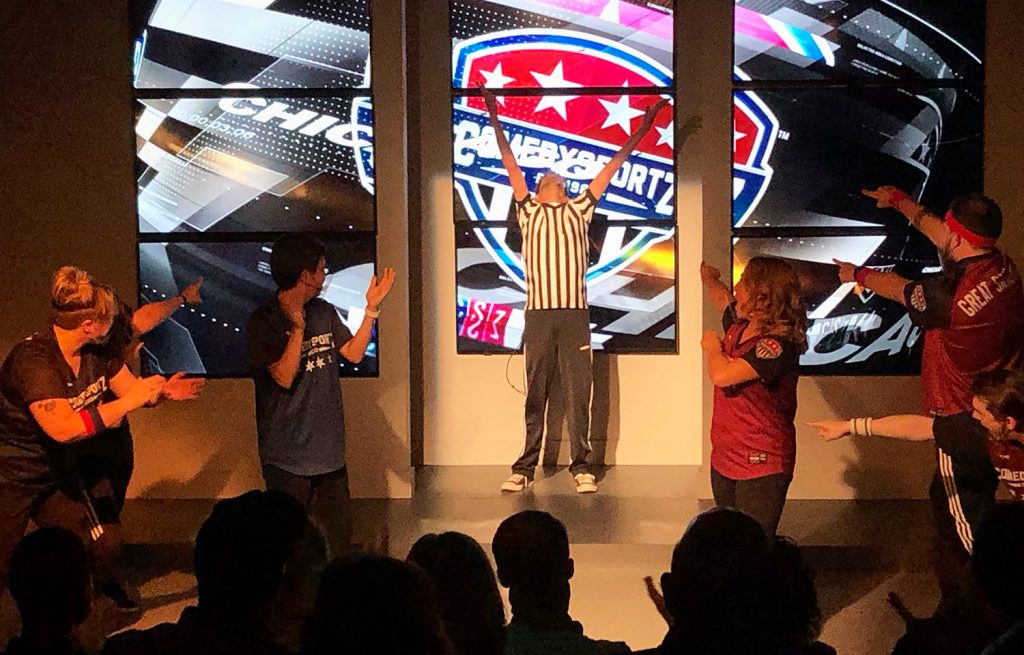 The lockdowns of 2020 created a massive challenge for live stage companies of all stripes to survive. But for the long-running improv comedy mainstay ComedySportz Chicago, the shutdown created the impetus for a change in locations that also sparked a major creative reinvention of the way they produce their shows.

Moving to the Den Theatre in the Wicker Park/Bucktown neighborhood from a two-decade berth near the Belmont Red Line station, CSz (as they abbreviate themselves) reopened October 1 with a bold new stage design that artistic director Jason Geis says “has blown people’s minds, wondering ‘What the hell is going on here?’” That new approach has brought an impressive visual element to the troupe’s longstanding format of having two improv teams compete in a series of games overseen by a referee.

“The old set we used looked like a locker room, but now we’ve incorporated a lot of visual aspects. We stayed afloat during the pandemic through Twitch shows that opened our digital abilities,” explains Geis, who’s overseen the company since 2019. “The stage now has thirteen fifty-five-inch TV monitors that change throughout the show to bring you different backgrounds and video clips for every game. It’s still the same format, but just adds a new, funky, weird kind of experience and people are loving it.”

ComedySportz was created in Milwaukee in the mid-1980s and has been a presence in Chicago since 1987. For the uninitiated, Geis describes it as being akin to the long-running TV shows “Whose Line is it Anyway?” and Nick Cannon’s “Wild ’N Out.” CSz has a blue team and a red team play a series of five-minute games built off audience suggestions, with a host introducing each game and a referee calling fouls when rules are broken, and the audience voting for which team they believe won each round.

There are singing games, games built around puns and ones that feature physical comedy, all part of “a whole bag of tricks that can even be customized for special-event shows.” Each ninety-minute show climaxes with an epic battle called “Six Things,” which Geis terms “the hardest guessing game you could ever imagine. Audiences just can’t believe how the players pull it off.”

“The shows are so competitive and physical that they’re as close to sports as you can get with improv,” says Geis.

Despite the red and blue team colors, ComedySportz has built a reputation as being for all ages and ideologies by keeping its comedy clean and free of politics. Acknowledging that avoiding the divisiveness of taking political sides is often more challenging than simply going for easy cheers based on ideology, he explains that the upside to the CSz approach is that it keeps players on their toes.

“Swearing or being vulgar or political is often just an easy joke, and you risk polarizing half your audience one way or another. Working clean means you pursue actual jokes, the comedy of the innuendo or embrace the physical comedy more,” says Geis. “Doing it so long now makes it all come naturally to me and I appreciate this side of it more. We pride ourselves on being a show for everyone, that can be enjoyed whether you’re seven or seventy. You can just have fun with whoever you want to bring.”