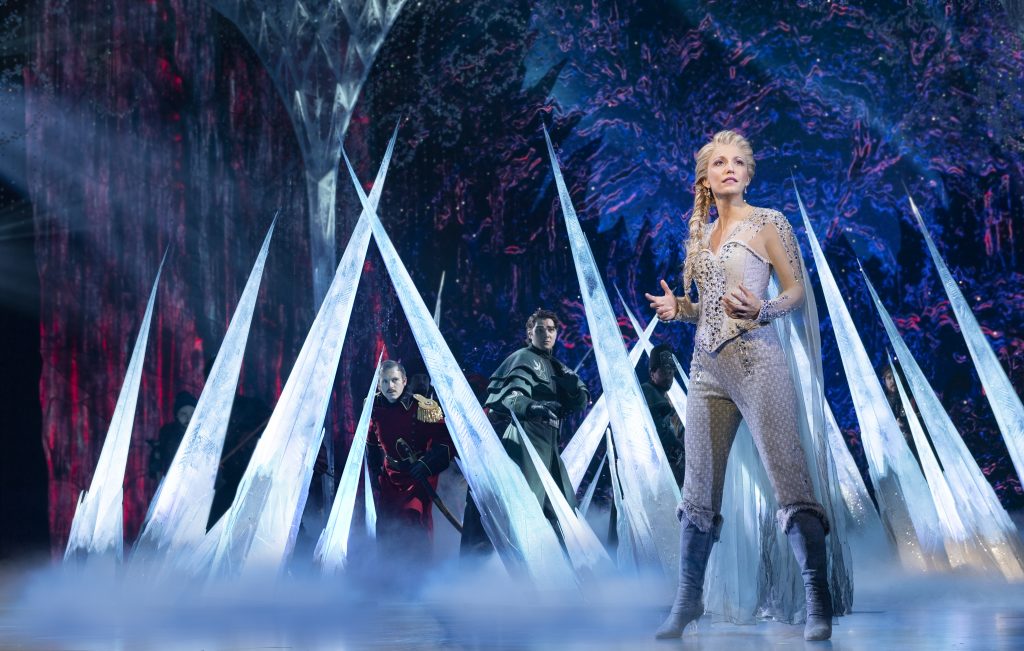 It was a sparkling scene at a Tuesday evening performance of “Frozen” at the Cadillac Theatre. The excitement before the show was one of the best parts of a great night of what—with the musical’s focus on the bonds between sisters—is literally family entertainment. Parents and grandparents, the girls, many under ten, turned out in legion. One grandma in front of me in line fanned out eighteen orchestra tickets for her minion of children and grandchildren. All of them, it seemed, were dressed for what may have been their first big nights out in the city. Some carried dolls, others wore tight braids in the style of the show’s powerful queen. I asked the grandma if she found a restaurant with a table big enough for all of them and she shuddered. “The last time I took everyone out, the dinner cost me more than $1,000. And these tickets were already quite an investment.” But she smiled when noting how happy the children were.

This show gets people out, and the grannies are right, it’s worth it. The original 2003 movie musical remains a powerful touchstone for a zillion people, and certainly the many young girls who come regally dressed to honor their heroines, the stage sisters. Boys were largely absent. It’s a shame. The pageant would have been even better had some lads shown up dressed as a snow-of-the-Earth ice peddler, stout reindeer or adorably buck-toothed snowman, the show’s main bows to the Y-chromosome. The powers here are girls and women. When it comes to showing heart, especially in the power ballads and anthems, sung boldly and beautifully to the upper balcony by the two lead stars playing the forcibly separated sisters, this show is stirring. Unless, that is, you’re one of the young audience members open to unadulterated joy. Judging from their gasps and wild applause, the show does not just stir, it’s a hurricane of wonder. The icy Elsa, played by Caroline Bowman, is a role played mostly in song, and her rendition of “Let it Go” is more than aptly named. In the role of the witty, redoubtable younger sister Anna, Caroline Innerbichler is one of the more rounded characters—both funny and moving—to appear in a big production musical in recent years. The depth of modern Disney characters in animated films often surprises. In this live action version, the characterizations go still deeper.

Aside from the humans on stage, Disney’s stage version of “Frozen,” which adds songs and scenes not in the film, is also a testament to what a crackerjack production crew can do with scenery and sound design. There’s lots of both. The ever-changing scenery is theme-ride-worthy and there is one killer instantaneous costume change that elicits thrill-ride shrieks, too. Unlike nearly every other big Broadway-style musical production I’ve seen, the sound design is so seamless and natural sounding that there are really no reminders on how hard it is to mic a few dozen actors or to get stage sound effects not to sound misplaced.

There’s another bit of stage magic at work, too. Animated films don’t tend to stray into the sort of multicultural and cross-cultural casting possible on stage. For all their imaginative power, audiences probably expect characters to be drawn very close to the standard images of the types they play. But good actors on stage can fill just about any role, and the diversity of the cast in the stage version of “Frozen” attests to it. Bravo for all that. Get your grandma to buy you tickets, but, please, at least offer to pay for your own dinner.

Disney’s Frozen at the Cadillac Palace Theatre, broadwayinchicago.com. Through January 22.