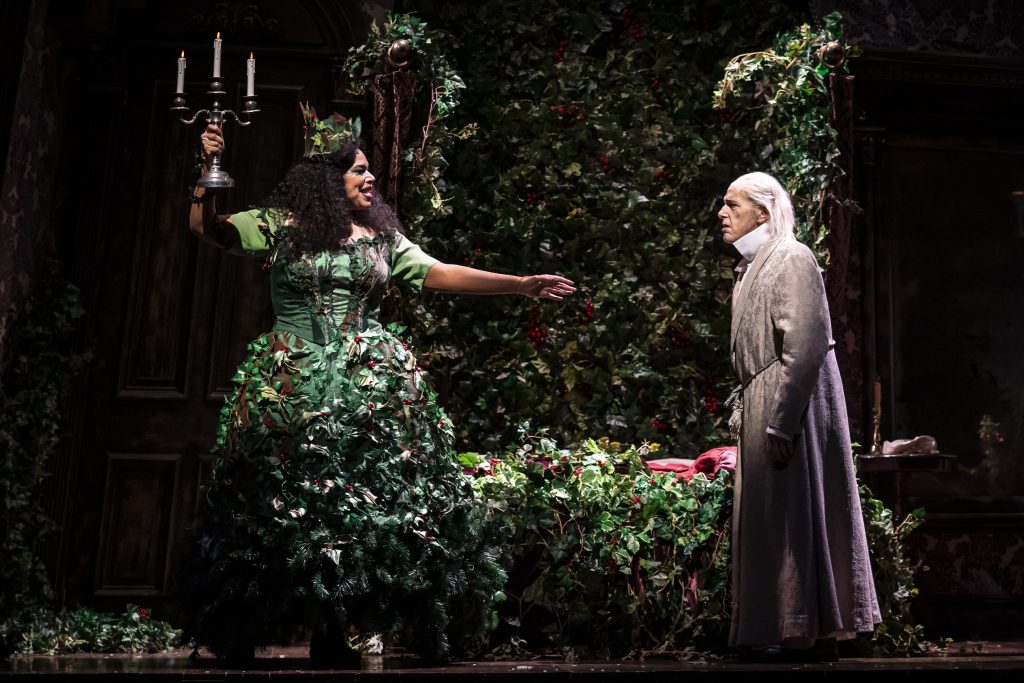 “A Christmas Carol,” with Bethany Thomas as the Ghost of Christmas Present and Larry Yando as Ebenezer Scrooge/Photo: Liz Lauren

Like everything else last year, Goodman Theatre’s “A Christmas Carol” was closed for Christmas. For the first time in over forty years, stalwart Scrooge and the Ghosts would be on holiday from the holiday. This prospect was unnerving enough that Goodman offered the unique Christmas gift of a radio-like, audio-only version of their beloved holiday tradition streamed at will by holiday shut-ins. Its physical absence, yet audio-only presence, was a reminder of how easily “A Christmas Carol” can be taken for granted.

It reflects a time when life was harder and more fragile and telling ghost stories was a Christmas staple as ghosts were seemingly everywhere. After nearly two lost years of pandemic and loss, can ghosts really scare us? As for our ancestors, ghosts are harbingers of comfort and joy even if Scrooge doesn’t initially see it that way.

It is telling that when Larry Yando’s Scrooge is solicited to provide for the poor at this season of the year because want is more keenly felt and abundance rejoices, he is offended at the very prospect of “making idle people merry.” Likewise, his niece Frida (rather than nephew Fred in this version), played by Dee Dee Batteast, who invites Scrooge over every Christmas is equally annoying to him as she can’t afford revelry, nor can his clerk Bob Cratchit (Thomas J. Cox) who wants the entire day off to celebrate. Their sin, as Scrooge sees it, is being merry without means. Not that as Scrooge demonstrates,  having means means merriment. It’s a powerful paradox and a reversal of riches that after a Christmas when the prospect of getting together was not a safe option, it took on resounding and refreshing affirmation.

There are fascinating and effective carryovers from Goodman’s 2020 audio-only version. Jessica Thebus, who directed that adaptation, directs this fully-staged production as well and has kept the narrator, who cavorts with the instrumentalists and carolers. It is a lovely touch that was enhanced by the narrator (Andrew White) directly interacting with the audience as almost a Yuletide jester. (“How dead was Marley?” “Dead as a doornail!”)

Physically reflecting Dickens’ own description of the transformation of Scrooge’s bedroom into greenery, the Act II opening spotlights a stunning array of green leaves as the memorable backdrop for Scrooge’s encounter with the Ghost of Christmas Past (Bethany Thomas). That Ghost is portrayed with Green Man-like imagery associated with the Winter Solstice although here a Green Woman who serenades Scrooge and effectively has more of an edge than the usually jovial versions of this character.

Perhaps because for many of us, our own ongoing journey has been no less transformative during such chaotic times, we watch Scrooge go through his familiar redemptive and restorative ritual with renewed interest and with pangs of uncertainty about how it all might come out. Which ends up making this perhaps the most powerful and needed “A Christmas Carol” of our lifetimes.