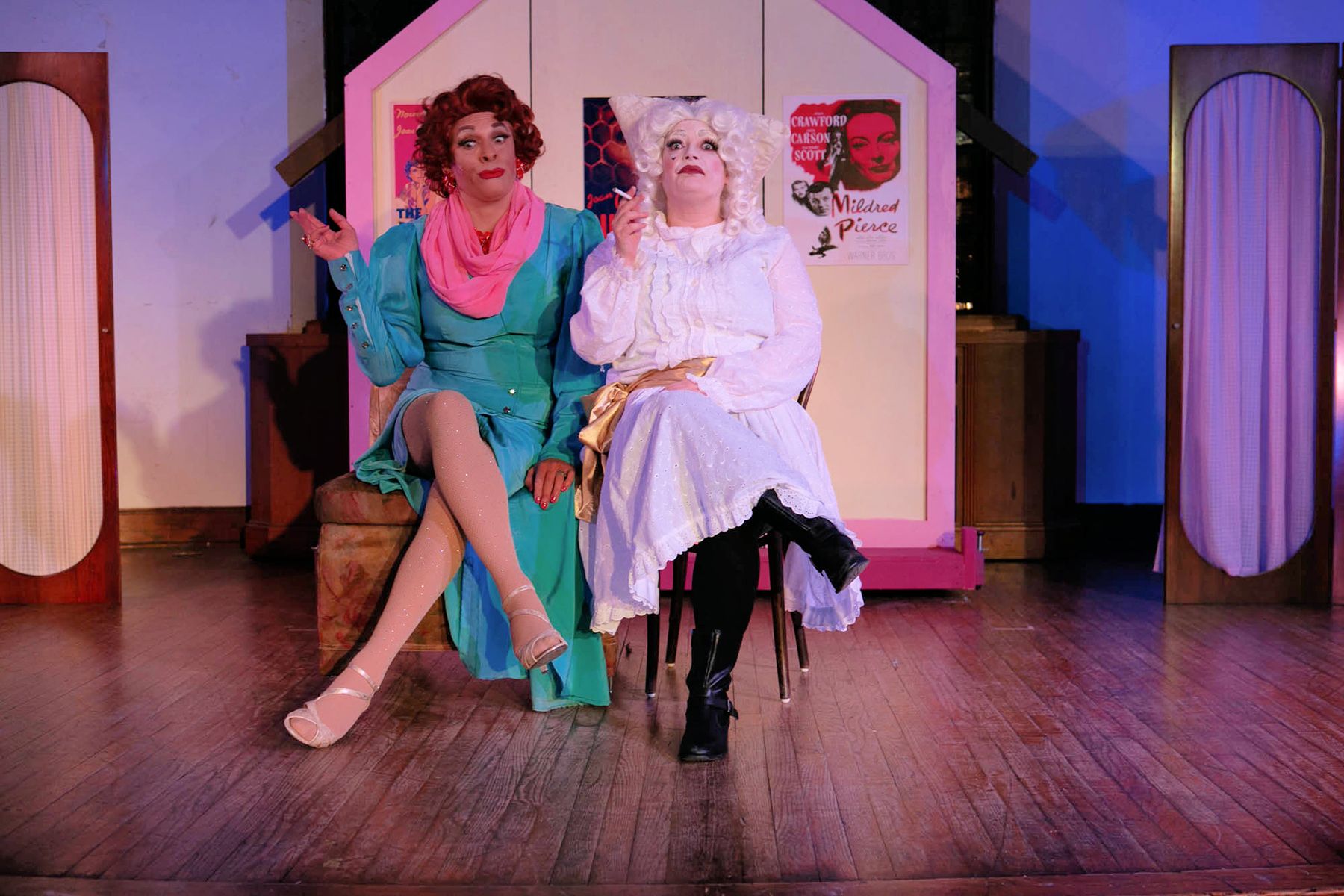 If you’ve been needing a little Christmas, and you’ve gotten to the point where you need it this very minute, you’re in luck, because Hell In A Handbag just happens to have an entire creche of it somehow shoved into David Cerda’s clutch purse and they’re not afraid to whip it out.

Hell In A Handbag Productions clomps daintily back onto the stage to open its twentieth-anniversary season with one of its audience’s favorite holiday musicals, “Christmas Dearest,” and that audience—the folks who sat in their cars to watch videos of the company’s previous productions flashing on a drive-in movie screen during some of the darkest days of this unending plague to worship congregationally at camp church—are rejoicing with great joy! (Yes, that is a legitimate lyric in a published, regularly performed Christmas anthem. I can’t make this stuff up!)

Co-founder and artistic director Cerda virtually IS the company. He authors most of the scripts and usually plays the leading lady, frequently channeling Joan Crawford. Cerda embodies the many-faceted diva in touches gigantic and, if not subtle, at least not quite so gigantic. His delivery of the one-liners that are part and parcel of this genre of entertainment is unparalleled, and the ease with which he slips from a focus that is in complete connection with a scene partner to a moment that lets the entire audience feel that they’re on stage as well and maybe just a little bit Joan themselves, is the stuff of an artist in complete control of their instrument and, therefore, the room.

This Joan saga has her in the throes of filming the story of Mary The Mother Of God, with Joan as, you guessed it, the world’s most improbable, virgin mother. (With singing!) Behind schedule and over budget as these things always are, Joan is at her scene-chomping best, and no one is safe from her hilarious, acidic wrath. But Joan tempts the fates one step too far when she announces that the cast and crew will be working on Christmas Day. This spiritual faux pas wheels the story right into Dickensland, and some spirits show up that… Well, I’m not about to spoil these surprises!

Ed Jones is fantastic as the lovable assistant Carol Ann, and Caitlin Jackson’s Bette Davis is a creature you will simply need to have lunch with—over Zoom. Mark Barty will knock your ugly holiday socks off with their Christina, and Nicky Mendelsohn (Teeny Teena) is a legend waiting to happen, and that bus is already on the way. Kate Setzer Kamphausen’s costumes are fabulous, and there isn’t a bad wig on a single head, kudos to wig designer Keith Ryan. (You can miss a line or futz a dance step, but a bad wig in a show like this is unforgivable!)

But here’s the bottom line, boys and girls, and this is the reason that Hell In A Handbag is a smashing success, and continues when so many other small, storefront companies are struggling mightily or folding altogether: they know who they are, and they understand the style intrinsic to their material. Because “camp” isn’t about imitations, and camp isn’t about mocking a time or any group. Oh, if you’re doing Bette Davis you better be able to wave that cigarette, there is more than a modicum of that element in this work. But every celebrity character must be drawn as an ode to that star, each remembrance as a shared moment in time, and every major plot point as a human situation of import. Camp isn’t a roast; camp is unbridled affection for the subjects who are invited into the room.

There’s a lot of love in Cerda’s clutch purse. Go see him in that elegant, exactly-the-right-blue dress, laugh until your belly is sore, and walk out the door with a glow in your breast. (Aaron Hunt)

Hell In A Handbag Productions in the Auditorium at Ebenezer Lutheran Church, 1650 West Foster, christmasdearest.eventbrite.com, $32-$35. Through December 31.