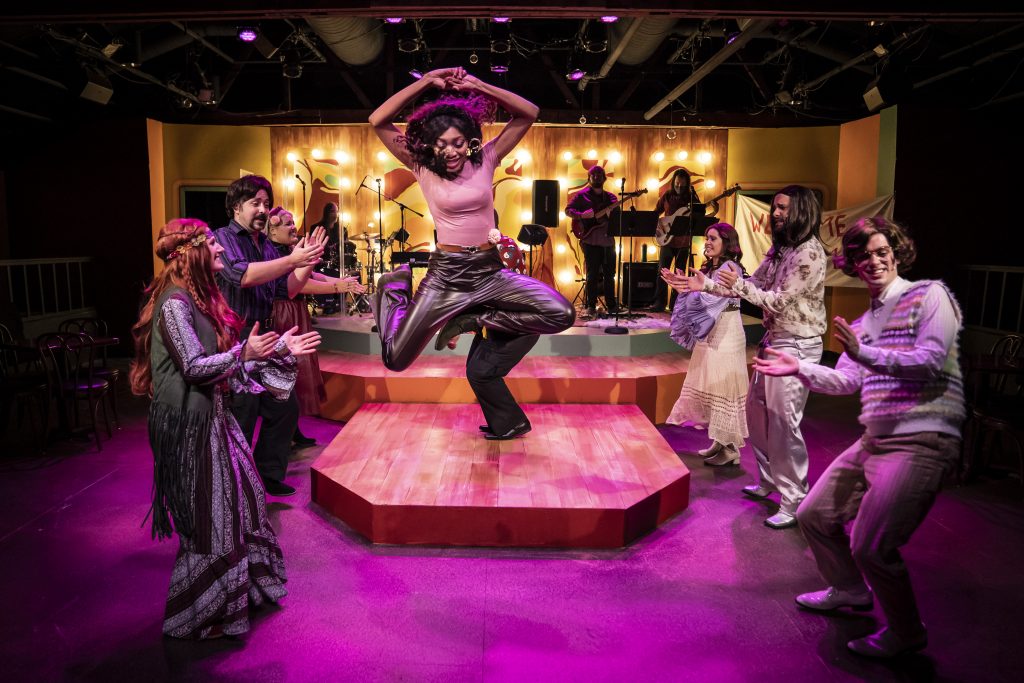 “8-Track: The Sounds of the ’70s” is exactly what it sounds like, a fun, light musical revue directed and choreographed by Jamal Howard that plumbs the breadth of a transformative decade in music. If you love, or merely like, the songs of that era (unless seventies for you signifies the birth of punk rock and hip-hop), you’re in for a treat with a show that is like one of those old Christmas TV specials with musical numbers only slightly less worn than holiday songs. Over the course of two hours, a cast of four leads with four backup singer-dancers, wearing wigs and a semblance of period-appropriate fashion, coasts through a vast songbook, fifty songs in whole or part. I was especially taken with the voices of the more-seasoned Wesly Anthony Clergé and recent Northwestern grad Mia Nevarez—notably her soulful rendition of the Aretha Franklin hit “Until You Come Back to Me (That’s What I’m Going To Do)“—but Jasmine Lacy Young and Patrick O’Keefe are strong as well. While the songs are loosely organized thematically, and there is unspoken romantic drama played with between and during numbers, the show is sung-through and largely devoid of narrative. 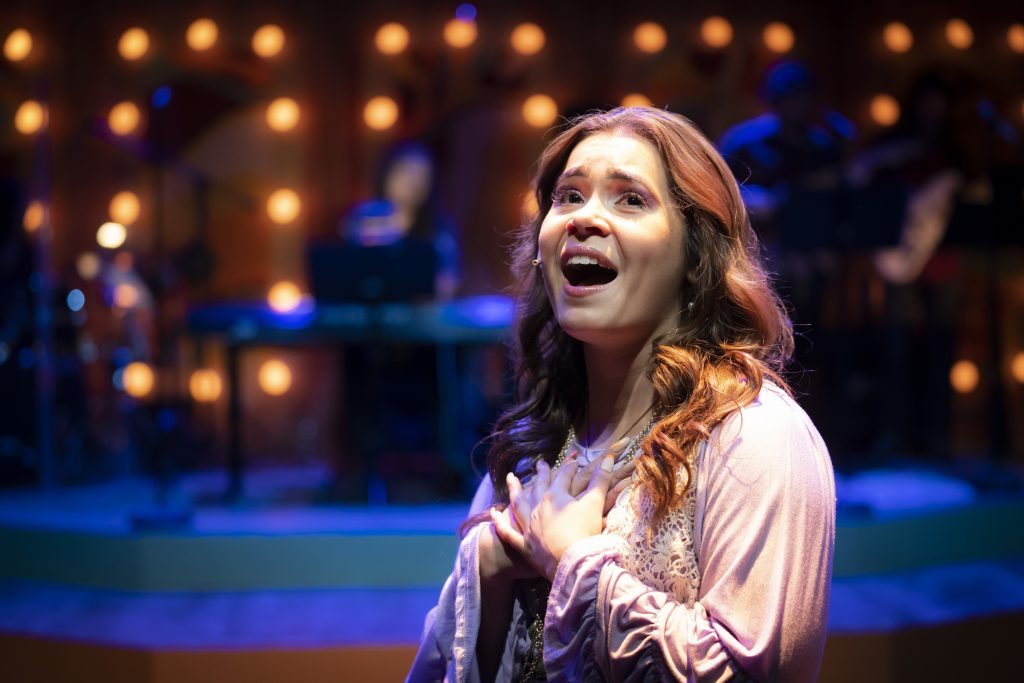 Coming out of the turbulence of the sixties, the seventies were like the morning after (and yes, the Maureen McGovern hit of that name is here), with a mix of silliness in music and culture, like CB radio, streaking and disco ducks, but it was also a time of taking strands of sixties activism and mainstreaming them in the culture, such as feminism, peace and sexual freedom. Helen Reddy’s “I Am Woman” distilled elevated gender equality into an anthem that likely helped take the perceived radicalism of the feminist movement into something universal. (Though later in the show we get to recall how the irresistible groove of The Commodores’ “Brick House” masked the unabashedly naked objectification of the female body in the lyrics.) The production, with its diverse cast and elevation of LGBTQ romance to equal footing with straight relationships, amplifies the best aspects of the seventies. (Post-Stonewall and before AIDS and Reagan, these years were a golden age of sexual freedom, expressed here in songs like the Village People’s “YMCA,” Barry White’s “Can’t Get Enough of Your Love, Baby,” Starland Vocal Band’s “Afternoon Delight” and LaBelle’s “Lady Marmalade.”)

I came of age in the seventies, so take this with a grain of salt if you must, but I would contend that the decade was one of, if not the, most important ten-year span in contemporary music history. It kicked off with the breakup of the Beatles (as we’re all watching on Peter Jackson’s spellbinding “Get Back” documentary) and the wind-down of the Vietnam War, with songs like Marvin Gaye’s sublime “What’s Going On” and Edwin Starr’s “War” rivaling any of the antiwar anthems the white rockers of the sixties produced. And new music genres, all born in the decade—punk rock, hip-hop and disco, which flamed out but led to house music in the eighties—have dominated popular music ever since. 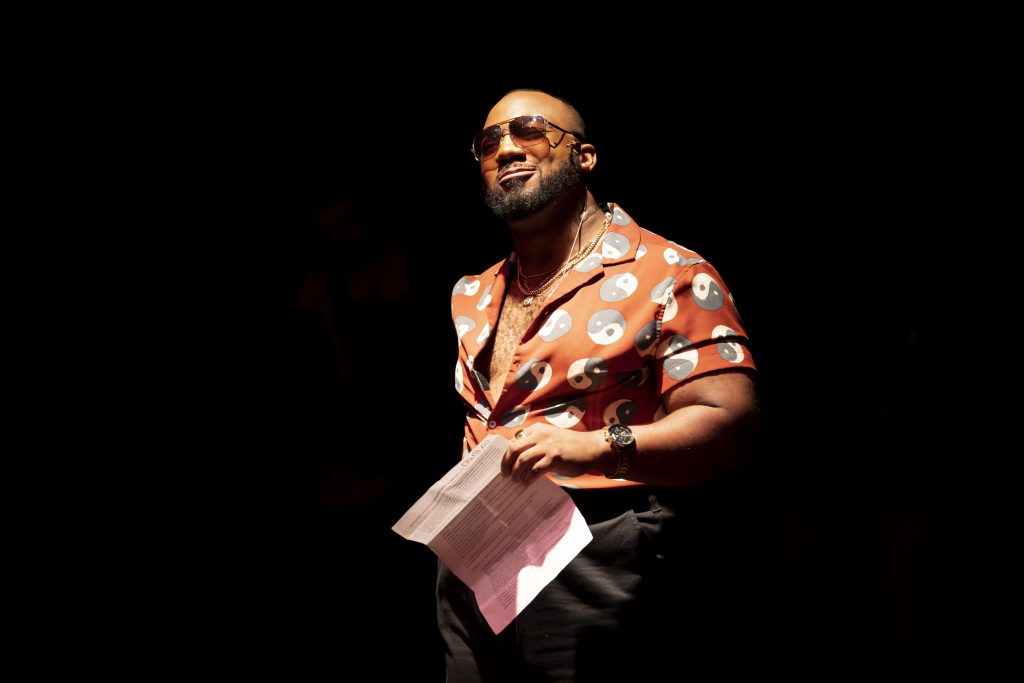 For some, the unbearably (at the time, especially, trust me) banal sound of Debby Boone’s “You Light Up My Life” and the maudlin but melodic likes of Melissa Manchester’s “Don’t Cry Out Loud” and Barry Manilow’s “I Write the Songs” might be the lasting earworms from that decade. Back then, if you just let the song play out, you would be redeemed by a better choice afterward in this last gasp of Top 40 radio which, for all its faults, ensured a mainstream diversity of voices and genres, at least in the seventies. By the end of the decade, the rise of “album-oriented radio” (AOR) led to the polarization of music, with the Chicago-born “disco sucks” movement, a blend of ignorance and implicit racism, still rippling in the broader political culture today. Give me the hopeful strains of “O-o-h Child” any day.