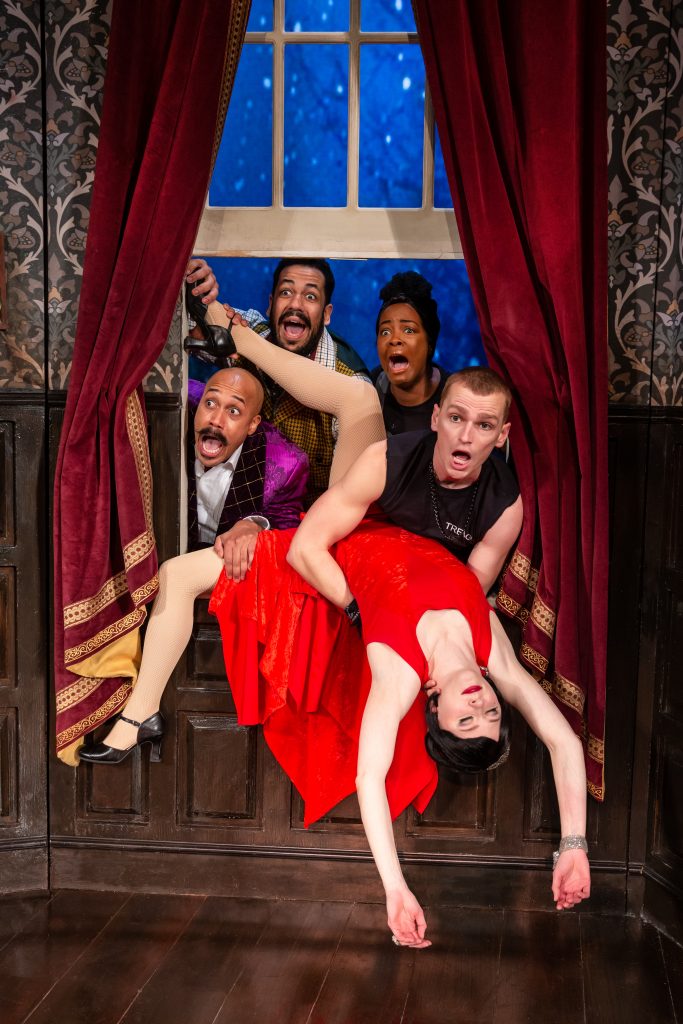 Comedy is famously hard. Comedies of errors are harder still. Comedies of error with pratfalls and falling furniture require mastery of timing, acrobatics, mugging and scripted action that depicts everything falling apart while requiring performers and stage hands to execute everything exactly right. “The Play That Goes Wrong” gets most of the wrongness right. Yet, like the characters in the woebegone pretend production that the real production mocks, it also occasionally falls flat. The problem might be inherent to the structure of the play and its play-within-a-play that is the subject of the title. The “within play” is introduced by the character of the director with a string of apologies that alert us to the company’s shortcomings. And they are short. We learn, for example, of the company’s difficulty in filling its roster of performers, so, for example, its past performance of “Cats” had to be retitled “Cat.” Telescoping the dismal quality of the company allows the real actors on stage to play as dismal actors, but that oddly requires some real skill and balancing the meta-performances. On opening night—it’s also the opening night of the “within”—it seemed that playing the ill-rehearsed troupe was itself a little ill-rehearsed. The action takes place during a production of a misbegotten British drawing room who-done-it, a kind of downmarket “Mousetrap.” It has the usual cast of characters including a trench-coated inspector, tweedy aristocrats, a shady, obsequious manservant, and duplicitous lovers whose secrets make them suspect. And, crucially, there is an easily distracted nitwit behind the scenes who handles the lights and sound effects.

The actors certainly give it their all and it clicked enough of the time for a diverting evening, but often seemed to overdo it with the overdoing it. What’s more, the scripted mayhem didn’t achieve the kind of transcendent choreographed chaos that the best slapstick demands. The set is doubtlessly the most sterling performer in the show, and nearly all the comedic and dramatic tension relies on its reliable failures, many of which are fun to anticipate and many others that delightfully surprise. The show is easy to recommend for families with younger viewers. Fans of physical comedy may also find it a rare treat. Full-on slapstick rarely makes it to the contemporary theater, and almost never as unrelentingly as in “The Play That Goes Wrong.” For all its hitting and head knocking, this is still a gentle-hearted show which calls to mind the kind of physical schtick on old TV variety programs, especially “The Carol Burnett Show.”

“The Play That Goes Wrong” has had long, lavishly lauded runs in other cities. One can’t help but think that the honing of the casts that came with the lengthy runs helped the show have legs, even if the legs do frequently give out.

“The Play that Goes Wrong” at Broadway Playhouse at Water Tower Place, 175 East Chestnut, broadwayinchicago.com. Through May 29, 2022