Breath. Seeing a creature inhale and exhale can be a first clue that we are beholding a living being. Puppeteers work hard to master breathing, both their own and the movement of breath that animates—“gives breath to”—their creations. Creating the illusion of breath is probably as old as the first puppet; ancient forms still in practice, such as Japanese bunraku or Javanese wayang, ritualize it. Collodi, the creator of Pinocchio (1881), understood what breath means to a puppet and so do his readers. Pinocchio’s first act is on the breath, he laughs at Geppetto. In the original version of the story, the finality of the naughty fella’s end, by hanging, comes when Pinocchio can no longer gasp for air. Collodi knew to save that gag for last.

The Chicago International Puppet Theater Festival went on its COVID hiatus around two years ago. It was hardly a deep freeze, though. The festival moved into roomy digs in downtown’s Fine Arts Building giving room for classes, rehearsals, a workshop for making stuff and offices for a growing administrative staff that will handle what is planned to be an annual festival and for nurturing collaborations with performers of all kinds, local and away. Still, what has been the largest puppet theater festival in the country–drawing 14,000 people to its shows and events—missed an outing. It’s sprung back and will be filling stages around the city from January 20 to 30, presenting shows from a wide variety of companies, including some of the most celebrated puppet artists in the country, working in a variety of styles.

Blair Thomas, the festival’s founder (and co-founder of the marvelous, now-belated Redmoon Theater), may have the broadest connections among the nation’s puppet-theater artists. Thomas promises that this year’s fest brings in the very best from all over the United States. Nearly all of the works are new to Chicago. Travel restrictions forced the festival to exclude foreign companies this round. There’s lots of choice, nonetheless. As in the past, some shows will be droll, others buffo, some will be introspective and others more overtly polemical. Few will come anywhere near children’s theater, though young audiences may find the festival transporting all the same. Anyone who loves puppetry or innovative theater is advised to comb the festival’s website and grab tickets for anything that beckons. The site features short clips from several companies. All the shows are very short runs, and many of the shows may sell out in advance. 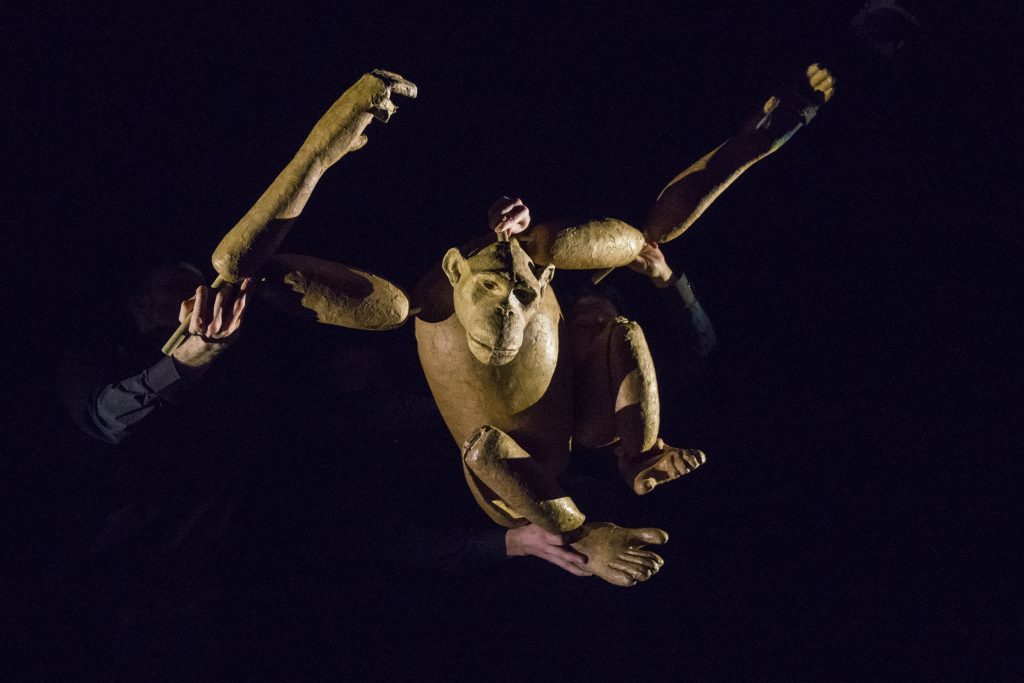 As new life comes to the festival, how appropriate is it, then, that one of its most anticipated productions, “Chimpanzee,” begins with a breath. The show, conceived by Nick Lehane, a Brooklyn-based puppet artist, runs from January 22 to 24 at the Instituto de Cervantes. (Brooklyn is well-represented at the Festival.) It features a life-size puppet of an adult chimp that is manipulated in a style inspired by Japan’s traditional Bunraku theater. Multiple puppeteers work discreetly behind and around their puppets, but very much in view of the audience. The nearly hourlong show begins in darkness then gradually lights the collapsed body of the chimp. It looks every bit a puppet made of parts, including the rods that connect to its body parts so that its puppeteers can move them. But soon the chimp’s chest begins the barely noticeable inflation and deflation of a breath. It’s an illusion, of course. Nothing on the chimp puppet is filling or emptying, but the movement makes it look so. The chimp sits up, still breathing, and looks around in a slow, but utmost chimp-like way at its barren surroundings. The appearance of breath has hooked us. It’s the gateway moment when we suspend disbelief, cast aside the distractions of the humans in back, or the papier-mâché that substitutes for the furry mass of a real animal. That’s the magic of the idiom. It urges us to reconcile contradictory perceptions and brings us over the so-called uncanny valley. “The puppet,” says Lehane, echoing Roger Ebert’s famous remark on movies, “is an empathy machine. And breath is the way in. As soon as the puppet is breathing, the audience is breathing with it.” Just one puppet, a small crew of skillful puppeteers, and an imaginative director succeed where untold computer games, digital virtual reality worlds and robotic animatronics fail. Puppet theater, perhaps more than most other stage work, makes us surrender to a pretend world we see while also presenting us, often undisguised and obvious, the workings of the stagecraft that runs it.

In creating “Chimpanzee,” Lehane drew on accounts of research experiments on chimps, such as those done at the Chimpanzee and Human Communication Institute at Central Washington University in Ellensburg, Washington. In those, chimps were placed in human home-like environments, were taught American Sign Language and trained to assimilate into a lifestyle of a human family. Lehane’s show follows a fictional chimp whose homestay has ended and has been moved to a small cage in a research facility elsewhere. Lehane, a longtime vegan, felt that the literature on the experiments focused on the human perception of the animals and failed to reckon with what might have been the subjective experiences of the chimps. He calls “Chimpanzee” a “historical fiction” where imagination fills in the gaps of the known facts.

Animals’ subjective experience, Lehane noticed, still eludes scientists but is the subject of a robust literature in philosophy. He delved into the writings of contemporary philosophers, including Thomas Nagel’s nearly canonical essay “What Is It Like to Be a Bat?” (1974), while creating the work. His interest in “interiority,” the experience a being has that is usually accessible only to the experiencer, deepened. Happily, a good puppet artist, like any good actor, can be brilliant at bringing “interiority” outside, or at least the appearance of it. In “Chimpanzee,” a show built without dialogue and leaning on props, the interiority is in the breath, the subtlety of movement and a puppet’s responses to its confines. “Chimpanzee” is an imagining by Lehane, and his puppeteers, of a chimp’s subjective experience as its thinking roams through what it can recall of its home-like surrounding and the world of the cage it is in now. Interestingly, Lehane does not imbue his chimp with a narrative imagination, but rather sticks to the current understanding of non-human primates’ cognition. The animal is able to recall sensations, including pleasures, but not to put them into the context of linear time. Lehane’s empathy machine makes us feel that bewilderment, too. “Chimpanzee” is a profound, entertaining and ultimately heartrending work of theater. 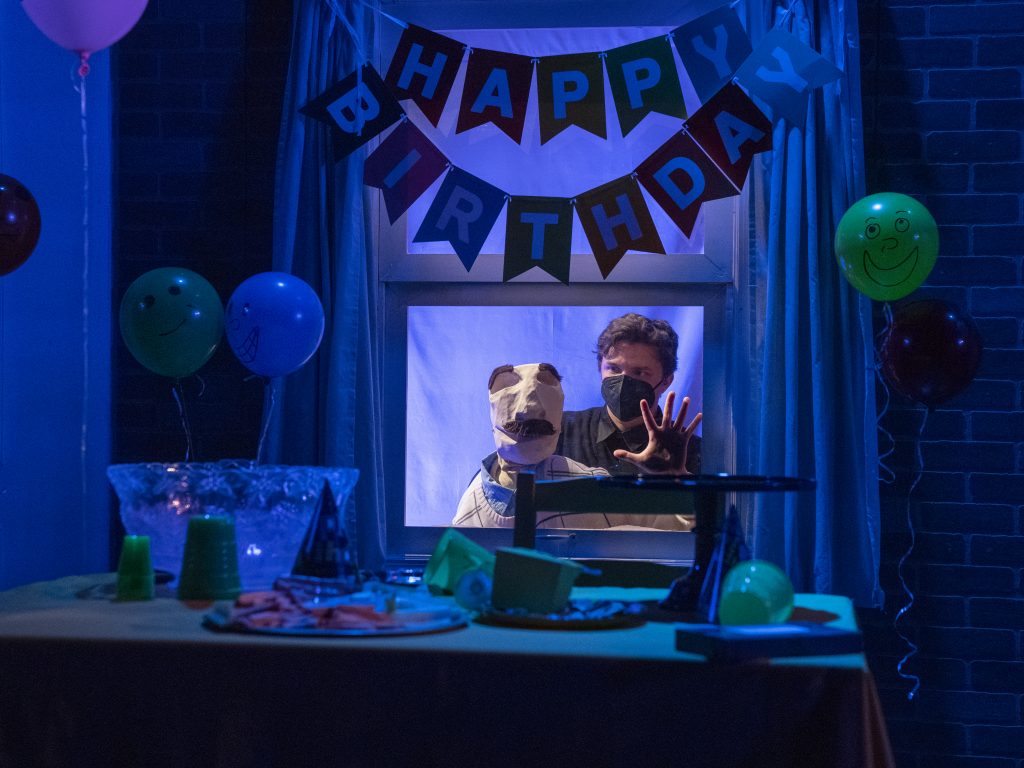 “Chimpanzee” isn’t the only production that introduces us to a solitary primate. “Bill’s 44th,” showing at the Chopin Theater January 25-27, introduces a man who has festively set up his home for his non-milestone birthday party, to which no guests will show up. Or, rather, no human guests. The creation of Andy Manjuck and Dorothy James, who also hail from Brooklyn, “Bill’s 44th” earned a New York Times’ “Critics Pick” when it played the Big Apple.

The creators’ presence in Chicago is evidence of Blair Thomas’ reach in the world of puppet theater. They met Thomas six years ago at a theater in an  arctic fishing community on Norway’s Lofoten Islands, an encounter that ultimately resulted in their Chicago festival booking. The sparsely populated islands have an unlikely collection of theaters, and perhaps were inspiration for a show that proves that ostensibly lonesome places can be populated and enlivened by imagination.

“Bill’s 44th” originated when Manjuck and James took part in a puppetry slam. They had to create a puppet and a ten-minute piece of theater nearly on the spot. This also accounts for the aggressively homemade quality of the puppet Bill. He’s been refined only a little since that first showing because the puppet artists “fell in love with Bill” as he was at the moment of his creation. After they animated him, that is. He has no legs, and no eyes but is a thoroughly convincing presence anyway. Bill, who the artists describe as “sort of a mix between Mr. Bean and Charlie Chaplin,” suffers a string of pitfalls which he continually overcomes. There are all kinds of puppets in “Bill’s 44th,” running through all sorts of funny schtick and operating at different scales, too. There is a particularly clever and funny bit with wily helium balloons. It’s not all jokes. “Bill’s 44th” also explores the poignancy of birthdays as we age, including the loneliness that often creeps in over time as we mark later years. 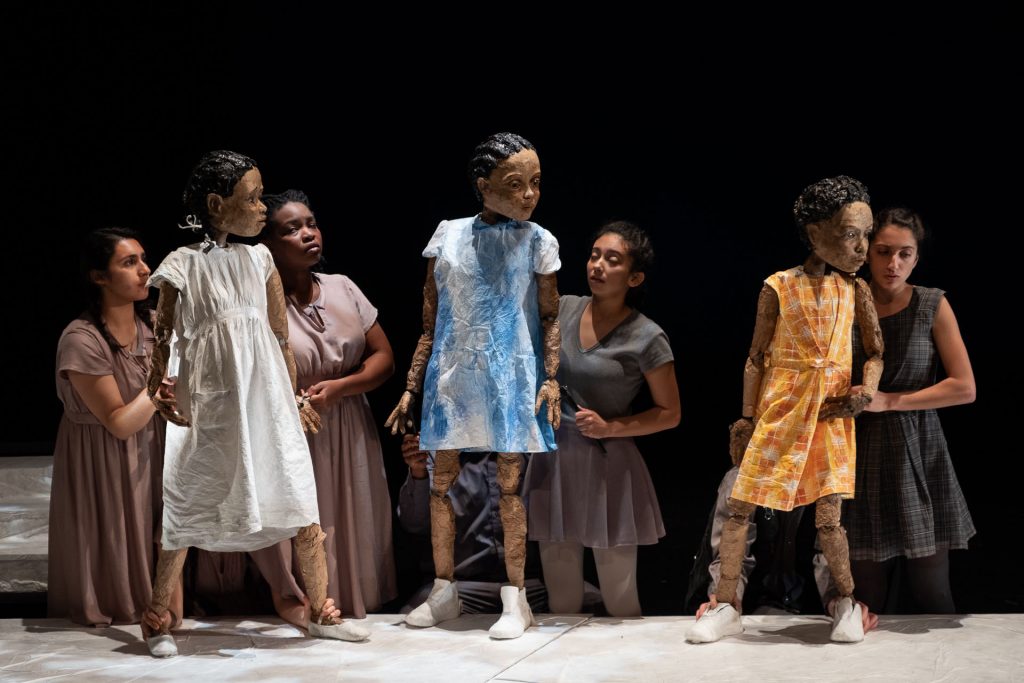 “The Bluest Eye,” draws on Nobel laureate Toni Morrison’s seminal book and a later stage adaptation created for Steppenwolf Theatre Company by Lydia Diamond. The puppet theater version will run January 28-30 at the DuSable Museum of African American History in Hyde Park. It was created and adapted by Janni Younge and Margaret Laurena Kemp and employs life-size puppets that also require several puppeteers to manipulate them. The idea for the production, which Kemp had been mulling for a few years, got a boost six years ago from the theater program at the University of California, Davis where Kemp, an active performer herself, teaches voice and acting. One of Kemp’s students, like many theater students in U.S. universities, faced graduating without ever having a notable role on the stage. “She was a wonderful actor,” says Kemp, who wanted to find a way to give her stage experience. Students suggested a reading of Diamond’s adaptation of “The Bluest Eye.” That happened, but Kemp thought it could go into a new direction.

The story’s unsparing examination of the effects of racial hatred on the lives of a Black family and their foster child, Pecola Breedlove, struck Kemp as a good candidate for puppet theater. A decade earlier, Kemp spent half a year in South Africa where she studied the proceedings of the Truth and Reconciliation Commission. There, she took particular interest in how puppets were employed to help victims of Apartheid tell tales that were too traumatic for the victims to relate directly. In the early days of conceiving the work, Kemp turned to Younge, a South African puppet artist she met during her time there and their collaboration began. Kemp, who went to Northwestern and studied with Frank Galati, had lots of experience in visual theater, but not puppetry. Nevertheless, the Bunraku style seemed to fit the source material. In performance, the life-sized puppets are arresting and up to the gravity of the material. 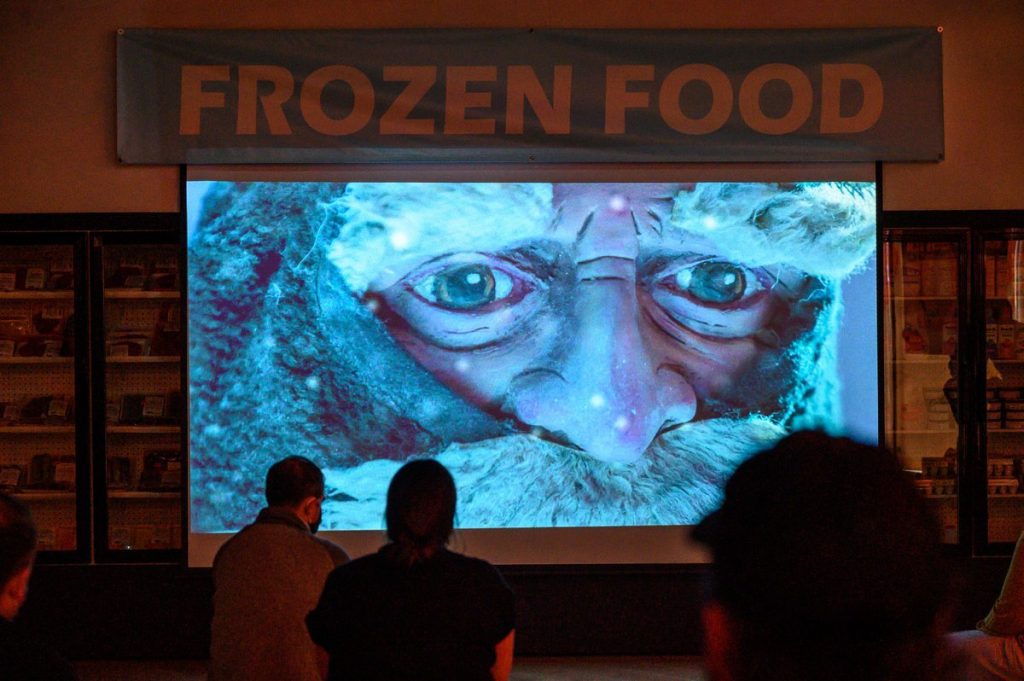 In addition to more than a dozen other shows, this year’s festival will fill rooms in the Wrigley Building with a hybrid exhibition-puppet show-movie created by Robin Frohardt, “The Plastic Bag Store.” The physical “store” replicates many aisles of a standard-issue grocer except that all the products—the fruits and vegetables, meats, dairy and packaged goods–are modeled from disposable plastic bags. Often uncannily. There was once a multimedia puppet show about the world’s plastic apocalypse to go with the store. That show was captured on video and will be shown at the store.

Beyond the usual menu of day and evening shows, there will also be a late-night puppet cabaret, “Nasty, Brutish & Short,” curated by Rough House Theater, Chicago. Think of it as rapid improv with puppets. The puppets will need to catch their breath. And we, in turn, will catch theirs.