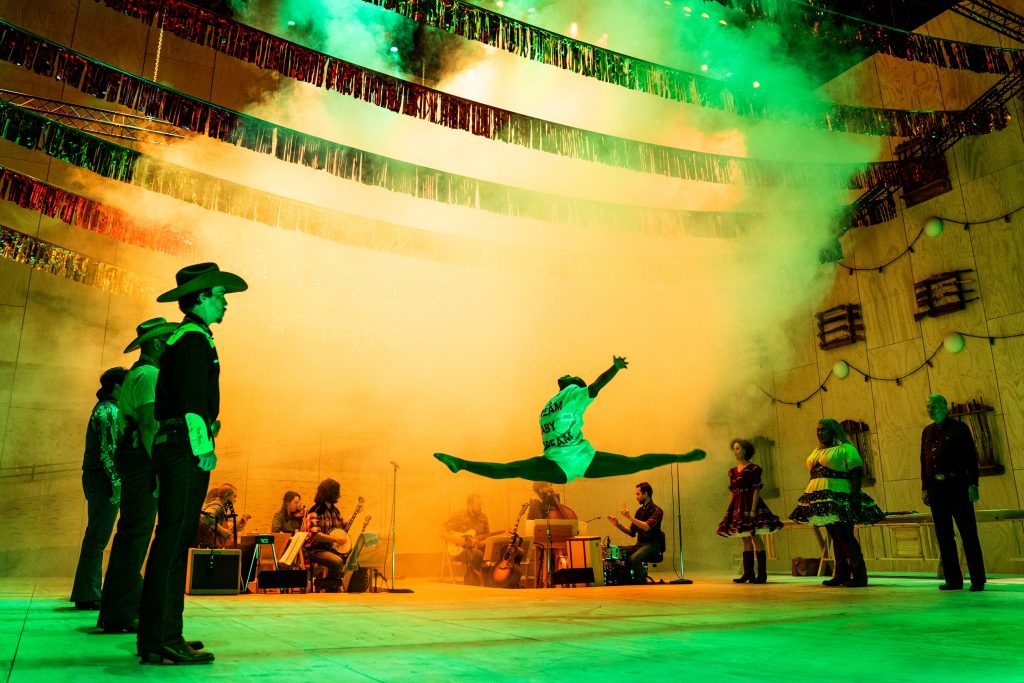 Time has a way of making the radical ordinary. Nearly eighty years ago, when Rodgers and Hammerstein’s “Oklahoma!” came sweepin’ down the plain, it revolutionized everything about musical theater and forever changed its template.

In ensuing decades, however, “Oklahoma!” has come to embody everything that is conventional about musicals. Thus, a staging that sweeps those plains clean and restores a sense of the innovation and daring of the original is a welcome thing.

Such is the case with Daniel Fish’s Broadway staging—now on a national tour—which updates the proceedings with a diverse ensemble performing and watching along with us. If you’re an aficionado of the show, it is fun to try and guess who will be who as the cast sits at picnic tables shucking corn. I have seen a dozen-plus productions and I correctly picked out only one major character.

The music is performed by a seven-piece bluegrass band that has cast members join right in. Curly (Sean Grandillo) dons a guitar now and then and all of them are left vocally exposed, offering intimate yet virtuosic traversals of the iconic Richard Rodgers score.

The issues at stake about the possibility of the cowman and the farmer becoming friends—let alone intermarrying—are dealt with as if these were Republicans versus Democrats in a post-Trump era.

Jud Fry (Christopher Bannow) is usually played as a heavy, but here is a more sympathetic character who can even generate some sparks with Laurey (Sasha Hutchings) before his darker side is more subtly revealed. And in case we might miss it, those scenes are played in the dark, literally.

For comic relief we have a sage-like and coquettish Ado Annie (Sis), who offers an astonishing portrayal that delightfully breaks the mold in every sense.

Unlike the Spielberg “West Side Story” film, which jettisoned the Arthur Laurents book to update the narrative, this adaptation modernizes while remaining astonishingly faithful to Oscar Hammerstein’s original.

That said, there are changes. And they are shocking, to say the least. But they are thought-provoking and are organic to the fabric of “Oklahoma!”