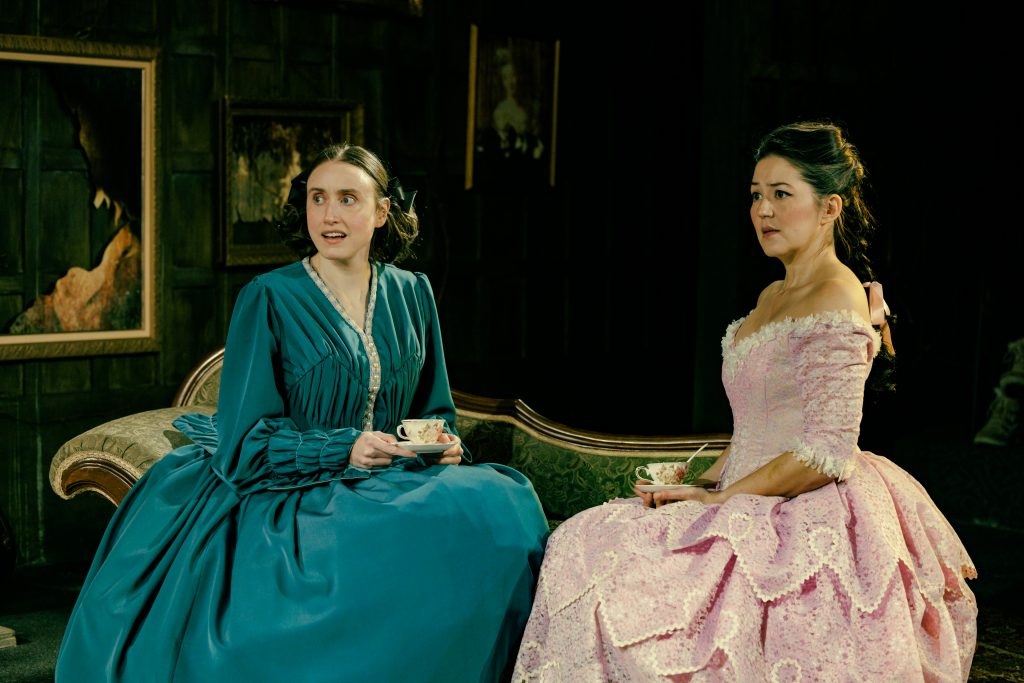 Christina Gorman and Audrey Billings in “The Moors”/Photo: Fadeout Foto

Should plays that pay tribute and also parody other works be obliged to click with audiences that are unschooled in the works’ source material? Or is a giant inside joke just as worthy as something more universally connecting? Should reviews of plays begin with questions?

If one were largely ignorant of the novels of the Brontë sisters, as I am, one might find these issues weighing heavily while taking in “The Moors,” which plays off the mental and physical landscapes of the work of Charlotte and Emily (perhaps not Anne). The play, by Jen Silverman, is a dizzying patchwork of farce, “Young Frankenstein”-like clownishness, mental illness and exalted poetry. I jotted down several brooding lines to see if they were lifted from the Brontës themselves, but could not match them.

The moors aren’t natural settings for high-wire acts, but this one does finally pull together. The action centers on the arrival of a city governess in the isolated and staunch home of two repressed, abused and abusive sisters. Bright, cruel Agatha, played with chilling controlled intensity by Karen Aldridge, is the older sis in charge of the younger, dimmer fantasist Huldey, who is played with equal intensity and convincingly gothic pallor and gaily sad nuttiness by Christina Gorman.

Into their lives enters the very English governess Emilie, who was lured to the manor house by a string of falsehoods. Emilie is played deliciously peachily and creamily by Audrey Billings, who begins as a kind of Fräulein Maria, complete with guitar, and evolves into a take-charge lover. Some real surprises ensue and the plot twists are worth the wait.

Even in their pop-culture outings in film, the Brontës make much of sexual perversions. “The Moors” twists that and makes what would have been regarded as perverse in the sister’s day, at least, less, um, unmoored. There’s some interspecies romance, too, though the relationship between the flighty, feathery female moorhen and the big dog turns out the way one might expect in a work in which males, though barely present, are as grim and cold as the landscape.