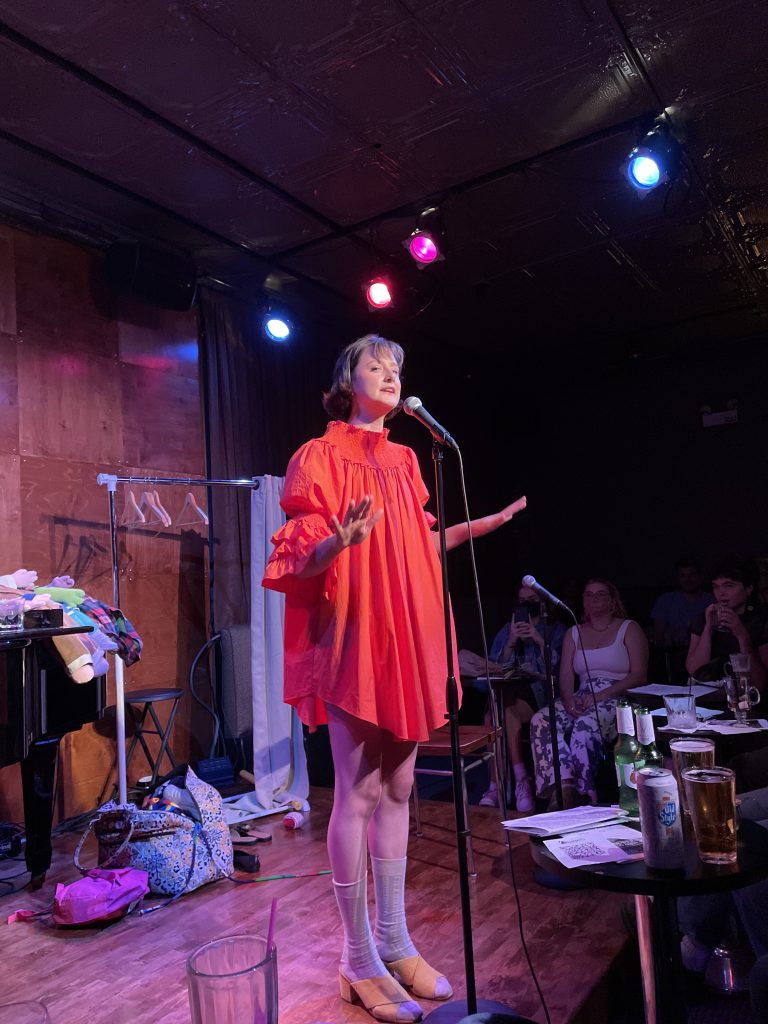 Boy, can Jackie Smook sing legit. She delivers with all twelve tunes in her one-chanteuse, one-piano-man and several-puppet cabaret. Smook resurrects some thrilling but neglected vintage showtunes, sometimes sung as written and sometimes as slightly rewritten to fit her script. The pastiche begins with the 1932 operetta-ish “Should I Be Sweet” by Tin Pan Alley mainstay Vincent Youmans (most famous for “Tea for Two”), and we know right away this won’t be an evening of world-weary, drolly wry-woman-of-a-certain-age-and-vocal-nodes cabaret. Smook’s show is more of the fumbling-wide-eyed-kid-with-a-big-heart-and-delightful-voice-gets-the-part variety. Smook’s stage character’s wraparound narrative, too, plays like “A Chorus Line” for kids (but no dancing) in which a few reprimands and tough encouragement from schoolteachers—the puppets—harden her into making the most of her talents.

Smook’s singing, puppetry, voice characterization and mugging have vaudeville polish. Still, but for a few expletives, the writing and Smook’s own stage character are so light that she gives us little but her charm and her songs to care about. That’s enough for a diverting evening, but… picking up on those pedagogical reprimands… Jackie Smook, your big talent deserves more! The magic of Smook’s musicianship is enabled, too, by the deft accompaniment of Chicago composer and improvis4r Joey Chimes.

The one-hour show with a ticket, plus the mandatory two drinks and tip, can add up to a Broadway ticket price. Smook and Chimes make it worth it on the strength of excavated and more familiar tunes, including the jaunty “High is Better than Low” from the 1963 Mary Martin vehicle “Jennie,” 1969’s “The Bravest Individual” from “Sweet Charity” and the lovely 1981 Sondheim ballad “Goodbye for Now” from the film “Reds.”

“The Jackie Smook Program of De-Dumbification” plays one night each month through June: 8pm on Saturdays February 4, April 2, May 7 and June 4 and late-night March 5 at 10:30pm. $20 plus two-drink minimum. Davenport’s Piano Bar and Cabaret, 1385 North Milwaukee, davenportspianobar.com.