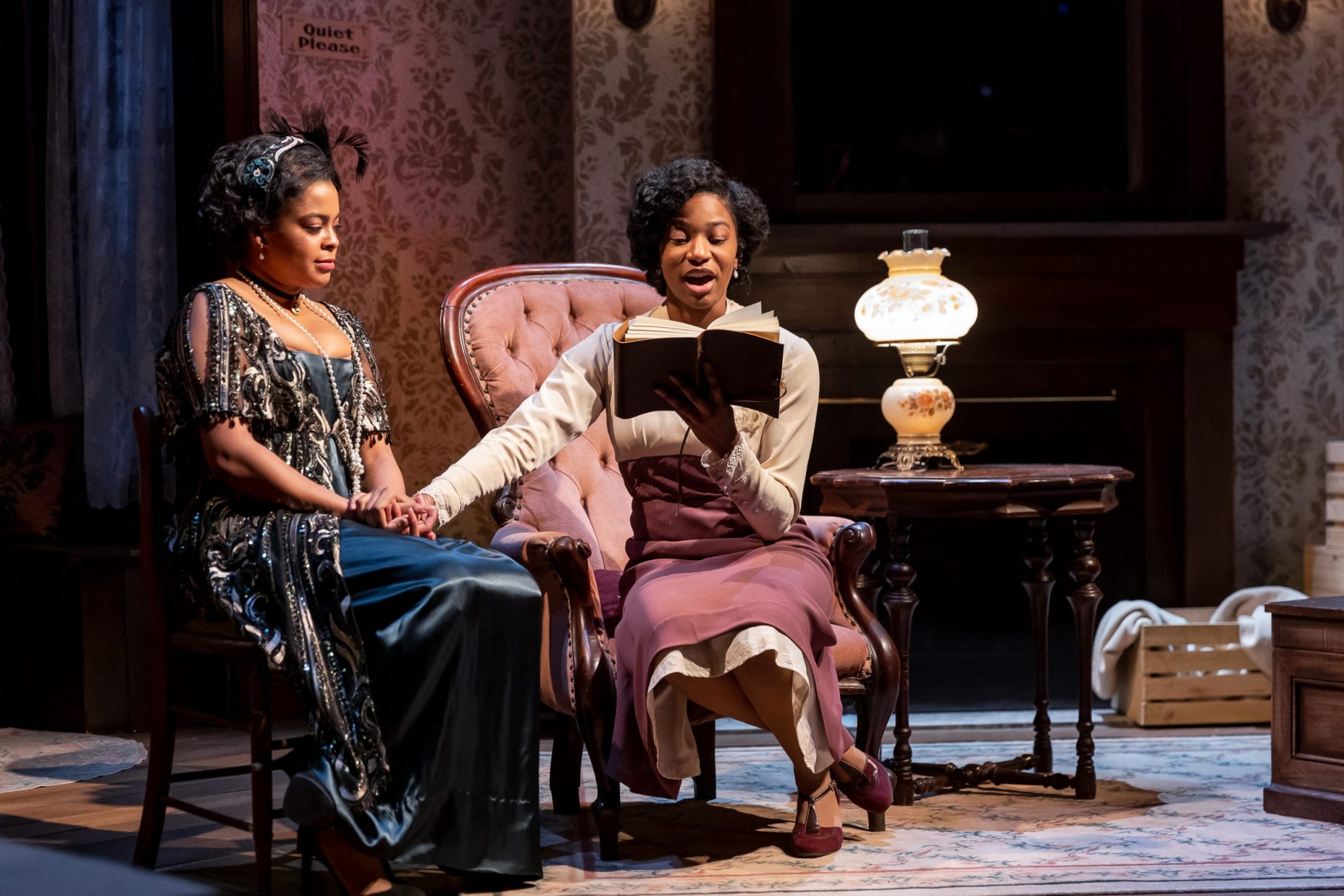 Two sisters are cleaning out the Victorian house of their recently deceased mother. The older, Janet, is a homebody, a bookworm who wants to stay in and read her mother’s journals rather than join her vivacious sister Annelle and her husband Marcus in a night on the town—Annelle has a matchmaker agenda for her elder spinster-in-the-making. Soon the stood-up would-be-suitor Franklin shows up at the home anyway and proves to be every bit the perfect match for Janet in a battle of wit and will.

This is the kind of setting and storyline for hundreds of plays that have been staged for decades, and that’s the point behind playwright Tyla Abercrumbie’s “Relentless,” in its world-premiere production. For the essential difference here, immediately apparent in the casting but not addressed in the script until more than fifteen minutes in, is that virtually all of the characters are African American, and they represent a prosperous Black narrative almost never seen in depictions of that era. Rather than the white creatures of privilege drawn from generations of passive wealth we often see in depictions of the Victorian era, the characters in “Relentless” are the children of slaves, living in a 1919 that saw a nation turn its attention away from World War I and the flu pandemic and toward a renewed persecution of its Black citizens that would come to a head in that year’s “Red Summer.”

In a series of smooth, skillful transitions, the reading of the journals comes to life, with the character of Janet (Jaye Ladymore) and Annelle’s (Ayanna Bria Bakari) mother, Zhuukee (Demetra Dee) living through what the play’s principals are reading, in scenes with her own mother and, later, with her white mistress Mary Anna Elizabeth (Rebecca Hurd). In one of a multitude of ideas that is shown rather than said, we come to understand how an act of partial reparations, when the mistress grants Zhuukee the home in Philadelphia, elevates the economic prospect of her family from that point forward. No need to even mention how the U.S. Government’s betrayal of freed slaves over reparations, or decades of economic repression and even terrorism, such as the Tulsa Race Massacre, crushed the opportunities for the multitudes less fortunate than Janet and Annelle.

The relationship between Zhuukee and Mary Anna is indicative of the layers of meaning in Abercrumbie’s script. On the surface, Mary Anna is a “good” mistress who sees herself as both a friend and even sapphic lover of Zhuukee, who she calls by her slave name, Annabelle Lee. Even if the audience might be tempted to see Mary Anna sypathetically, Zhuukee never mirrors her mistress’ affections, she never calls her friend, nor lover, and she is filled with the joy of freedom when she finally leaves her slave home and moves to the house in Philadelphia. Abercrumbie leaves no room for misunderstanding Mary Anna from the start, describing her in the cast-of-characters page at the front of the script as an “owner of Black bodies.”

Though the characters in “Relentless” are educated and well-to-do, they are far from reserved in world view—their rage seethes, hidden only by the comfort of their surroundings and the decorum of their lives. (At one turn, Annelle points out that Janet has white friends, to which Janet sharply retorts, “I have associates. Not friends.”) It’s a mistake to assume that the expression of Black anger is confined to those marching in the streets or staging acts of civil disobedience. “Relentless” makes the point that this rage is universal.

It’s no mistake that this work takes the well-worn model of the chamber play and infuses it with a new level of richness. In her recent wrap-up on this year’s Sundance Film Festival, critic Manohla Dargis gets to the heart of it:

“It can be easy to think of representation as an abstraction, as a political cudgel, a tedious rallying cry, a bore. Again and again this year, the sight of all these bodies, particularly of women… was a reminder that these representations aren’t boxes that were ticked off. They are the embodied truths, pleasures and terrors of women and people of color who, having long served as canvases for fantasies of otherness, have seized control of their own images.”

Abercrumbie is an accomplished Chicago actor—full disclosure, she plays a small role in a film Jan and I produced, “Dreaming Grand Avenue”—and a talented and prolific playwright as well. With “Relentless,” she has crafted fascinating, real characters and endowed them with witty, shattering dialogue, which the superb cast, under the steady hand of director Ron OJ Parson, brings to life with such charm that the three-hour running time flies by. The story reveals layers of anger with nuance rather than big dramatic acts. But this is not to suggest that the story will be easy on your soul, for Abercrumbie is relentless in her justified rage at the unforgivable sins of “that disfigured creature,” of the irreparable damage wrought and perpetuated by America’s original sin.

At TimeLine Theatre at Theater Wit, 1229 West Belmont, through February 26.