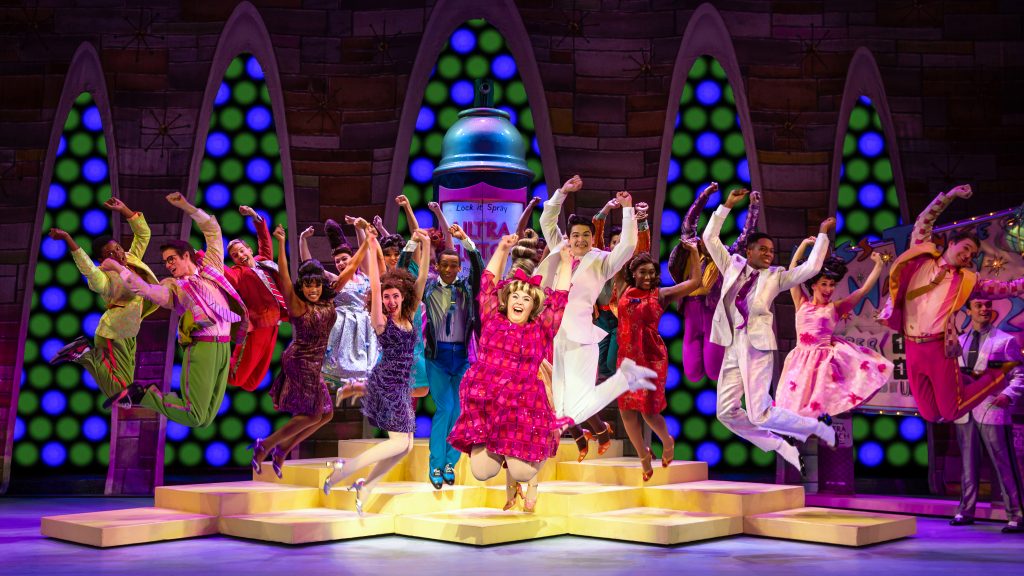 It’s odd to think of a post-millennium musical as already a bona fide classic, complete with wide appeal across generations and races. But that is what has happened with the now twenty-year old “Hairspray.”

Kids who grew up with this show are now parents bringing their own kids. Songs are mouthed along word-for-word, every dance step is anticipated. Its diverse audience knows exactly what “Hairspray” is and savors every familiar spritz.

Originally a non-musical film by director John Waters, the tale of a teenage girl fighting fat-phobia and crusading for social justice in the early 1960s strikes a chord for those judged merely on size, color or appearance.

Musicalize that struggle with a tuneful, dance-friendly score that stays true to the era yet delivers all of the essential elements of a Broadway blockbuster. Then brightly wrap it all up like a pop-art comic book and you have an engaging, feel-good show with a message.

Few Broadway properties with as many moving parts as “Hairspray” can be effectively brought off by a non-Equity cast without a significant drop-off in quality. But the national tour that opened Wednesday at the CIBC Theatre to a capacity crowd despite a blizzard, manages to traverse the show with momentum and gusto.

The scenery, sets and steps of the original Broadway production are evoked with care, albeit staged and with musical forces on a smaller scale.

A “Hairspray” tradition is that the role of Edna, Tracy’s mother, be played by a male in tribute to Divine, the late, legendary drag performer who originated the role in John Waters’ 1988 film. Harvey Fierstein created the role on Broadway and reprised it for NBC’s “Hairspray Live!” telecast nearly a decade-and-a-half later, while John Travolta played Edna in the 2007 film.

Andrew Levitt, who has performed as drag performer Nina West for over twenty years, brings more maternal grace to the character than we are used to, without sacrificing any of the comedy. The laughs are with Edna more than at her, a refreshing approach.

Another cast standout is Emery Henderson as Tracy’s friend Penny Pingleton, who brings more to the journey of that initially repressed character than the usual portrayal. And Christopher Swan brings poignancy to the role of Tracy’s father, particularly in his love duet with Edna, “(You’re) Timeless to Me.”

Some of the other roles come off caricature-ish, but the voltage is high in the show’s signature ensemble numbers.