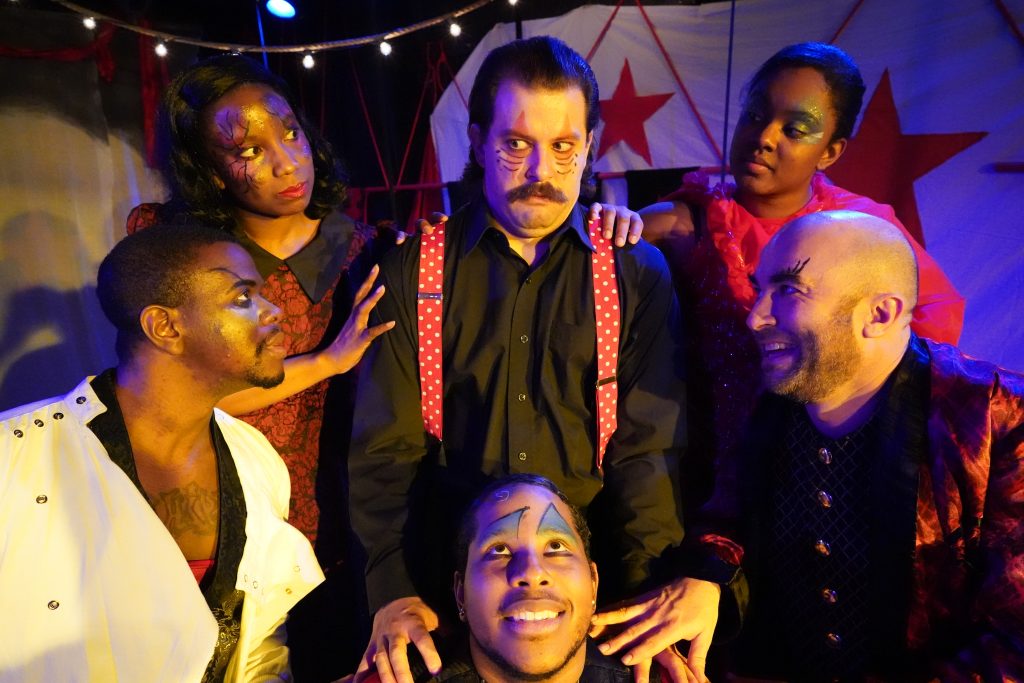 Trap Door Theatre’s production of “The Martyrdom of Peter Ohey” is a carnivalesque, farce-fueled satire, exploring the individual’s relationship to society’s overbearing institutions. Under the direction of Nicole Wiesner, the cast goes for broke spectacularly to create one of the zaniest theater outings in recent memory.

“The Martyrdom of Peter Ohey” was written in 1959 by Polish playwright Slawomir Mrozek, a journalist and cartoonist by training during Poland’s Stalinist era. Mrozek turned from journalism to creating absurdist satires, the peculiarities of which helped him evade censorship. In this adaptation by director Wiesner, the oddities of the play take focus, evoking a living cartoon straight from Mrozek’s imagination. “Peter Ohey” shows how the hero of its title (Dennis Bisto) deals with the appearance of a bloodthirsty tiger in his bathroom. Peter is a decidedly unpolitical and oblivious person, more interested in his daily newspaper than his wife or children. He’s so oblivious that it takes a buffoonish Official (Carl Wisniewski) to inform him that there’s a wild animal in his own home. The tiger attracts a pageant of characters that seek to exploit the tiger on behalf of their respective institutions. Representatives of science, economics, art and government make themselves at home, while Peter is too ineffectual to stop them.

Each new character is styled after a circus act, emceed by Matty Robinson’s deliciously wicked Circus Manager. The Official is a prancing clown; a salacious Scientist (Keith Surney) is a lion tamer by way of Cirque du Soleil’s adults-only “Zumanity”; even a Tax Collector (Natara Easter) gets to conduct a Kafkaesque audit while on a tightrope. The physical comedy and inventive staging are spectacular, with every actor getting an opportunity to shine. Mrozek’s characters are types, yet the actors fill them to bursting with grotesque gusto. As Mrs. Ohey, Venice Averyheart delivers a parody of a kitchen-sink monologue while performing a rope-binding act and rolling on the floor. When the Scientist transforms Peter into a tiger, it’s a thrilling coup de théâtre. Even the restrained performance by Bob Wilson as the Old Hunter had the audience rolling in their seats from his sheer conviction. (I will never hear the word “stand” the same way ever again, thank you.)

While the spectacle in this production of “Peter Ohey” is thrilling, the satire at the heart of the text is lost in the shuffle. This production is less interested in dwelling on what is being satirized, exactly, than delivering a well-crafted farce. Slawomir Mrozek’s thesis may be deliberately opaque because of the political circumstances in which he wrote “Peter Ohey,” yet his audience would have had context to get the joke. This production of “Peter Ohey” may suffer from the so-called “satire paradox,” where the satire could be interpreted one way or another depending on your political bias. Lean left, and you see Peter as a victim of opportunistic free-market types who exploit the economic development of his house. Lean right, and you see Peter as a victim of bloated bureaucratic involvement that infringes on his individual liberties. Regardless of your interpretation, it’s clear that the tragedy at the heart of “Peter Ohey” is that when Peter realizes he’s been a clown in society’s circus from the very beginning, it’s far too late.

While the specific target of its satire may be unclear, “The Martyrdom of Peter Ohey” is still an undeniably engaging production, and one of the most stylish, inventive, anarchic farces you’ll see this year.