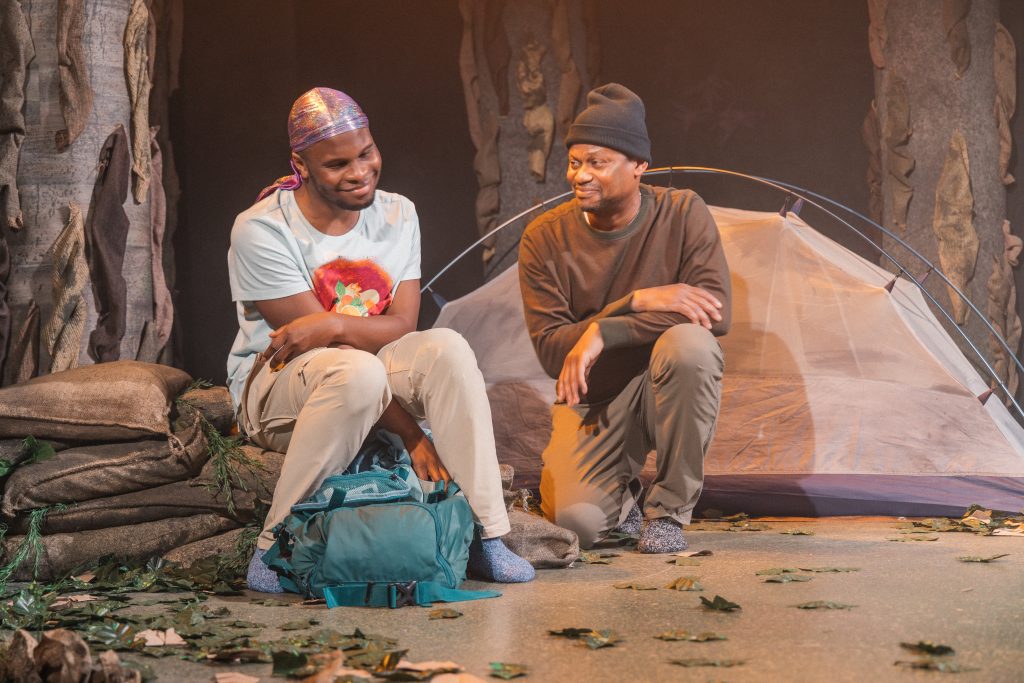 Ty (Terry Guest) and Stephen (André Teamer) reflect on their trip as they prepare to pack up in “Queen of the Night” at Victory Gardens Theater/Photo: Adrian O. Walker

Seven-hundred-thirty-five days. That’s how long it had been since Victory Gardens Theater opened their last in-person show, “How to Defend Yourself,” to this production of “Queen of the Night.” That tremendous number of days was brought up in the pre-curtain welcome with artistic director Ken-Matt Martin and acting managing director Roxanna Conner. Seven-hundred-thirty-five days since we first learned self-defense and now, in a world that seems so distant, we’ve learned self-reliance in defense of our own corners of the world.

That’s where Ty (Terry Guest) is. He’s been in self-reliance mode since childhood, protecting his heart from the poison of the world. Now he’s in the middle of the woods with Stephen (André Teamer), the father who never understood him. What good can sleeping on the ground, tying food up to keep bears away, and eating “half-cooked food” do for a fractured father-son relationship?

For many of us the last two years haven’t just been a blur—they’ve been a permanent shift. A realization that those cracks we saw (or didn’t see) in some of our families were foundational. The pandemic, racial reckoning(s), and the countless global crises have been seismic activities in our lives. Loved ones turned strangers. To take a page from Ty’s book, let’s cue up Céline Dion’s “All By Myself.” But maybe that’s why we need a camping trip with Ty and Stephen.

In the intimacy of the Richard Christiansen Theater, the audience members are the fireflies, watching over Ty and Stephen as they slumber or cook over a bonfire. Guest and Teamer, with their idyllic familial chemistry, show us what it means to see someone. After all, like Stephen says, therapy teaches us a lot about ourselves while also teaching us about everyone else. Guest’s exuberance is the embodiment of a son doing his best, not for the sake of his parent, but for his own. While Teamer is the perfect fatherly figure with equal parts grit and sincerity.

“Queen of the Night” examines multigenerational Blackness through a queer lens. It pushes back against traditional notions of gender identity, particularly for young Black men in the community. When Ty lets his walls down for a moment of raw vulnerability, we recognize why he is so afraid of being left alone with the looming threat of nearby bears. This work is something we desperately need right now. Not just for ourselves as individuals, rather for the child inside all of us begging to be recognized for who they are with no regard for “what they should be.”

travis tate’s play interrogates preconceived notions of ourselves and the ones we hold against others. In just under ninety minutes, Ty and Stephen try to answer for themselves, and us, how we can overcome the craters that divide us from one another. Under Martin’s careful direction, the minefield of uncomfortable family conversations feels less dangerous. Those conversations, some for the very first time, seem manageable. Although I would still rather get mauled by a bear than talk politics with my family.