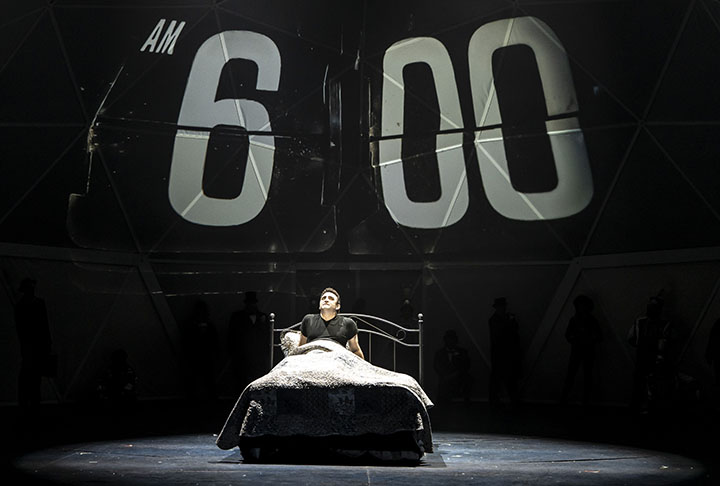 When I mentioned to a friend that I was going to see “Groundhog Day, The Musical,” she sent me a blog by Rabbi Steven Stark Lowenstein of Glencoe’s Am Shalom congregation. Writing on the 1993 Harold Ramis comedy that is the musical’s predecessor—Ramis occasionally visited Am Shalom—Lowenstein noted that “The movie is a curious favorite of faith communities and the subject of many sermons and lessons.” The famous film, like the musical, follows TV weatherman Phil Connors (Alex Syiek), who by some magic is forced to relive a particular Groundhog Day in Punxsutawney, Pennsylvania more than a thousand times until he breaks the spell by learning to be, shall we say, a mensch. To Lowenstein, though the story has no references to religion, it nevertheless captures what in Jewish scripture is God’s chief expectation, that people spend their lives bettering life for all on Earth. He notes, too, that clergy in other faiths frequently find profound meanings in the story. It might be, about, say, loving strangers, reincarnation, or Heaven and Hell.

And now “Groundhog Day” is a musical, which in the Paramount Theatre’s lively, funny, sometimes darkly comic, tuneful, cleverly staged production, the story touches all those notes. There still isn’t any overt religious trumpeting, but there is a spirited pit orchestra. Some of the musical numbers are daring fun. “Nobody Cares,” sung by desolate town drunks Ralph and Gus (Michael E. Martin and Aaron Conklin), is certainly the most hilariously upbeat tune about a suicidal drunk driver who throws up in his mouth that ever, er, graced a musical.

As the action progresses, comic songs give way to ballads, some bitter, some sweet. Rita (Phoebe González), the producer Phil works to bed, kicks off “One Day,” a gripping serial ballad of disappointed hopes sung by the whole town that is practically a show in itself.

The large cast is universally strong. The ensemble singing is wonderfully tight in sound, while the actors affect a community of distinct colorful small-town characters. Because the action in the story repeats with slight changes several times, we get to see the characters make subtle and amusing tweaks. Of course, the biggest changes come to Phil. Syiek brings all the caddishness Bill Murray had in the movie, but adds some welcome intensity. That makes Phil’s ultimate transformation even more moving. And this Phil, and González as Rita, sells their songs in ways that give their characters depths that were not plumbed in the film version.

The Paramount may be the perfect place to see a show about new beginnings. Even before the curtain rises, the gorgeously restored and revived Art Deco movie palace primes us to the idea that redemption and flourishing can come from repeat tries. Hallelujah.