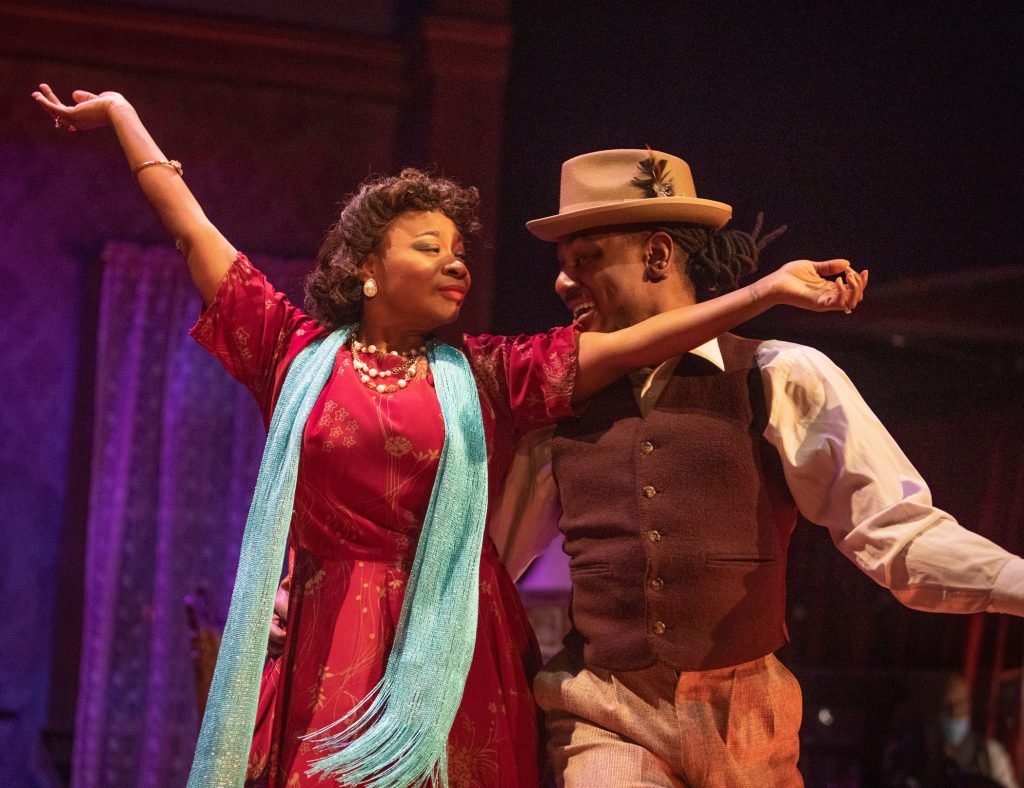 A clever, wordless sight gag about the circular economy among the ladies and the men who are their clients and rent collectors in a shady Depression-era Chicago hotel opens “Blues in the Night.” That’s the last soundless moment in this musically superb, deeply affecting songfest. Hints of narrative drama waft through the smoky last-chance inn where the action is set, but it takes imagination to fill in a storyline. In place of plot, we get five rich character studies told in song and in dance. Four singers, three broken-dreamed women with unbroken pipes, a caddish fellow who can croon, and a silent man who can step—perhaps he’s a dream, too—evolve through their renditions of pre-1940 blues and bluesy Tin Pan Alley tunes.

The characters do not have names. They do have types. And, because the blues trades on the elemental, stereotypes. The redoubtable Felicia P. Fields plays the bigger-than-life but washed-up blues mama. Fields has the only few spoken lines in the show, most of which concern her memories of stardom. It’s hard to feel Fields’ star is faded when she delivers “The Blues is a Woman” or sings the “Take Me For a Buggy Ride,” one of those blues songs that rolls with bawdy double meanings. And her moves on “Buggy” are a fine reminder of how much bump-and-grind there is in equestrian pastimes. That rarity, a 1920s Grant and Wilson song—by a couple that produced a trunkful of sexy comedy tunes—has strong Chicago roots and was a staple of African American performers who took blues and jazz abroad.

Another fine singer, Donica Lynn, as the African American chanteuse with a Paris past who drinks cheap hooch out of a cognac bottle, puts her character so fully into some warhorse standards that they bloom nearly all new. Her “Lush Life” aches so painfully it’s a wonder that the show gets on happier feet again. It does, at least until Clare Kennedy, as The Girl with Date, breaks hearts again with a devastatingly sad, beautiful “Willow Weep for Me.” “The Girl” is a powerhouse babydoll blonde with legit pipes trying to rebound on the South Side. The three women are a formidable ensemble, too. Their swinging trios, especially when they bring tight harmonies, rock the smallish Ruth Page theater. Kudos to the men in the show, too, including a stompin’ jazzy band rare in musicals. And also to Evan Tyrone Martin as the sleazy, charming and greasily coiffed crooner and to Terrell Armstrong whose balletic grace and jazz steps offer hope that men don’t just bring bumps, grinds, betrayal and grief.

Chicago’s been home to a slew of jukebox musicals that work to recreate songs in their original versions. Those show charm with familiarity. Here’s one that dusts off a couple dozen songs that will likely be new discoveries to most in the audience. It delivers them with fresh takes, by great performers and packages them in a show with atmosphere worth getting wrapped in.

“Blues in the Night” at Porchlight Music Theatre at the Ruth Page Center for the Performing Arts, 1016 North Dearborn, (773)777-9884, porchlightmusictheatre.org. Through March 20.