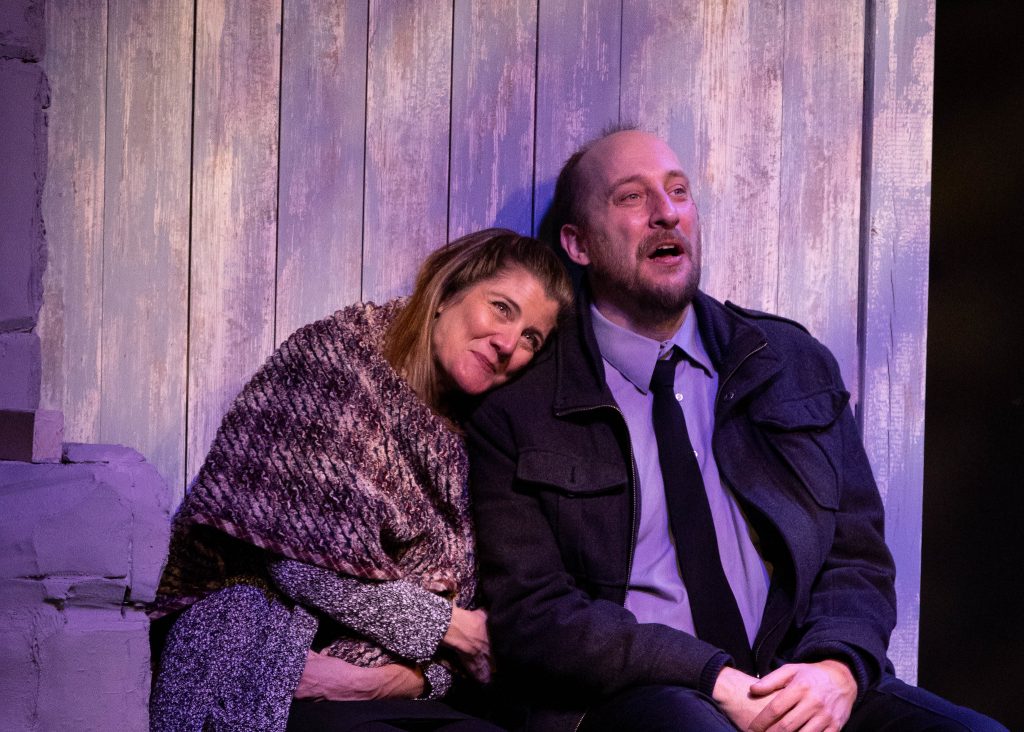 “Outside Mullingar” is a sweet little Irish valentine of a play, requiring a light touch to fully bring out its placid, low-key charm. And that’s just what director Beth Wolf and her seasoned four-person cast have brought to this revival of the 2014 work by celebrated playwright (“Doubt: A Parable”) and screenwriter (“Moonstruck”) John Patrick Shanley. It’s sentimental, yes, and as slow-moving as life itself in little Killucan, the rural hamlet where the drama is set. But as the plot wends its predictable way toward romantic resolution, one can’t help but root for the two lead characters as they open up like flowers, and haltingly move from fear and anger to joy and desire.

The play focuses on Anthony and Rosemary, forty-ish neighbors whose farms and personal histories are deeply enmeshed. The prideful, stubborn Rosemary has long carried a torch for the passive and sensitive Anthony. Although attracted to Rosemary, Anthony has always remained aloof, for reasons that emerge toward the end of this ninety-minute-long production, presented sans intermission. The angular Laura Leonardo Ownby is all forceful directness as Rosemary, in sharp contrast to the perpetual awkwardness of Ross Frawley’s Anthony, whose shyness and vulnerability are signaled by his hunched posture and sideways glances.

As the play begins, both characters live with their aging parents, Rosemary with her just-widowed, life-weary mother Aoife (Susan Hofflander), and Anthony with his sharp-edged father, Tony (Jack Hickey). Relations between the two families are not entirely harmonious, as Tony aggressively seeks to buy back a strip of land that he had sold decades ago to his neighbors. They refuse to sell, for reasons that cut deep into the heart and soul of all the characters. That conflict—plus old Tony’s reluctance to will the farm to his son, whom he believes lacks his own passion for husbandry—drives the play’s simple but satisfying storyline.

The pleasure here is at least as much in the journey as the destination, as Shanley’s outsize characters—who love conversation for its own sake—gab their way through scenes thick with droll anecdotes, ancient grudges, bristling confrontations and over-the-top drama, as well as the occasional touch of poetry. One of the characters is perched on the border between fey eccentricity and actual madness, which makes one wonder about the plausibility of a happy-ever-after ending. But what is never in doubt here is the pleasure of the interaction among characters who may lack formal education, but who overflow with feeling, humor and humanity. The moment when Anthony finally gets the paternal blessing he has hungered for all his life has an almost biblical quality of grace and reconciliation.

“Mullingar” is an actor’s play, and director Wolf wisely gives her cast all the room they need to inhabit these expansive, expressive roles. The play’s seven scenes—which stretch between 2008 and 2013—are long and emotionally demanding, but the actors heroically sustain both brio and brogue. All the well-cast performers shine, but it’s the chemistry between Frawley’s Anthony and Ownby’s Rosemary that stands out, as they demonstrate just how subtly erotic a long-simmering romance can be. Kudos to dialect coach Cate Gillespie for her work in helping the actors capture the mellifluous rhythm of Irish speech, and also to set designer Eric Luchen for his ingenious revolving props, which enable the wee Citadel set to hold two separate houses and four dramatic spaces.

“Outside Mullingar” isn’t a flawless play. The addition of a fifth character—such as Anthony’s American cousin, who is mentioned repeatedly but never seen—would air out the dramaturgy and spice up the occasionally draggy scenes. But the playwright’s intention isn’t to create a realistic, dimensional world on stage. Instead, he pulls us into a single magical, risk-taking moment, one that redeems a dreary past and makes possible a future worth living. At this point, we could all use such a flash of hope. (Hugh Iglarsh)