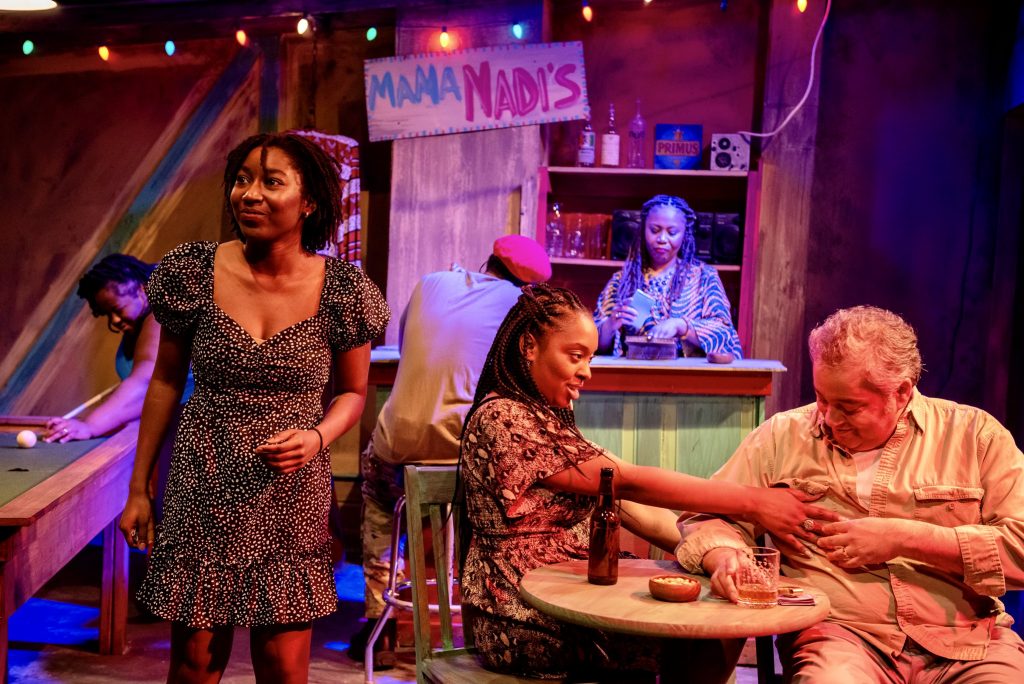 Lynn Nottage’s Pulitzer Prize-winning drama “Ruined” brings the vast horrors of the late-twentieth-century wars in the Democratic Republic of Congo into the bar and brothel of the tough, clever Mama Nadi. The bar sits on precariously neutral ground on the edge of a contested, genocidal killing zone.

A talking bird squawks one of the play’s first sentences, but no one present understands it. The bird’s previous owner taught it in the language of the local Pygmy clan. The clan was driven off its land by the DRC government and its people made homeless, or lifeless, first to make way for a national park and then for illegal, violently contentious coltan mining. The idea was to use the bird as a memory store for a doomed language. Though the meaning of the bird’s words are lost, the bird itself means plenty. The bar’s denizens protect it because it is a fragile repository of the banished people’s culture. Their kinship with the unintelligible bird comes in part because the humans, too, face their own incomprehensible decimation in the war zones. “Ruined” shows us how the destruction of the region’s body politic ruined the bodies and souls of those who suffered the wars. But the people in the bar are also the ones that give the bird and each other sanctuary and build each other’s resilience, even in the face of ruin.

Grasping the DRC’s size, and horrors, is challenging. The country is roughly four times the size of Texas and home to nearly one hundred million people. One stat that sticks in my mind from when I reported—from afar—on the wars there in the 1990s is that when its then-dictator Mobutu Sese Seko needed foreign help to prosecute what was in essence a world war in his country, he invited in the Ugandan army as mercenaries and paid them with the timber rights to forests about the size of the state of California. The country’s wars—which were in fact the wars of five countries—cost millions of lives. Estimates of the death tolls are controversial; they range between two million and 7.6 million. In world history, few conflicts have been deadlier.

The women workers and male customers are all on one side or another of the worst things humans do to each other. One pretty, but limping fifteen-year-old arrives after having been raped so often, and brutally, that her genitals are “ruined.” Instead of servicing the men as a prostitute, Mama Nadi has her clean tables and sing songs. Not so oddly, one of the terrible things, Mama Nadi’s proffering her “girls” in the brothel, protects the young, routinely abused prostitutes who live and work there from the far worse lethal and sexual savagery the women were subject to before they ended up there. Takeisha Yelton-Hunter, a relative newcomer to the professional stage, gives a strong, nuanced performance as the world-wise madam who keeps the wolfish commandos and their boy minions passive with beer and sex. Until she doesn’t.

The young prostitutes are played with courage and emotional daring by Jemima Charles, as the daughter of a murdered tribal chief; Courtney Gardner, as a farm wife whose rapes by an army platoon caused her family to abandon her; and Jenise Sheppard, who plays the “ruined” girl Sophie in whose lamenting, angry songs lay the anguish of all. Sophie’s uncle is Christian, a poetic trader of contraband. He brings Sophie to Mama Nadi for protection, a proposition Mama initially rejects but ultimately accepts when offered a box of Belgian chocolate (which Mama sorely misses) and learns Sophie can sing. As Christian, Stanley King finds his character’s tenuous balance of vulnerable and indomitable. In the end, he gives Mama Nadi the strength to endure a horror she’d been masking.

For all the trouble “Ruined” so powerfully captures, it also gives us the human capacity for tenderness in the face of anarchy and hellish violence. Is that an ending fitting a play about the human toll of Congo wars? The play, which Nottage originally workshopped at the Goodman Theatre in 2007, is based on the author’s reporting in Uganda among refugees from the conflicts. In their stories, she found the horrible and the good, and how, like the precious words of the bird in the bar, the remnants of the culture that are nearly lost for good, are the most dear of all. The Invictus Theatre Co.’s fine production, as relevant now as ever, is also a treasure to hold on to.