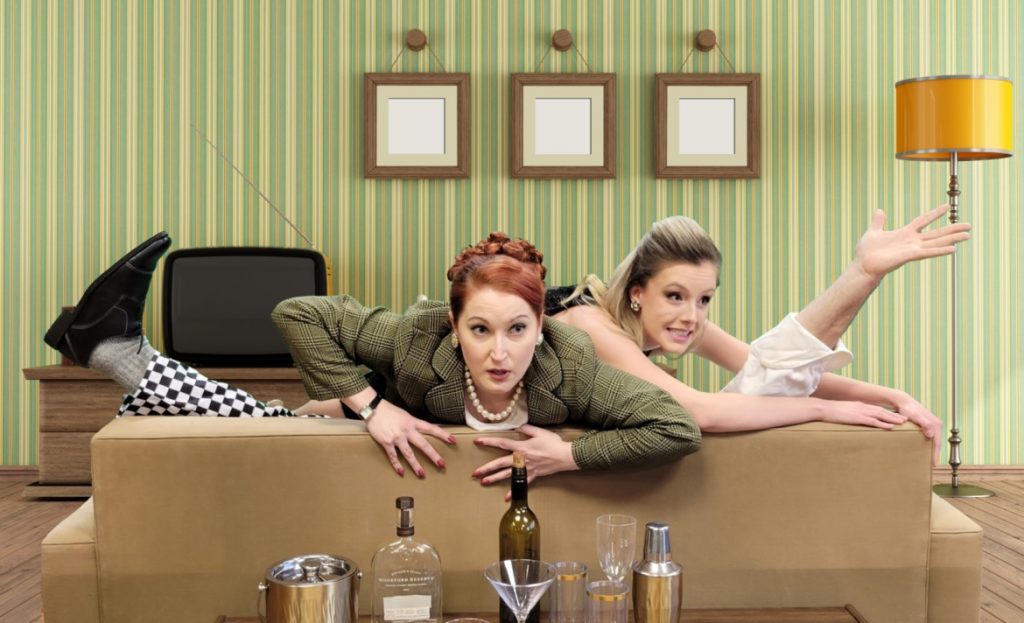 Although bawdy hijinks are the lifeblood of “Don’t Dress For Dinner,” BrightSide Theatre’s production from French farceur Marc Camoletti, the most sensual moment of the play isn’t one of the many secret embraces between lovers, but a quiet conversation between husband and wife at its end. The conversation occurs between Bernard (Adam Schulmerich) and Jacqueline (Stefanie Johnsen), characters that  appeared in Camoletti’s 1960 smash hit “Boeing-Boeing.” “Don’t Dress for Dinner” is the 1987 sequel that follows their new misadventures.

Bernard is on the edge of victory here: his affair with glamorous Parisian model Suzanne (Kaitlin Feely) has remained hidden, and the opportunity to sneak out and spend the night with her in the spare bedroom is just in reach. A similar opportunity waits for Jacqueline: She’s managed to keep secret her affair with Robert (David Moreland), Bernard’s best friend and another carryover from “Boeing-Boeing.” He’s in the second spare bedroom, and he’s a restless sleeper, nudge-nudge.

Yet as the couple cleans up before heading to bed, they share a rare moment of intimacy. “You know,” Bernard says, “I got a funny feeling this evening you quite fancied [Robert].” “Good lord, no,” Jacqueline says, chuckling, “He’s not my type.” Jacqueline points out she got a similar feeling between him and Suzanne. Not my type, he says. The way the actors play it, there’s a sense both of them know more than they let on. But they no longer need to know for certain. New appreciation has bloomed, free from jealousy, accepting they may always have secrets from each other. And that’s quite alright.

What makes this moment so special is not just that it reveals a romantic truth at the end (if not the heart) of the play, but it reflects how director Aaron Henrickson and the cast have been so attuned to human nuance while handling the material. There are few easy stereotypes in this version of “Don’t Dress for Dinner,” even at its most cartoonish—and relax, it’s without a doubt a hilariously cartoonish comedy, just with a touch more pathos than what is usually called for.

Bernard and Jacqueline are absurdly unfaithful to each other, yet they’re perfect sparring partners in love. Bernard is so self-sabotaging you wonder if he wants to be caught, and Jacqueline is well aware of his tricks—she didn’t win at the end of “Boeing-Boeing” for nothing. She most comes into her own when playfully squeezing Robert behind Bernard’s back, then later when she confirms Bernard’s mistress is in their house, and blood’s in the water. But she infuses the normally un-fun job of playing the dupe with a sly, quiet knowing. The play points out how hypocritical they are for being so jealous while they’re both cheating. What motivates the emotional leap from this point to the couple’s resolution is not the play’s focus, but the direction is still careful to make these moments stand out from the chaos. It’s a well-constructed farce, and anything more is extra.

While Bernard strides upright with a car salesman’s smile, Robert contrasts by bouncing and whipping and curling and… someone just check his bones for springs. He’s a human cartoon, yet grounds his extreme emotions and gestures in the moment. During an admittedly slow exposition scene, Bernard begs Robert’s help keeping his affair with Suzanne secret, explaining the farcical setup so far—the script considerately checks in on how we’re keeping up from time to time—and asks Robert to pretend Suzanne is his lover. Less thoughtful actors than Kaitlin Feely might play Suzanne as a sexed-up ditz then clock out for the day. Yet Kaitlin makes Suzanne self-aware, self-assured, and simply just more comfortable around the finer things in life. Less Derek Zoolander, more Persian cat.

Outside these liaisons and double-crosses are Suzette (Jocelyn Adamski), a Le Cordon Bleu-trained caterer pulled into Bernard and Robert’s schemes by accident, and her husband George (Alex Farrington), a cleaver-wielding BS detector. Suzette gives us a breath of fresh air by accepting the whole kerfuffle as a big game, figuratively and literally. She’s the underdog here, but is no sucker. She picks up Bernard and Robert’s tricks, masters them in record time, and proves to be their savior in the end—for the mere price of 200 francs per secret, merci beaucoup. The only sour note is that Suzette occasionally seems aware she’s trying to have a strong French accent, and so we are too.

“Don’t Dress for Dinner” is a hilarious ride, yet amidst the many, many stunts and gags, the direction and cast manage to imbue subtle touches of humanity into the madness.