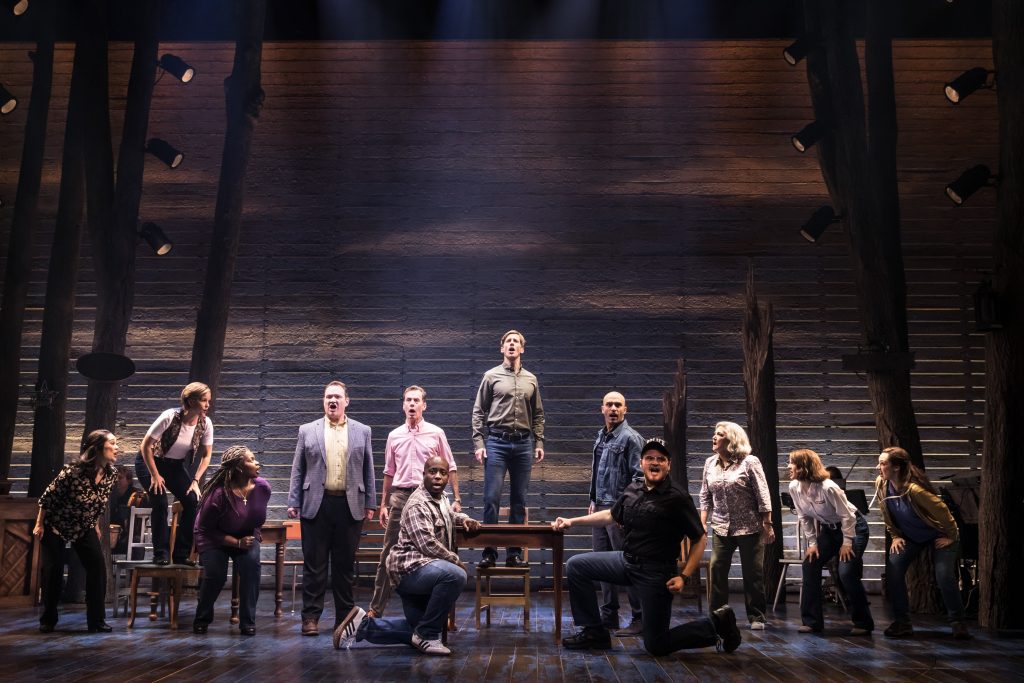 Organized chaos. That’s the best phrase to describe “Come From Away” in a way that doesn’t feel disparaging. A musical about 7,000 people crammed into a Newfoundland town, further crammed into just one-hundred minutes of stage time with a dozen cast members playing named characters and “others.” The show tries to condense a few fleeting days of histories, anecdotes and fear into a digestible package.

All at once, this show, which I have heard nothing but raves about since it premiered in 2015, took me completely by surprise. I didn’t cry when I saw the show, yet now my eyes are glassy as I try to explain it. So often when we talk about the tragedy of 9/11, we focus on the loss or the dedication of our first responders. It’s not often we talk about the regular people, let alone regular people who aren’t even New Yorkers, let alone American. As one character ponders, would we take a moment of silence in the middle of a busy shop in honor of a country that wasn’t ours? It feels irresponsible not to mention that Russia attacking Ukraine makes the messaging in “Come From Away” all the more potent: “Because we come from everywhere, we all come from away.”

Much like the show’s spirit, the cast of this production is an homage to togetherness. Whether actors are slipping seamlessly into different personas or creating a footbridge of chairs in the middle of “Stop the World,” “Come from Away” is very much a team effort. It is a demonstration of the triumph of the human spirit which, particularly now, holds a mirror up to us as if to say, “Why haven’t you all gotten here yet? It’s been twenty years.”

A simple scene set by Beowulf Boritt transports us to Gander, the small town we doubled by diverting planes from our airspace on 9/11, that could so easily be any one of our Midwestern towns. Hell, they even have a tradition of shooting back shots that make outsiders squirm—a little Malört anyone? Between the familiar warmth, joking manner, and charming accents I could swear I’m visiting my extended family of in-laws in Little Falls, Minnesota. Maybe that’s what makes this show so impossibly powerful.

That’s it. The characters onstage aren’t far-off Canadians we’ve never met, they’re a hodgepodge group of people we’ve known all our lives. A sweet, well-intentioned small-town mayor, the school staff always looking out for others, a local animal lover dedicated to her cause, and an array of regular people. We’re them. We’re those regular people. We don’t live on a rock out in the middle of the ocean, but we are a city that welcomes people from all corners of the world.

So let yourself get swept up in the chaos, the overlapping lyrics coming at you in thick Newfinese that all at once may thrill or confuse you. Embrace the love you see radiating across the stage. Remember that it doesn’t need to take a tragedy to unite us. Then take all those feelings, hold them close, and go back out into the world with a greater sense of human spirit—I know I did.