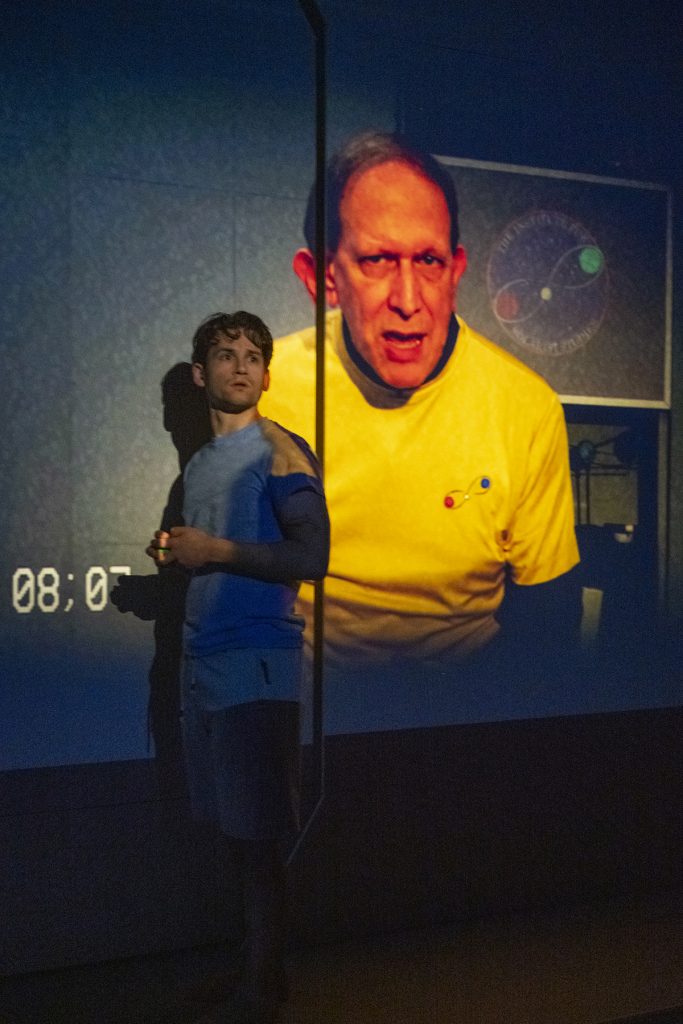 At one level, Stanislaw Lem’s 1961 novel “Solaris” is about hubris, depicting mankind’s quest to understand the incomprehensible–in this case, the alien planet of the title, a watery world that seems to possess awareness and will. And hubris may also apply to the small, non-Equity Griffin Theatre’s decision to stage the North American premiere of David Greig’s long, dense and demanding 2019 adaptation of Lem’s work. But without big names or budget, director Scott Weinstein and his all-in cast have delivered a taut, smart production that succeeds dramatically, visually and thematically. For those familiar only with cinematic versions of the story–including Andrei Tarkovsky’s 1972 film–this compressed, intimate take on Lem’s novel will be a revelation.

The setting is a space station in orbit around Solaris, a mysterious orb that circles two suns. Its ocean-covered surface presents a hypnotic display of organic shapes and patterns that changes colors daily, reflecting the living planet’s shifting moods. In contrast to the glowing, undulating energy of Solaris–suggested by the pulsating video projections of Yeaji Kim–is the cramped, antiseptic environment of the space station. It’s designed by Joe Schermoly as a series of movable panels that allow the compact stage to contain multiple public and private spaces, all of which are lit to a flat, office-like brightness by Brandon Wardell.

To this distant, dreary outpost comes Dr. Kelvin, a psychologist sent to check on the crew, who have been out of contact with Earth for months. She quickly finds that the mission chief, her former teacher Gibarian, has recently died, leaving behind only a video record of himself. His two fellow astronauts–biologist Sartorius and computer specialist Snow–are alive, but behaving strangely. Kelvin discovers why: Solaris, described as “a giant ball of consciousness,” has become aware of the earthlings’ existence and has made contact with them in the form of magically appearing “visitors” that exactly replicate people from their past. Kelvin herself wakes up to find herself in bed with her old flame Ray, who died years before, leaving Kelvin to deal with unresolved feelings of guilt, longing and regret. Haunted emotionally by her dead lover, the psychologist finds herself haunted literally as well. Ray is a gift from Solaris, a facsimile human crafted for reasons unknown out of Kelvin’s dreams and memories.

Over the course of its two-and-a-half hours (including an intermission), “Solaris” takes us on a mind-bending philosophical and spiritual journey, probing into the nature of reality and identity. While there isn’t much conventional action, the four human characters reveal themselves fully by the end, as the virtual visitors force them to revisit their pasts and confront their own subconscious minds.

Everyone reacts differently to the eerie power of Solaris, and the cast members skillfully capture the crew’s range of responses. Nicole Laurenzi is tight-lipped and closed-off as Sartorius, who has suffered a tragedy that has left her embittered and angry at life. She warns the newcomer, Kelvin, that the visions she will see are “seductive but not real.” The warning goes unheeded as Kelvin—played with vibrating intensity by Isa Arciniegas—throws herself recklessly into this opportunity for a second chance at love. Crewman Snow, played with warmth and wit by TJ Thomas, stands between the other two, interested in the visitors as scientific phenomena, but able to retain his scholar’s detachment. The onscreen character of Dr. Gibarian finds poetry and hope in Solaris; in Larry Baldacci’s open-hearted portrayal, Gibarian is as much saint as scientist. The most gripping performance is that of John Drea as the eerily childlike Ray, a water spirit who feels increasingly uneasy in his solid, skin-covered body. One other visitor—a small, enigmatically silent child played alternately by Alexandrya Salazar and Kajsa Allen–completes the ensemble.

The script has its flaws: the dialogue could do with fewer f-bombs and more professorial manner, and the vision of the future is muddled, combining as it does galaxy-spanning spacecraft and CD-playing boomboxes. But in the best tradition of literary sci-fi, the work succeeds in connecting us not just with alien worlds, but with unexplored aspects of ourselves. We identify with the adult characters, all of whom struggle with loneliness and loss, in contrast to the godlike perfection and self-containment of Solaris.

More existential parable than space opera, this play leads us to ponder just what it means to be human. In the end, Solaris, like the theater, is no more and no less than a mirror of the soul.