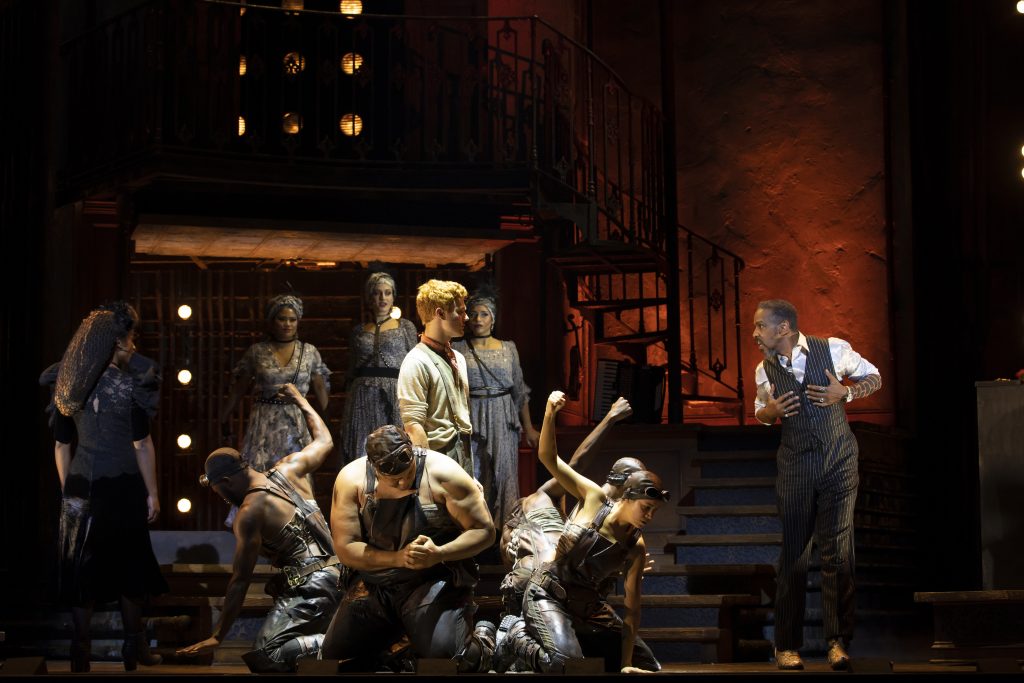 The Orpheus myth is as old as Western civilization itself. Plato has characters debating it in his “Symposium.” From Virgil and Ovid to Rilke and Tennessee Williams, authors of all eras have had their spin.

Given that Orpheus was said to charm beasts and even stones with his music, attempts to musicalize the saga have also permeated the ages. In the case of Monteverdi and Gluck, their settings are among our oldest surviving operas.

What we haven’t had until recently is “Orpheus: The Musical,” aka “Hadestown.”

Vermont singer-songwriter Anaïs Mitchell, wrote the music, lyrics and book and put on the first version of “Hadestown” in 2006. Developing it into a “folk opera,” Mitchell released a concept album in 2010. Director Rachel Chavkin came on board in 2012 and helped reconfigure the show before Off-Broadway, Canadian and London runs that preceded “Hadestown” on Broadway in 2019. Eight Tony Awards later and after a year-and-a-half shutdown, the show reopened last fall and a long-delayed national tour began last Wednesday at the CIBC Theatre.

The Orpheus narrative is compelling enough that any musical version was likely to have some degree of traction. That said, what Mitchell has concocted is something remarkable that offers a refreshing take and modern-day experience of this familiar tale, revealed as contemporary and relevant as ever.

True to Greek drama tradition, the action is stylized and we are always aware we are watching a play. The god Hermes (Levi Kreis) is our guide, calling out to us directly before launching into the revival-like gospel opening “Road to Hell,” in case there is any doubt about where we’re heading.

An eclectic ensemble of violin, cello, guitar, piano, bass and drums, often augmented by accordion and propelled by trombone is the accompaniment while the Three Fates punctuate in Andrews Sisters-like harmony. The default music setting is folk but there are touches of Appalachian, bluegrass, dixieland, zydeco, gospel, swing and blues.

A sonic innovation is that Orpheus (Nicholas Barasch) is a guitar-strumming tenor who can switch into a virtuosic upper voice. His recitative, or narrative-sung sections, keep a normal range but when he shifts into the song mode as part of the action, he heads up into the vocal stratosphere. It is an impressive effect and never showed strain or wear.

On the opposite end of the spectrum, Hades (Kevyn Morrow) normally sings with a bass voice as might be expected for the lord of the dead and the king of the underworld. But when shifting into song, Hades can mysteriously drop down into an otherworldly basso profundo range.

A huge asset of “Hadestown” is that Orpheus and Eurydice (Morgan Siobhan Greene) come off as a young, naive and adorable couple very much in love. That makes us feel Eurydice’s death through Orpheus’ loss more deeply as well as his desperation to fetch her from the underworld.

Hades will need to be charmed along the way by Orpheus’ music, but Orpheus has an inside track after befriending Hades’ consort Persephone (Kimberly Marable) during her six-month spring and summer sojourn. Thus, Orpheus’ song mirrors the love Hades and Persephone once had for each other, a clever take.

The tragic end we all know, but it is no less cathartic. Hermes, messenger to the gods, has a message for us as well, about our attraction to archetypes as a coping mechanism through the ages.