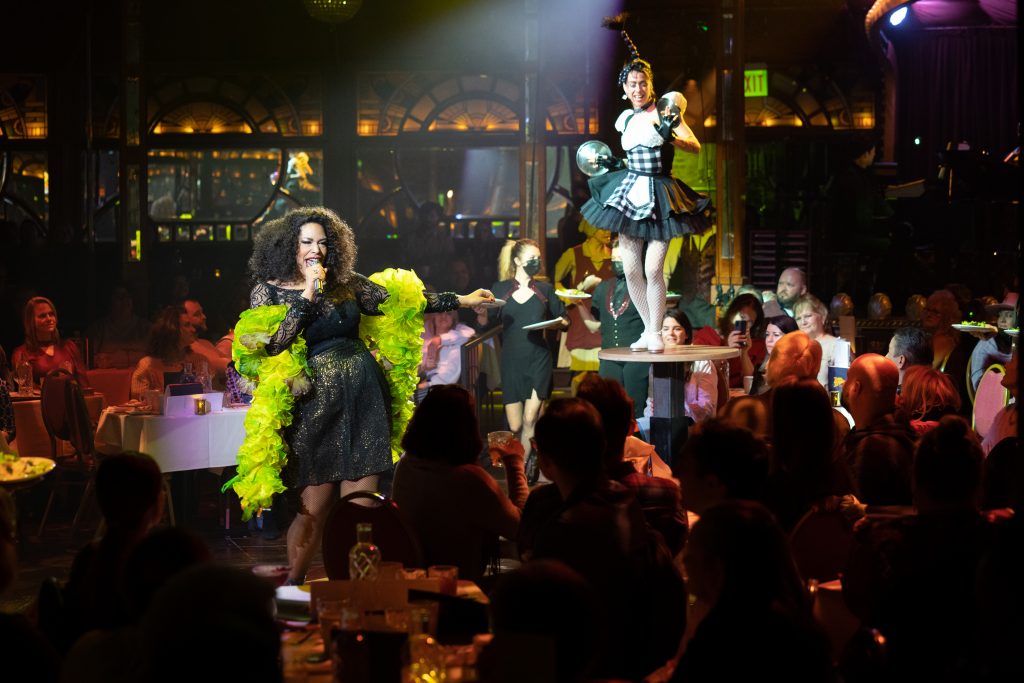 When the superlative, lively band backing the cast of “Teatro ZinZanni” offers its opening notes, the playful lunacy in the dinner cabaret is already stirring. And it’s stirring! Not only is the compact combo, under the lively direction of Kevin Disch, filled with great players, it reconfigures everything from classic rock to classical opera with just the right amount of musical smirk. The long-running, ever-changing show is, after all, a cirque du smirque that mixes song, comedy and acrobatics. And matches it with supper and an impressive wine list. Speaking of stirring, some bottles cost nearly $500. That’s understandable, given that the show is a destination for people celebrating special occasions. The crowd is part of the show and part of the fun. On a recent cold Wednesday evening, many were having their first night out in a theater, and their first night in lamé and sequins, in two years. The venue, a lavishly decorated old Masonic Hall, is suited to the (very loose) dream-maker theme of the current show.

In the first big numbers of the show, Jeff Award-winner Bethany Thomas brings down the house with not just any “Gopher Mambo,” but the bajeebers Yma Sumac version that crosses four and a half octaves. Thomas may have stretched it to five! Or ten! I may not have heard them all. I may have been distracted by the speed-tempo juggling of Noel Aguilar creating a tornado of pins centerstage. Until recently, Aguilar, who hails from a renowned Mexican circus family, was waiting out a pandemic lull serving tables at a Florida restaurant. Later in the Teatro show, he offers a taste of the kind of waiter he could have been had his Florida boss let him play more with plates. As always at Teatro shows, the meals come to the tables with hijinks.

The evening’s emcee, the tall brickhouse of waitress sass named Doily–played by the quick-witted, affectionately ribald Kevin Kent–is in charge of the night’s running gags. She cajoles audience members—mostly hapless men—to do her bidding and has a knack for improvising her bits to suit her prey. The emcee duties are shared by the less jokey, more dashing Cunio, a man with a shaved head, eyeliner, superhero physique and another versatile powerhouse voice. Cunio can sing a rock anthem while upside down on an aerial rope and also take the mezzo-soprano part on the Delibes Lakmé duet accompanying Bethany Thomas as soprano.

The show is full of derring-do. The mix of acts is standard fare for circus cabarets, but the rope, ribbon, ring and juggling routines are fresh and graceful. The fact that they are at such close quarters to the audience ups the thrills. The acrobats have world-class stage credits, including Cirque du Soleil and Broadway. Michael Evolution, from Amsterdam with a basketball, is a one-man Harlem (Haarlem?) Globetrotter. Contorting clown Marjorie Nantel adapts the bathtub act she performed for Queen Elizabeth. Watch for the sock puppet. Two moments of pure grace come from the ceiling, first in the trapeze-plus-contortion act of the couple known as Duo Rose and next in an aerial hoop ballet by Elena Gatilova. And yes, mature adults can do such things. Take that, Olympics coaches from certain places.

By the way, there are also affordable bottles of wine and the waitstaff, performers in their own right, are kind and never pushy. Teatro ZinZani is a show of laughter, awe and joy. At one moment the audience is coaxed into dancing and at the end, into a kiss.