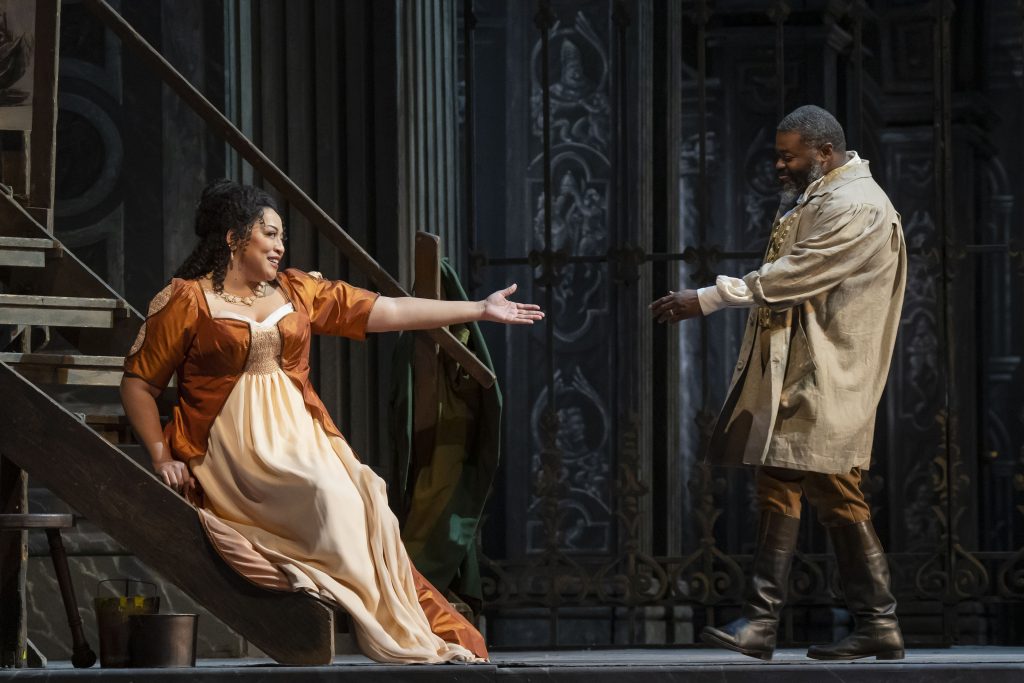 Although Puccini’s “Tosca” is the most-performed opera in Lyric Opera’s near-seventy-year history, there are significant firsts about the company’s production that opened Saturday night.

A Tosca and a Cavaradossi that are both Black artists is quite a lovely change. And these magnificent artists’ vocal and dramatic moments together and during signature arias made for the most thrilling “Tosca” experienced at Lyric in decades. From tenor Russell Thomas’ radiant “Recondita armonia” at the start of the opera to soprano Michelle Bradley’s offstage vocal entrance in her debut in the title role, their energy was palpable, their couple chemistry throughout the evening extraordinary.

No less seismic was that there was a woman in the pit, South Korean conductor Eun Sun Kim in her pandemic-delayed debut. (She began her first-ever music directorship last fall at the San Francisco Opera.) Kim’s young career has been garnering a reputation and happily, this was one of the most significant conductor debuts in Lyric’s history. It wasn’t just that Kim conducted the Lyric Opera Orchestra with precision and nuance with remarkable attention to detail and color, but she is a master dramatist who knows how to skillfully build up and release tension. A Lyric Opera spokesman told me Kim did the vocal coaching for this production and it showed. It is difficult to remember the last time that all of the musical elements of a Lyric production came together so seamlessly and powerfully.

Of course, in many ways “Tosca” is Scarpia’s opera, and Argentine baritone Fabián Veloz—making his Lyric debut—did not disappoint. This is a more suave Scarpia than we are used to, which intensifies the drama. Scarpia is the villain of the piece, to be sure, but is most effective when he can exude charm and charisma with his sadism. His Act I “Credo” alongside the Lyric Opera Chorus’ beautifully sung “Te Deum” was a brilliantly underplayed bit of blasphemy, his cat-and-mouse pursuit of Tosca in Act II so chilling to the bone that in a #metoo era, his death was actually applauded aloud as if the opera house were a sports arena. To put an imprimatur on the effectiveness of his performance, Veloz’s curtain call was greeted with boos and hisses. Bradley’s Tosca, for her part, sang a heart-wrenching “Vissi d’arte” when faced with Scarpia’s cruel choice.

This is a sumptuous and traditional production of “Tosca” visually, a reminder of what an opulent art form opera was in the days when every inch of a cavernous stage would be filled with a three-dimensional, captivating set, in this case designed by Jean-Pierre Ponnelle. The evening began with the Lyric Opera Chorus offering a heartfelt rendition of the Ukrainian National Anthem.