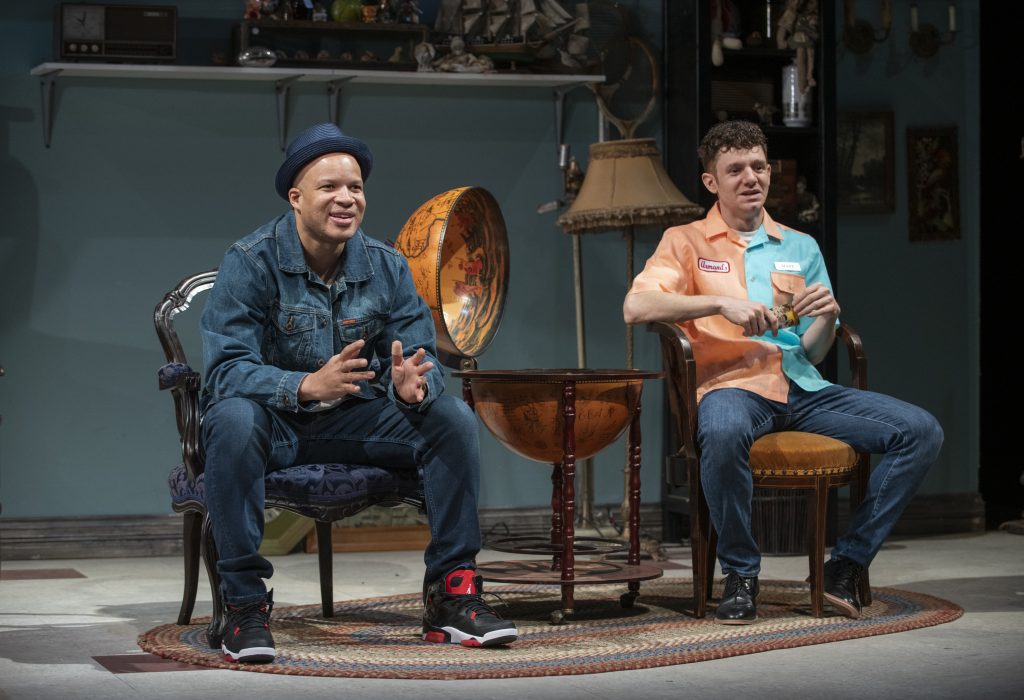 La Cave Du Vin, the failing Cleveland wine bar run by Matt, is home to neatly stacked, under-poured bottles of bougie wine. All alone, Matt kills time tidying up the already spotless room. When “King James” opens, it appears Matt’s only customers and friends are imaginary. In a bored moment, he wads up some trash and shoots at a wringer bucket. He misses his shots but playfully trash-talks his phantom fellow players all the same. All but the first few minutes of the show are about Matt’s soon-to-bloom friendship with the equally friendless Shawn, but in these first few minutes we see how much friendship means, even to a young man in solitude. When friends are absent, we make them up. We’re social beings who need others to survive. Evolution may have selected us to feel the pain of loneliness as a signal to go get friends. Or, with no other options, to make them up.

Fortunately, evolution also yielded pro sports to give men something to bond over.

Matt, who’s white and is often an annoying noodge, may not have friends yet, but he does have pairs of tickets to sell to the last nineteen basketball games of the Cleveland Cavaliers’ first season with LeBron James. The Ohio-born basketball great was a sensation and the pride of Cleveland from day one. Shawn, who’s Black and phlegmatic, hears about the tickets and comes to the bar to deal. The two jockey over price, beginning the conversational one-on-one contests that run over the next twelve years. Matt talks up the value of LeBron’s “only rookie season,” and Shawn presses to find Matt’s vulnerability by digging into the reasons for the sale. It turns out Matt’s father, who used to take him to games, is infirm, and Matt is steeped in debt. His father lets him sell the tickets to raise money and Matt hurries to do so. Shawn, who has just made his first sale of a short story, only has the $2,000 he earned.

Though they aren’t friends yet, in the negotiations, the two trade the sorts of details good friends share. Indeed the conversation, perhaps because it’s their most competitive, may be their most substantive of all. Every time the conversation and the negotiation seem to end, either Matt or Shawn challenges the other with a question to keep the irresistible game going. It’s the “let’s make it two out of three” that extends game play that’s otherwise over. Shawn gets his bargain price. On the way out, Matt asks Shawn who he will take to the games. Shawn has no one, except his new friend. They go together. For years. That is, until the news hits that LeBron will leave Cleveland and its unpromising team and move to powerhouse Miami where championships are nearly (and would be) a sure thing. LeBron’s decision isn’t the only threat to the friendship, but it reveals how much of the content of the two men’s friendship rests on sports, and on the idea that LeBron was also somehow a compadre, but was in fact an imaginary, but useful, friend. He gave the pair something they could talk about passionately, when the substantive issues in their lives were too raw to tackle, or talk about, together. Even so, the two men do find ways to give each other practical help, just not to ask for it.

“King James,” deftly written by Steppenwolf ensemble member Rajiv Joseph, is divided into four quarters filled with crisp, smart dialog. It’s a play with no wasted lines, and the subtlest exposition. The most brilliant part of the work, however, may be in how it matches that liveliness with characters who change little. It is a fascinating exploration of lives and a friendship that ends in a tie, pretty much in the state in which it started. At the same time, it is a play about the lives of men. It plumbs what’s touching even in the seemingly shallow. And thankfully, it’s a rare modern work about men that doesn’t trade on showing toxic masculinity, violent competition or capitalist sins. Other nights in the theater offer plenty of dramatic tension in those familiar wells. The tension here is whether the friendship can make it, given the confines of male emotional expression, and we root for both men and their relationship. If a play is to have only two actors, Glenn Davis and Chris Perfetti are two to choose. Both inhabit their characters so naturally in body and word that their small tics define them as much as their lines. Physically they convey to the audience what emotion they as characters often miss in each other, or the emotions they do catch but skirt while turning to another topic in sports. LeBron James ultimately returns to play for Cleveland and is central to a Cavaliers’ championship. I’m hoping playwright Joseph pens sequels that follow the two men into James’ retirement, and perhaps into their period of late-life nostalgia… after they have decamped for Miami. Based on this winning play, a three-peat seems possible. Shoot, there I go, talking sports.