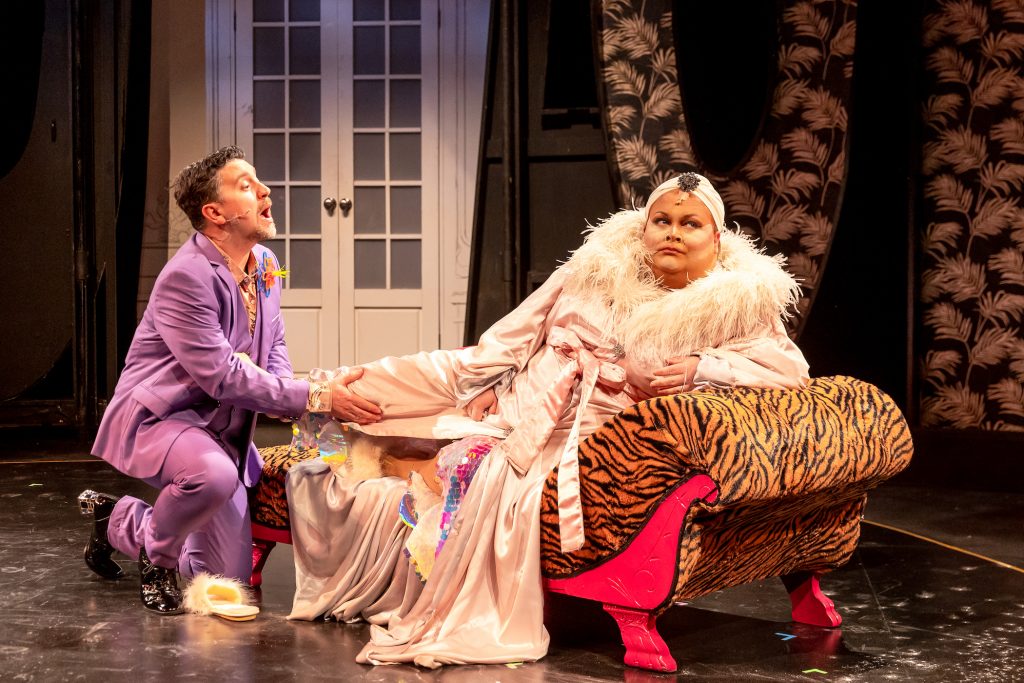 When Music Theater Works announced it would be doing its first-ever production of “La Cage Aux Folles,” anticipation was high.

Across the company’s forty-two-year history, beginning as Light Opera Works, this was where you could count on seeing Broadway musicals with trained singers and all of the trimmings, including a full orchestra.

Signature Jerry Herman shows such as “Hello, Dolly!” and “Mame” were given that full-boat treatment and “La Cage” presented that way would reveal that despite what has often been considered controversial subject matter, it was every bit as fine a score as those works.

Well, not this time.

Arriving at the North Shore Center for the Performing Arts last Sunday, where only last November Music Theater Works had presented a spectacular epic revival of “Ragtime,” I started for the theater as usual from the lobby when an usher redirected me to a smaller theater within the complex that I didn’t know existed. It even had its own lobby where, in this case, one of the performers in drag flattered you from inside a cage. Folks were even stepping in for photos. The intimate theater inside was set up with a few tables in front and the general feel was as if you were attending a truncated version of a nightclub which after all, is the setting for much of “La Cage.”

When the overture began from behind the stage, it was immediately obvious there was no orchestra, only a typical post-millennium pit band of a handful of players. Yes, they do a good job of evoking the original score, which did include an orchestra, including a concertina. And no, a synthesized concertina is not the same.

The advantage of such intimacy is that you have the feeling of being at “La Cage Aux Folles,” albeit over-amplified for the size of the space. The size of the chorus is small, the stage only large enough to display “La Cage” in all caps.

Taken as a whole, this is an enjoyable production with a good cast of show voices who are better dancers than singers.

However, what is extraordinary and memorable is a stellar performance by Ginger Minj as Albin, who gives this role a distinctive stamp. This is a role usually played for camp, almost as if the performer has their tongue in cheek throughout. The one exception is the Act I finale of “I Am What I Am,” when Albin shows his true self.

In Minj’s refreshing portrayal, Albin is authentic throughout. Zaza in this portrayal is largely done for laughs, but here we laugh with Zaza, not at Zaza. Minj interacts with the audience and goes off script hysterically. You actually experience Albin’s maternal nature which makes the premise that Albin is the real mother in the show so much more powerful and meaningful. Minj is also a superb singer who actually has the real vocal range this character usually fakes. And in that powerful Act I finale, Minj brought the house down. It was powerful and poignant, including real tears. Bravo.

Let’s bring Minj back in this role ASAP but next time, let’s have the backing of a full orchestra for the best of the best of times.