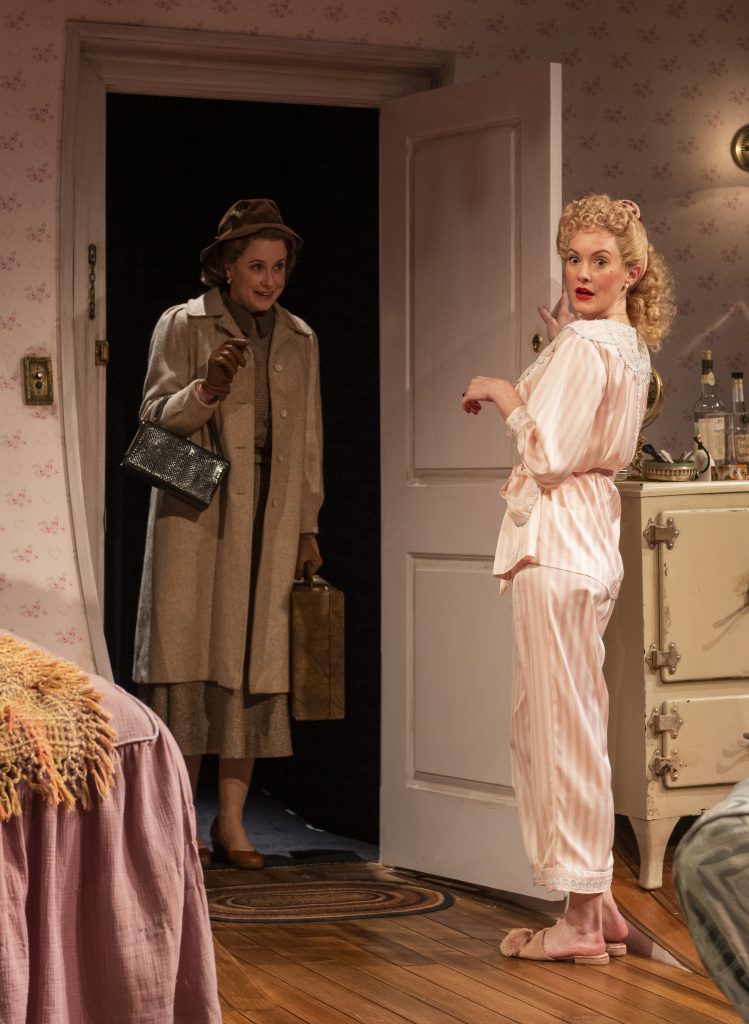 Not to be cheeky, but the man who was snoring from the top of the show through to the end, accompanied by the number of men I saw dozing off, were indicative of the fact that this play isn’t supposed to be about them. “Death of a Salesman,” the Arthur Miller play that demonstrates once again the playwright’s inability to write a compelling female character, was the play that several men in attendance seemed to want to be at.

It must be hard not to relate to the characters you see on stage. Welcome to our club.

Eleanor Burgess’ world premiere “Wife of a Salesman” isn’t technically a two-hander, but it is. Placing The Wife (Kate Fry) and The Mistress (Amanda Drinkall) in an uncomfortably small studio apartment to work out their issues with one another, this work encapsulates the utter nonsense women continue to face on stage as well as in life. Miller may have practiced the art of the Madonna/Whore complex ad nauseam, but Burgess’ play perfects it in a way that is authentic. These characters are, in no uncertain terms, the two women in Willy Loman’s life before the period of Miller’s play. It’s only when they confront each other that we realize Loman’s downfall predated his last twenty-four hours long before they occurred.

Here’s the thing about this play: it takes its time. It could be faster, that’s true. But by the same token, “Death of a Salesman” could also get cut to match this production’s hundred-minute runtime and not lose a great deal. “Wife of a Salesman” is so full of cogent points about being a woman that are as relevant now as they were in the show’s 1950s setting. No matter where a woman sits on the Madonna/Whore Complex scale, our development in the so-called traditional theatrical canon is appalling. While Miller’s original work is not the worst thing one could see, it’s also a thematic relic that doesn’t need to be rehashed every time an actor comes of age.

(No shade to Brian Dennehy who was the best Willy Loman. Bar none.)

Fry and Drinkall’s characters, who begin the show with almost mannequin-esque reactions, further mold into more-developed women by the final curtain. Together, their depth in embracing these tropes is so fascinating that the radio popping in and out of scenes can be jarring in the very best way. Given Burgess’ script and Jo Bonney’s steady direction, Fry especially shines as she takes Miller’s Linda Loman (sorry, copyright laws. “The Wife”) and transforms her into an actual person. Women that are merely footnotes in Willy Loman’s life become flesh-and-blood characters that are impossible to ignore.

It’s okay if a show isn’t for everyone. Full disclosure—in case it isn’t obvious by now—”Death of a Salesman” is one of those plays that can be masterfully acted that leaves me wondering, “Why do I care about this man?” But that play was not intended for me. Just as this play is not intended for ninety-two percent of the straight men who will see it. Do your partner, sister, mother, grandmother, insert-female-in-your-life-here a favor and get her a ticket to this show. Straight men might not appreciate the nuances or deadpan humor of Burgess’ creation, though I can all but guarantee the women in your life will.