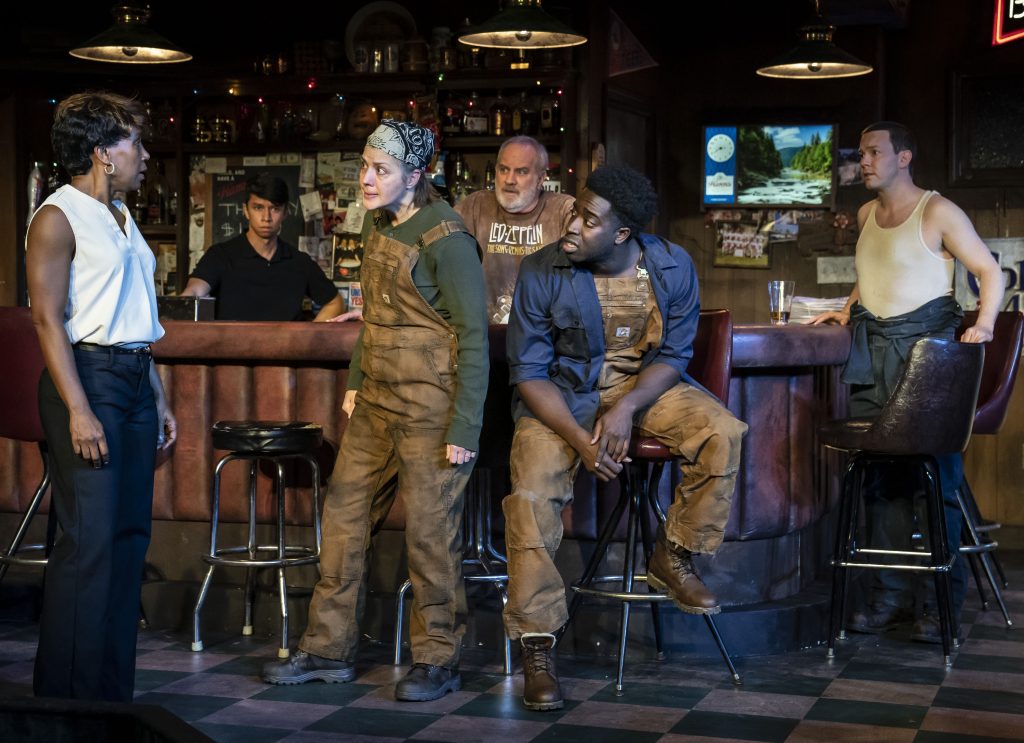 At the midpoint of “Sweat,” we’re on the brink of violence. An embittered young factory worker, Jason (Gage Wallace), gets right in face of the Colombian-American barback, Oscar (Jordan Anthony Arredondo), as he is leaving the local bar. Oscar has taken a temp job at a local factory in Reading, Pennsylvania, where the former workers, including Jason, have been locked out because of a union dispute. The factory is squeezing workers for sixty-percent pay cuts, plus concessions on their benefits, plus more working hours. Since no one wants to take that deal, it leaves room for temps like Oscar to get in and make a buck. Because he has crossed the picket line, he’s a pariah—a “scab”—with a target on his back.

Zooming out to a higher perspective, Oscar, in reality, works for the factory, but only barely: a few hours in the morning at less than half the former workers’ pay. But it’s three bucks more than what Oscar makes as a barback, plus hope for a full shift down the line, maybe. Besides, what has anyone in this town ever done to win his sympathy? He grew up here same as everyone but he’s still invisible—throughout the play we see him wipe down tables in one of the many scenes where workers like Tracey (Linda Gillum), Cynthia (Shariba Rivers) and Jessie (Tiffany Bedwell) pine for the old days. Days when their parents could work the line and earn a pension, retire comfortably, and know that people like Oscar were kept out. When you see Oscar hauling crates during any of their scenes, it’s a reminder that someone’s always getting their hands dirtier than you.

But to Jason, Oscar is just another Mexican (even though he’s Colombian) invading his country (even though he was born in Reading) and trying to take his hard-earned money (even though he makes far less than Jason ever did). From the outside, it’s an absurd narrative. Yet we’re never allowed to sit back and judge him. With the factory closed, his job, and consequently his entire future is gone. Even when he’s reminded that the factory bosses are the real villains, all of that is too remote and intangible. When audio from 2000-era news media plays between scenes, it reinforces just how isolated the people of Reading are from those who make or break their lives. In Jason’s mind, believing a racist myth that Oscar is part of some larger conspiracy to replace him is less painful than accepting the truth that he and his loved ones may never have mattered at all. Despite scoffing at the factory white hats at every chance, the truth is, they fully trusted them to hold up their end of an unspoken agreement. That was a lie. Unable to hold onto that pain, Jason needs someone he can punish.

Jason is begged by his best friend Chris (Emmanuel K. Jackson) and the bartender Stan (Randy Steinmeyer) to let Oscar go. Jason seems to want to. But he can’t. “I don’t know why,” he says, “but I can’t let him walk out of here.”

This may all seem very lyrical for just one moment, but I promise you that Lynn Nottage’s script really does hold that much empathy for such opposing characters, and the actors’ performances really do make that subtext sing. “Sweat” fulfills the promises of naturalistic theater to see human beings as they are, not how writers or amateur public moral philosophers would like them to be. And “Sweat” has not a judgmental syllable for any of its characters, equally tender as they are rough-edged. The strong and sensitive performances by the entire cast embrace those sharp contrasts and challenge the audience’s sympathies.

The criticisms of the production itself are minor and few. The second act is on a whole other gear from the first, the staging of which occasionally gets stuck at the bar. Stepping out from the play itself, however, this reviewer couldn’t help but feel distracted by its context at Paramount Theatre. This production of “Sweat” is part of Paramount’s BOLD initiative, which aims to stage “fearless, unexpected and thought provoking” work in their intimate, newly renovated, and 165-seat Copley Theatre. And $74 per ticket ($84 if you want to buy online) makes every one of those seats count. The play is undeniably fearless and thought-provoking, but if you want to see a play about how the industrial working class is reduced to counting nickels for beer, it’s a shame that Paramount’s accessibility couldn’t be more, well, BOLD.

“Sweat” is a work of rare and necessary empathy as it portrays those who live on the brink of economic disaster. It challenges the audience to see past its characters’ coarse exteriors and into what gives them hope and breaks their hearts as they fight for survival.