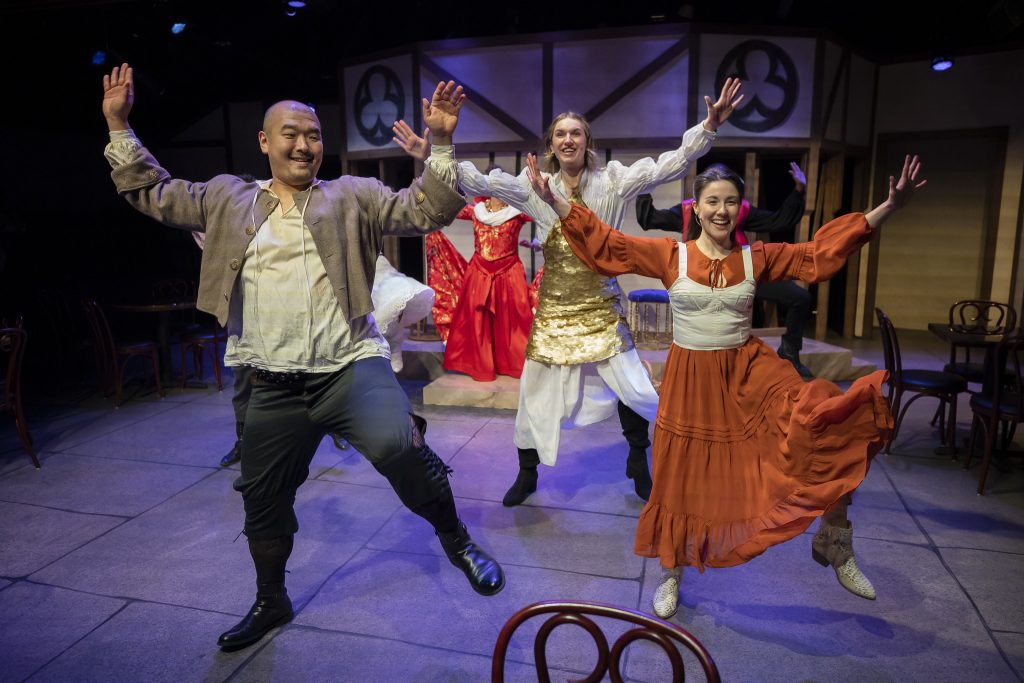 One of the chief thrills of a Theo Ubique musical is that the company brings implausibly large productions into its intimate cabaret space. Another thrill is that the company routinely fills its shows with stellar musical talent. That magic works in the new and reimagined production of “Once Upon A Mattress,” the light-as-a-feather-pillow fairy tale sendup with music by Mary Rodgers (daughter of composer Richard and mother of composer Adam Guettel) and lyrics by Marshall Barer. “OUAM” is the frilliest warhorse in the Broadway canon. The show has long been indispensable as a family-friendly show for school and theater camp—and campy theater—productions, perhaps because it can fill the stage with young players and community thespians for whom no level of over-acting is overdoing it. Indeed, the musical was born at a socialist adult theater camp in the Poconos (who knew?) where Rodgers wrote a short version that was later stretched to a full show.

The show draws on the familiarity of Hans Christian Andersen’s “Princess and the Pea” but inverts, somewhat, the original story’s nauseating fetishization of royalty. Instead we get a celebration of human character and the charms of oddballs. Rodgers, who also contributed to “Free to Be You and Me” and who penned “Freaky Friday,” was a prolific and gifted inverter of traditional class and gender privilege. When the musical opened in New York in 1959, it offered a young Carol Burnett a breakout role as the uncouth, swamp-swimming Princess Winnifred the Woebegone, and gave the star what became one of her signature belty comic songs, “Shy.” It’s an anthem to the inversion of gender and personality types. Sonia Goldberg, as this production’s princess, gives her own marvelously punchy, vocally superb take on the song.

The Theo Ubique production takes the subversion of types several levels up. Nearly every element is stunningly costumed in lace and bows. By my count, only one or two characters out of a cast of thirteen stuck to their traditional fairytale types, with the rest comfortably inhabiting places along the continuum of gender and sexuality. Director Landreee Fleming keeps the comic momentum on high and music director Jeremy Ramey matches with lively, uncannily full orchestration from the five-piece band. Standouts in the strong cast include lanky and adorable Andrew Fortman, who expertly mimes his way as sweet King Sextimus, the subject of a spell of silence. Jasmine Lacy Young, as the troubadour narrator called Poet, and Michael Metcalf, as the court’s knight and resident honey-toned baritone also splendidly anchor and unmoor the action as needed.

One of the few enduring challenges of the small house with ringside tables is that the choreography, some of it pulling in the full ensemble, is hard to take in from the closest seats and in the big dance numbers, the show felt a little dizzying. It likely felt less so just a row or two back, and ticket buyers may decide the marginal difference in distance is worth choosing.

As light as the show is, this production faces the inevitable contradictions that come from scrambling types in a show that originally turns on inverting types. It may be too much to expect real dramatic tension in a frilly musical, but it helps to have some stakes. This show, born in socialist camp, certainly started out with some subversion in mind. But when everything is topsy-turvy, there is little left at the show’s core to subvert to the rest. Perhaps only old-school red diaper babies will fret over whether Theo Ubique’s playful layers of inversion retool the show for today or undermine its political punch. For most of us, the high production values and verve of the performers offer an inverting that’s also wonderfully diverting.