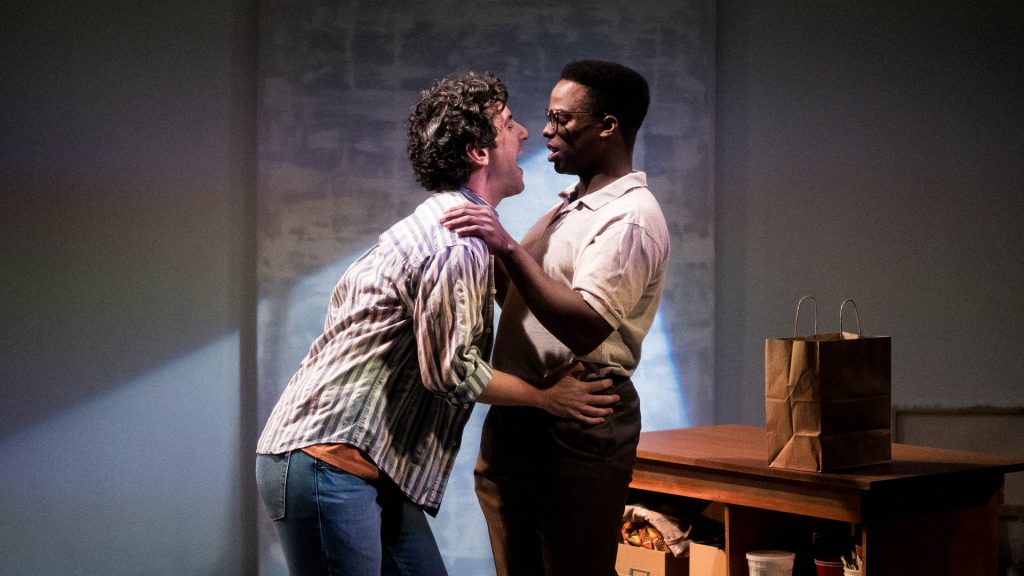 James Ijames’ “WHITE” is full of laughs, but one type of laughter kept coming up during its March 17 performance. The type that makes you cringe, slide down your chair, hold your knees to your chest and think “Oh my god did they just say that?” Transgression is the main ingredient of this kind of laughter. And “WHITE,” as produced by Definition Theatre under the direction of Ericka Ratcliff, is full of the kind of transgression that makes theater exciting.

“WHITE” is about Gus (Niko Kourtis), a queer white male painter who works exclusively with white paint, which no one but his friend Jane (Carley Cornelius) seems to like. When Jane becomes the curator of a major contemporary art museum, he hopes to get into their upcoming “New America” exhibition, intended to showcase unknown women and BIPOC artists. But Jane turns him down, of course, because he’s missed the point. Despite this being impersonal, Gus takes it personally (“Do you really see me as male?”), and so comes up with a wild plan: he’s going to get a Black actor to play the artist of his work, which will get him into the exhibition. To, you know, make a point about the real discrimination here, or something. Local actor Vanessa (Kierra Bunch) comes on board to play the fake artist, and they work together to come up with the name “Balkonae Townsend.” His plan inevitably goes south, and—no, we won’t even step near the ending. Let’s just say that those final moments flip the narrative, and by themselves endorse a return visit.

The ensemble performances maintain a balance between ever-so-slightly heightened farce and pathos that purposefully evokes sitcom acting. Gus and Jane are insufferably smug and self-centered white liberal types. We meet them while they play a drinking game over how many antiracist buzzwords they can rattle off between slurps of champagne, scoffing all the while. One word Jane never drinks to is “appropriation,” given how her jewelry, accessories, and tastes are a sample platter of other cultures. Jane represents fake-woke white feminism at its most self-congratulatory and insincere. She seems to want to do the right thing, but Diversity, Equity and Inclusion work seems to be just another look she thinks looks good on her.

That Gus ever gets a word out is remarkable because he always has his foot in his mouth, especially unpacking his attitudes on race. Other left-leaning white men’s subext on race is just Gus’, well, text. Gus is likable enough to propel the story and make you pity him, if not like him, yet his actions always point back to an egocentric need to be looked at. Gus thinks his queer identity cancels out his whiteness and maleness, and whips out his one marginalized identity whenever he’s criticized. He can’t be racist, he’s gay! And dating a Black man! And has Black woman inside him, like every gay man does! He’ll even demonstrate!

Champion of the play’s sweeter side is Tanner (Jonathan Allsop), Gus’s boyfriend and a middle-school theater director who helps Gus get in contact with Vanessa. No matter how sitcom-esque the action gets, Tanner’s conflict between love and total exasperation toward Gus grounds the play in a relatable situation: how to deal with the unexamined racism in people you love. It doesn’t hurt he has some of the funniest moments of the play, like when he’s forced to field “Am I a racist?”-type questions in the middle of sex. People get canonized for that level of patience.

From the moment Vanessa is told of Gus’ plan, she knows he’s an idiot. The two have an electric comedic dynamic: no matter how often Vanessa knocks down Gus’ arguments, he pops back up like an inflatable punching bag that complains about reverse racism. Vanessa is self-assured, and she doesn’t need Gus’ offer. She wows him (and the audience) early on with a barn-burning, leg-quaking monologue that parodies Strong Black Woman tropes in film and theater. Yet despite her reservations, she believes his plan offers her a rare opportunity: the chance to be truly, fully seen. Maybe she wants to be able to see herself, too. Case in point, Vanessa isn’t even her real name but a stage name she picked to be more, as she puts it, “cosmopolitan.” She decides to use her birth name, Balkonae, for her new artist character. Yet this act begins to blur the lines between her “real” and “fake” personas. How she negotiates with Balkonae, a curious amalgam of her own desires and Gus’ stereotypical views of Black women, becomes the engine for the second half of the play, driving us toward its truly shocking end.

This review could easily be 2,000 words long without covering everything in Definition Theatre’s production of “WHITE” that’s worth talking about. We haven’t even touched on how this is all based on a true story. (Google “Donelle Woolford.”) What’s definitive here is that “WHITE” is as thoroughly and transgressively entertaining on stage as one hopes it will be thoroughly discussed in the post-show.