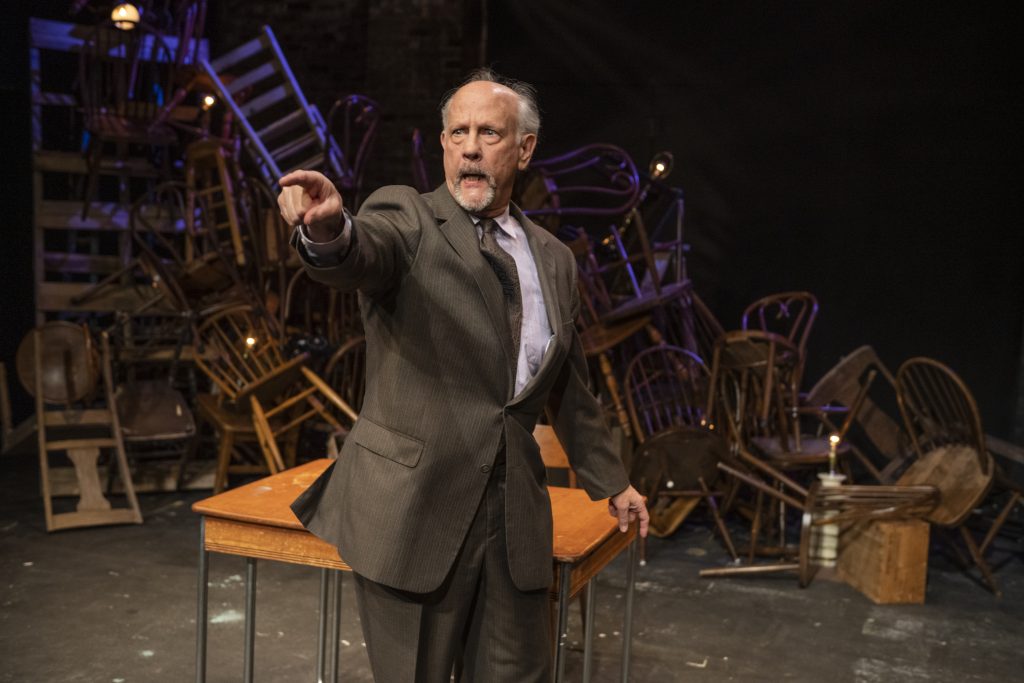 For theatergoers switching off Zoom and returning—perhaps a tad anxiously—to live events, writer-director John Kolvenbach’s “Stand Up If You’re Here Tonight” is the perfect transitional play. Featuring a bravura performance by Jim Ortlieb, this (basically) one-man show, making its Chicago debut, is all about getting reacquainted with the joys, stresses and sheer sensation of real life after a too-long hibernation.

Clocking in at under an hour, and staged with minimal fuss and maximum directness, the play packs a good deal of wit, grace and gonzo honesty into its pared-down format. Although hobbled by an imperfect ending, “Stand Up” is as relevant as it gets, boldly confronting the sustained trauma of the last couple of years, when an already fragmented and polarized society became even more virtual, atomized and just plain lonesome.

It begins with a nattily dressed Ortlieb sitting behind a cheap, battered desk, delivering a humorously unacademic lecture, one unencumbered by organization, expertise, polish, self-assurance or even, for that matter, specific subject matter. Shaky, volatile, verging on hysteria, Ortlieb’s character—referred to only as “Man”—is always on the verge of beginning… something, only to interrupt himself and ask the audience probing questions about themselves and why they’re here, tonight. What he’s interested in is the space between him and us, which he seeks to make so charged and vibrant it could “cook pasta.”

Behind the Man, on the small stage designed and lighted by Michael Trudeau, is a mound of heaped-up folding chairs. Perhaps it’s a nod to Ionesco’s play “The Chairs,” with its futile attempt to find fixed, reassuring meaning in an absurd, ever-changing universe. The precarious-looking pile also serves as a reminder of the chaos and danger we’re facing on multiple fronts at this moment.

The lecture comes off as a kind of self-help seminar for people who have spent too much time by themselves, staring at a screen. “Be here–that’s the only rule,” exclaims the Man, who is simultaneously needy and demanding. What he wants from us is simply to remember and understand what it means to take part in the communal act of live theater, with its mutual dependency between actor and viewer. The Man’s goal is not just to amuse and divert a roomful of strangers, but also to break through our defenses and form a genuine relationship with us, at least for an hour. In Romantic fashion, the playwright suggests that our capacity for spontaneity and authenticity—the things that make love and joy possible—has been damaged, and only art can restore it.

Veteran thespian Ortlieb is full of cockeyed charisma, effortlessly breaking through the fourth wall and dragging us into his passionate quest for connection.  There’s a jagged, darting, caffeinated quality to the actor’s energy that suits the endless digressions and mood shifts of his character, whose self-deprecating humor has an underlying hint of loss and melancholy. Once past its initial reluctance, the audience quickly begins to respond to the Man’s requests to clap together, to sigh on command, to stand up, to go silent, to hum—in short, to participate individually and collectively in existence, rather than being passive, isolated spectators in an electronically mediated, two-dimensional world.

All the show lacks is a proper ending. There’s a closing twist (more precisely, gimmick), which I won’t reveal, that ends up weakening the bond between performer and viewer built up so carefully over the course of the evening. My companion said she felt a pang of something like jealousy when the Man’s attention drifted away from the audience, and the play settled into a more conventional pattern. The show loses its way by final curtain, and what had been bracing and provocative begins to seem mushy and manipulative.

Up to that point, though, it works, and on a deep level. Toward the end, the Man muses about the effect he wants to produce on the audience. To entertain people, to give them their money’s worth–yes, certainly. Then he adds, after a beat: “It’s not all I want.” It’s not all we want at this troubled moment, either—we’re looking to become re-engaged and re-enchanted with life. That’s a tall order for a short theater piece. But with a little more work, “Stand Up If You’re Here Tonight” could be not just a good play, but an important one, helping us comprehend what we’ve been through and move forward in a healthy, conscious way.